Property in Kavarna region for sale and rent

When you are in Kavarna you will be definitely impressed by cape Chirakman with its cliff slope. There are remains from roman villas on the top. They had survived after the devastating earthquake in the ancient times. The front part of cape Chirakman divided and went down in the sea with the richest citizens of the town. There are well preserved Turkish bath (Hamam), medieval necropolis, interesting bridge, churches, and many fountains, one of them dates back from 15 century, in the town. In recent years Kavarna has started to become a place where a lot of concerts of popular Bulgarian and world-known bands are organized.

A lot of famous musicians and artists already bought properties in and near Kavarna and the area thanks to its growing popularity. Now with property prices dropping as a result of the global crunch it is a very favorable time to make a bargain deal. 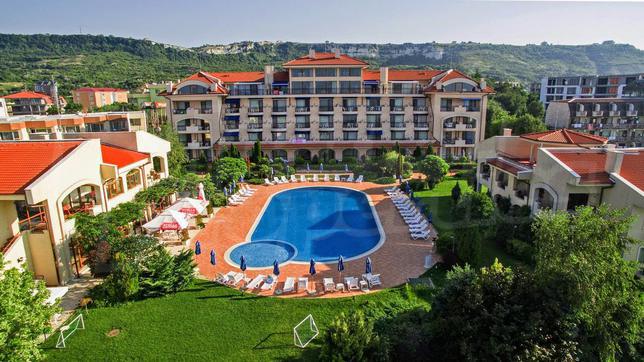 For sale
new best bargain WATERFRONT
One bedroom apartment with wonderful sea views in the gated complex Villa Romana Kavarna Furnished apartment first line from the water in complex between Balchik and Kavarna Fully furnished one bedroom apartment in a gated complex Villa Romana with luxury new apartments (2008) on the first line from the sea, within walking distance to the beach, in a picturesque area, between Balchik and Kavarna, near the prestigious sea resort Albena and three golf
€ 31 500
79.11 m2 (398€/m2)
Type of property: 1-bedroom apartment 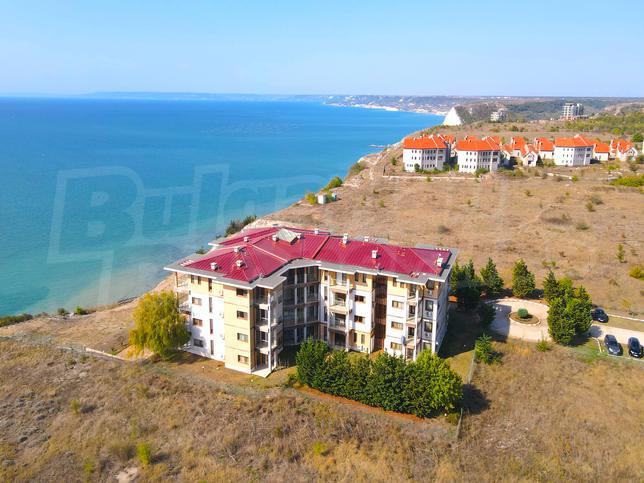 For sale
WATERFRONT
July Morning Seaside Resort Near Kavarna A panorama you cannot resist! Lifestyle in harmony with nature Complex July Morning was created as an antidote against hasty and stressful daily life of modern man, trying to escape from the over-urbanized world. The complex is directed to people trying to achieve full relaxation, avoiding mass tourism
from € 24 000
63.79 m2 - 88.62 m2 (376€/m2)
Type of property: Apartments (various types) 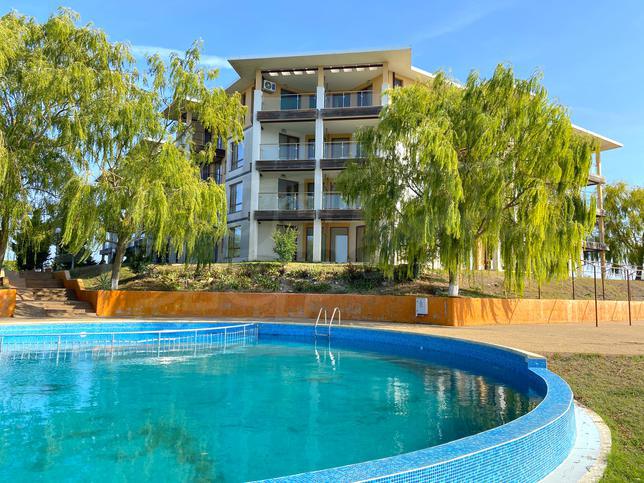 For sale
SOLE AGENT
1-bedroom apartment in Kavarna Kavarna Finished apartment in a gated complex with a swimming pool Fully finished apartment with perfect, panoramic view at a bargain price. Take advantage of the opportunity to become the owner of a unique holiday property located in the middle part of the northern Bulgarian Black Sea coast. The property is fully finished and with the right
€ 36 000
88.62 m2 (406€/m2)
Type of property: 1-bedroom apartment 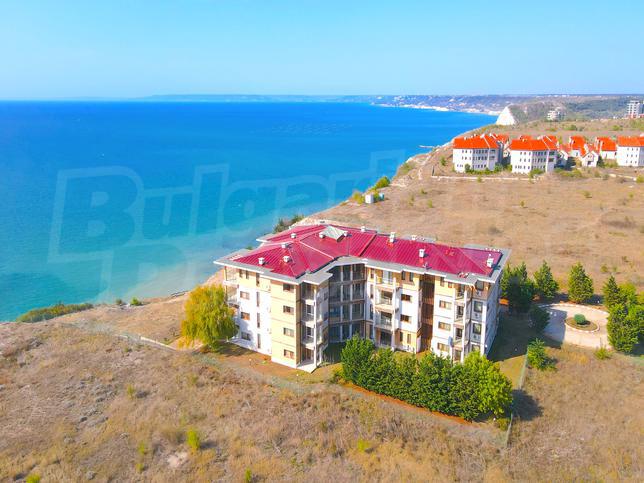 For sale
SOLE AGENTBestseller
1-bedroom seafront apartment in the area of ​​Kavarna Kavarna Spacious holiday apartment with equipped kitchenette and sea views Bargain one-bedroom holiday apartment on the first line from the sea on the northern Bulgarian Black Sea coast (with stairs to the beach). The property is a part of a gated complex with quiet, secluded location, away from the noise of the big resorts, but only 3-4 minutes by car
€ 29 000
74.55 m2 (389€/m2)
Type of property: 1-bedroom apartment 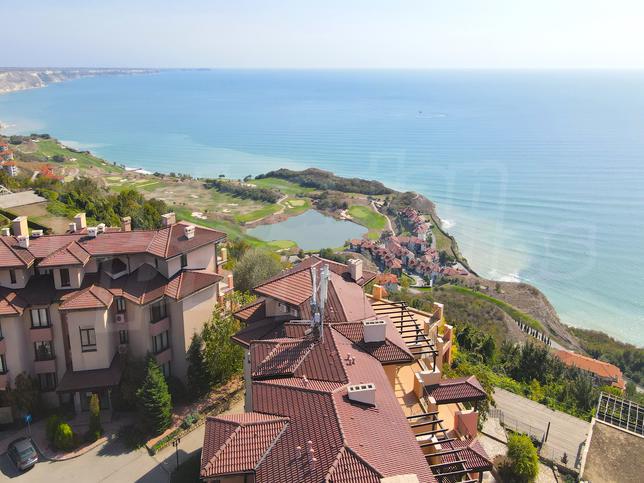 For sale
Bestseller Luxury WATERFRONT
Kaliakria Resort Kavarna , Bulgaria Golf Riviera Premium gated complex on Bulgaria's Golf Riviera Kaliakria Resort is located 55 km to the north of Varna (the Black Sea coast capital) and about 45 min from Varna International Airport. The old fishing towns of Balchik and Kavarna are nearby. The well known international resort of Albena is at a 15 min drive away. The
from € 48 900
84.41 m2 - 282.40 m2 (579€/m2)
Type of property: Apartments (various types) 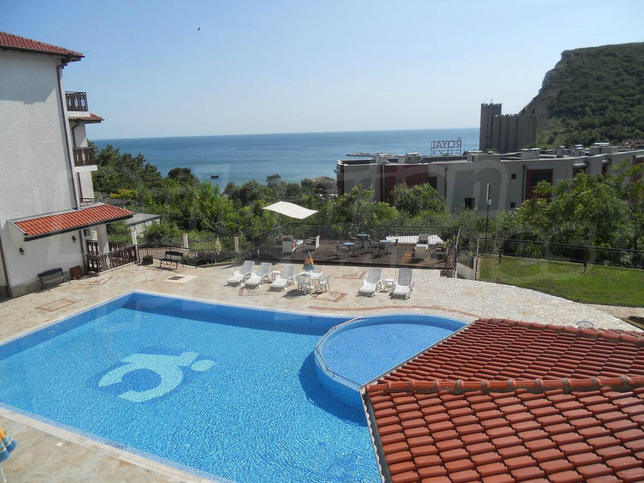 For sale
1-bedroom apartment with sea view in Kavarna Paradise complex Kavarna Maintained sea property in the coastal area of ​​Kavarna, 5 minutes from the beach We present for sale a ready to move in one-bedroom apartment with sea view in gated complex Kavarna Paradise, located 5 minutes from the beach overlooking the Kavarna Bay. The complex has a large swimming pool with sun loungers and a children's area, Wi-Fi access in common areas,
€ 25 500
61.50 m2 (414€/m2)
Type of property: 1-bedroom apartment 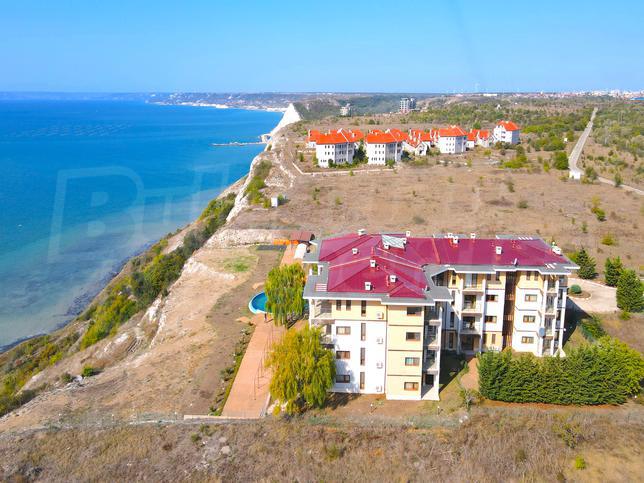 For sale
WATERFRONT
One bedroom apartment with a beautiful view in the July Morning complex Kavarna Furnished apartment in a gated complex with pool by the sea Fully furnished first line apartment with perfect, panoramic views at a bargains price. Take the opportunity to become the owner of a unique, holiday property located in the middle parts of the northern Bulgarian Black Sea coast. The complex is located in a quiet, secluded place,
€ 39 000
88.62 m2 (440€/m2)
Type of property: 1-bedroom apartment 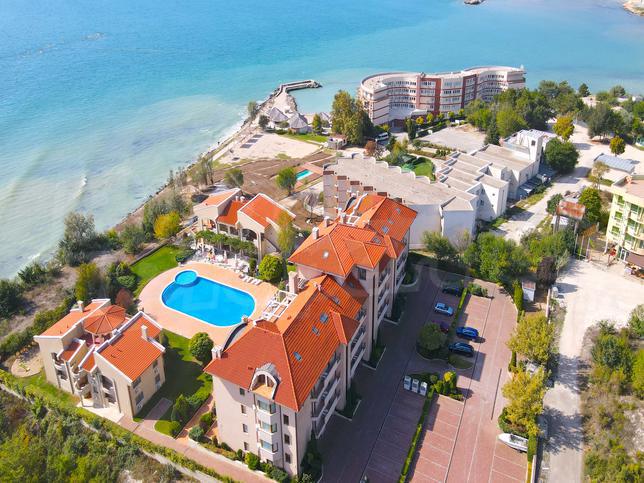 Kalin Chernev Regional Manager, Varna
Beach Villas on the Bulgarian Black Sea Coast
Searching for your own place in the sun?
Explore our selection of lovely houses and villas situated in the beach resorts and in the villages nearby! Prices with no competition in Europe!
See More 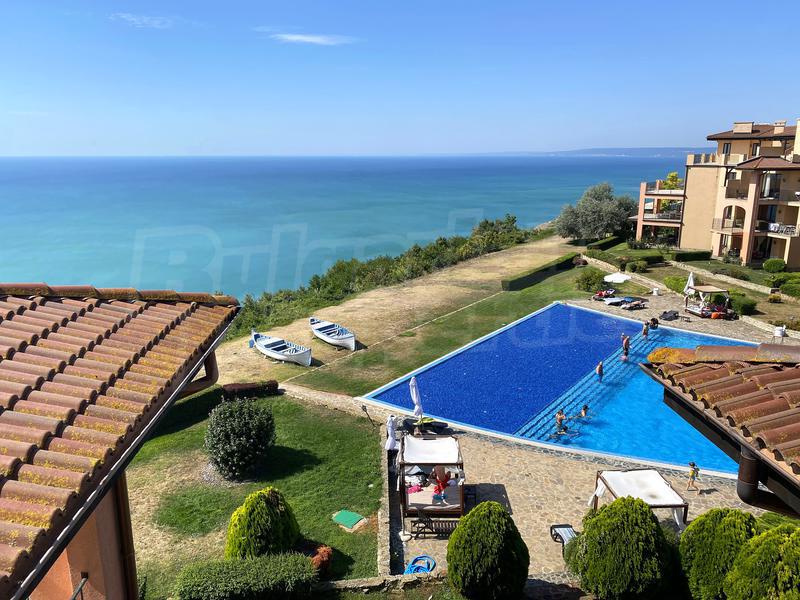 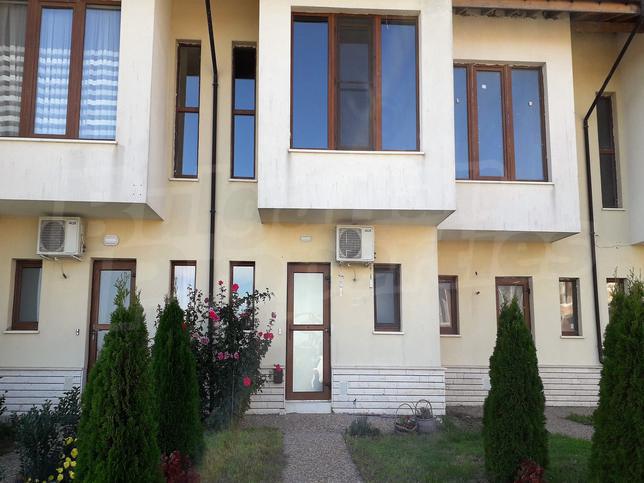 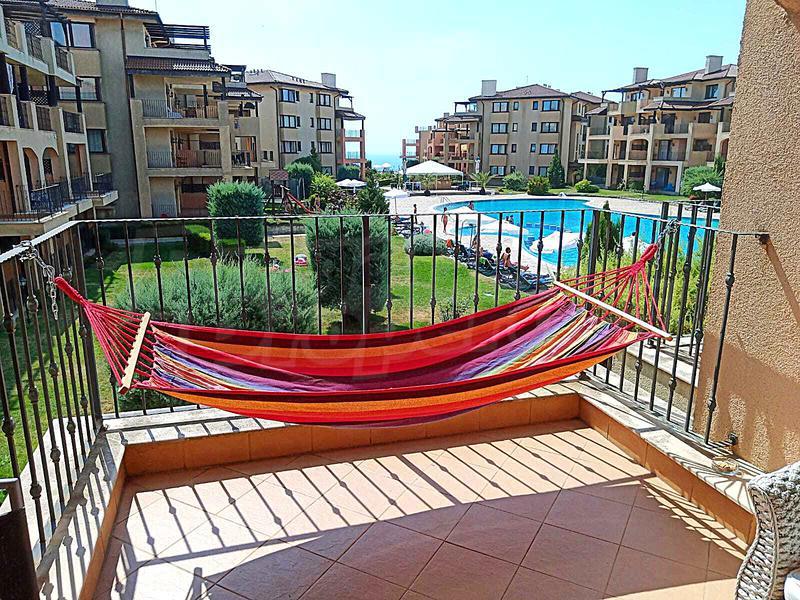 For sale
WATERFRONT
Furnished studio in Kaliakria Resort complex Kavarna Holiday apartment in a complex in the heart of the Bulgarian Golf Riviera Furnished apartment located in Kaliakria Resort complex. he resort is south-facing and is situated in the heart of the so called Bulgarian Golf Riviera and is boasting probably the best views in the area. The property has views of the pool and the sea. The area has excellent
€ 36 100
45.00 m2 (802€/m2)
Type of property: Studio 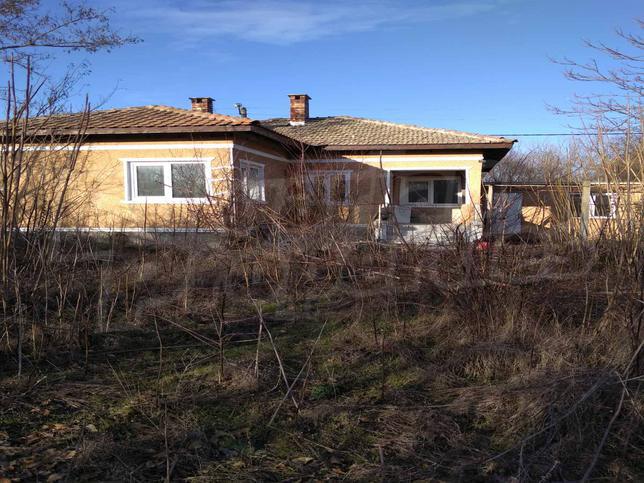 For sale
House with Garden Set 10 km from Kavarna Kavarna Property with good potential and quick access to the city and the sea One-storey house (96 sq.m.) with a garden (580 sq.m.), situated in a small and quiet village 10 km away from the town of Kavarna and the sea. The property also has a 35 sq.m. outbuilding. The space is divided between 2 bedrooms, kitchen, bathroom with toilet and entrance
€ 27 900
96.00 m2 (290€/m2)
Type of property: House 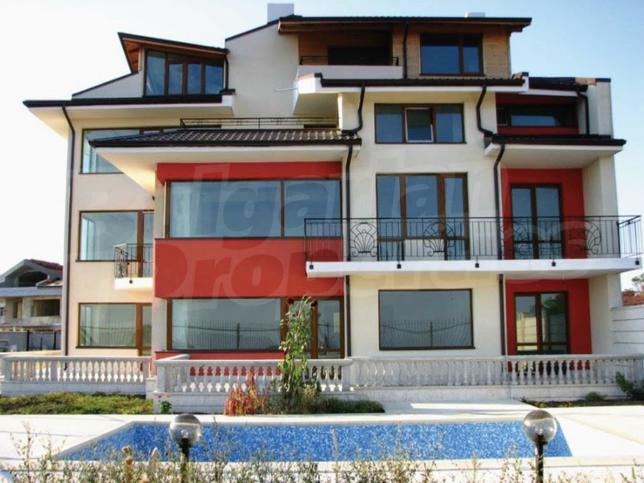 For sale
Luxury
Newly built four-storey building with sea views in Kavarna Kavarna Property with excellent investment potential as a hotel Newly built four-storey building with eight apartments of different sizes in the town of Kavarna on the Black Sea. All apartments offer direct sea views. The total area of ​​the property is 900 square meters, the living area is 680 square meters. The property has
€ 320 000
680.00 m2 (470€/m2)
Type of property: House 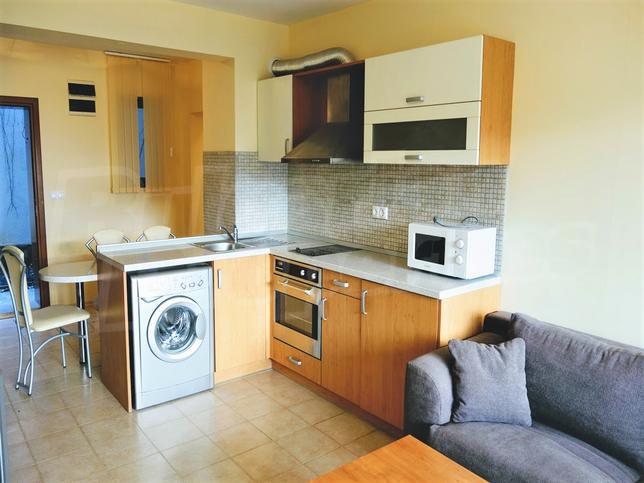 For sale
1-bedroom apartment in gated complex Kavarna Paradise Kavarna Comfortable apartment with beautiful views 3 minutes walk from the beach An attractive new home for your unforgettable sea holidays in gated complex Kavarna Paradise, located 3 minutes from the beach, in the quiet coastal area of ​​Kavarna (1.5 km to the sea town itself). The described apartment is facing west and is set on the first
€ 25 500
65.90 m2 (386€/m2)
Type of property: 1-bedroom apartment 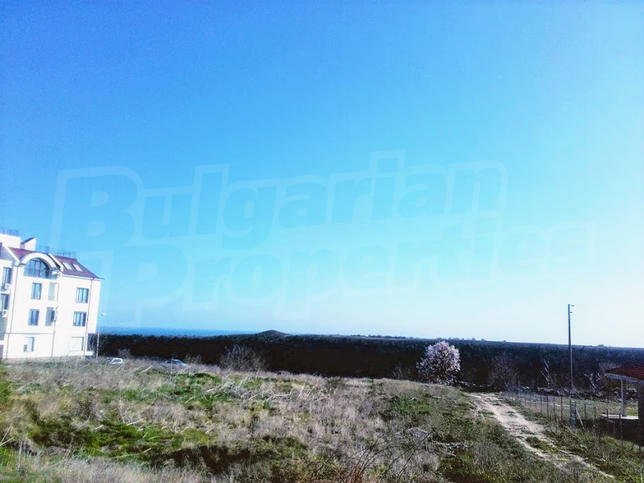 For sale
Development land for private house with sea view in Kavarna Kavarna Plot in regulation with design visa near the town hospital Attractive plot of land for the construction of a private house near a hospital, stadium and supermarket in the town of Kavarna, only 18 km from Balchik and 65 km from the international airport in the sea capital Varna. All communications are located in proximity. The
€ 11 600
580.00 m2 (20€/m2)
Type of property: Development land 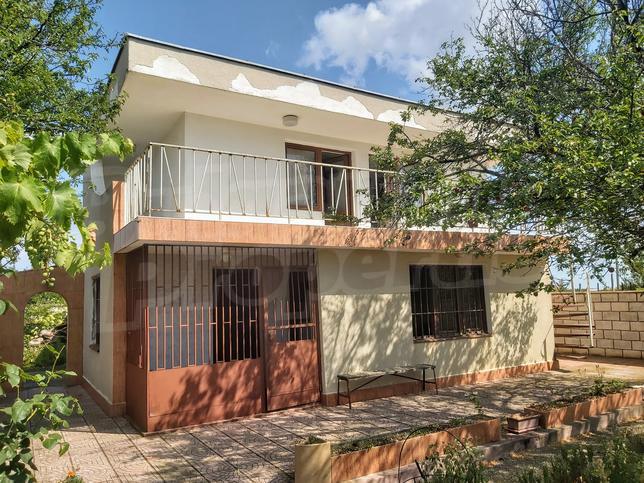 For sale
Two-storey house 300 meters from the golf course "Black See Rama" Near Kavarna House with garden in a picturesque village 6 km. from Kavarna House with garden located in a villa zone of a picturesque village near Balchik and Kavarna. Many new houses and villas have been built in the area, which are inhabited mainly during the summer season. The village is located on the slope of the heights rising above the sea, where
€ 72 000
105.00 m2 (685€/m2)
Type of property: House 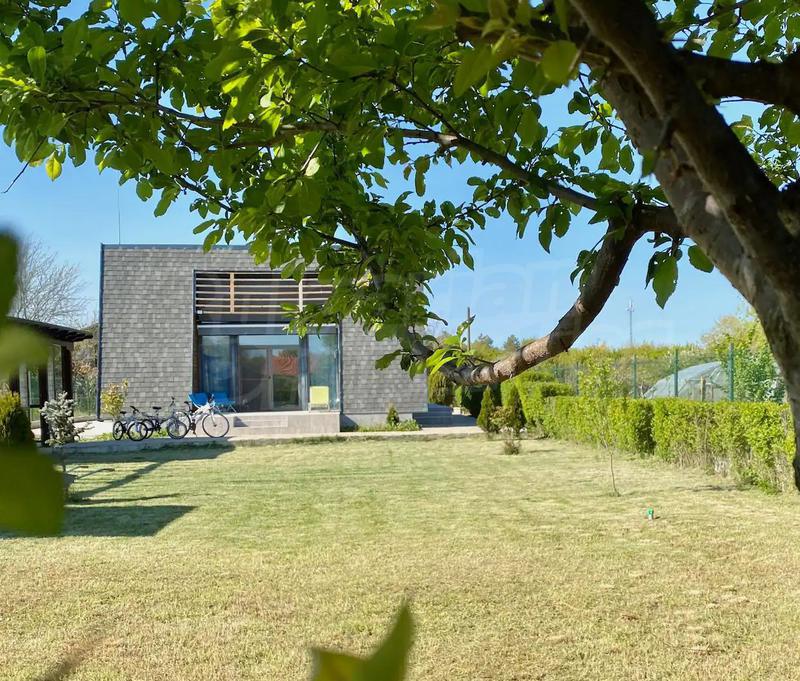 For sale -14%
Low energy house with garden in a picturesque area 16 km. from Shabla Near Kavarna Furnished house meeting the highest European standards for energy efficiency Low energy house with wooden skeletal construction and insulating. The property offers excellent conditions for year-round living and recreation, amidst the peaceful rural idyll and easy access to the golden beaches of our Black Sea coast. The property has an area of
€ 115 000€ 99 000
85.00 m2 (1164€/m2)
Type of property: House 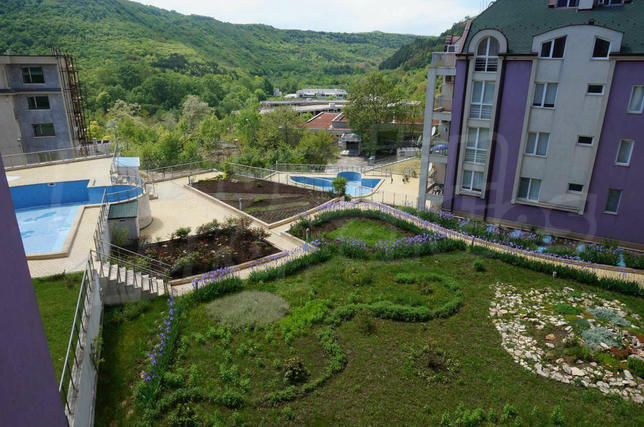 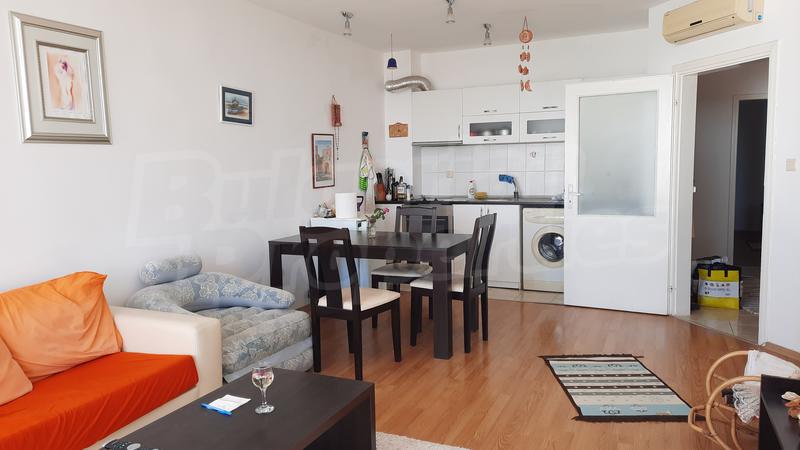 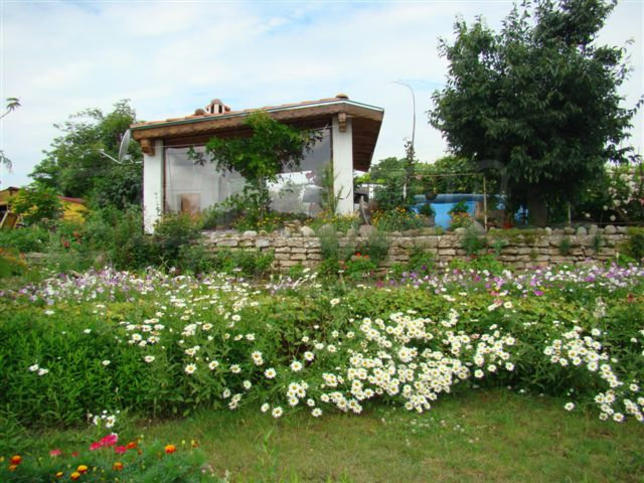 For sale -15%
A farm house near Kavarna Near Kavarna A contemporary furnished, farm house with vast land of grape vines and fruit gardens BULGARIAN PROPERTIES offer a farm house, along with a big vineyard and fruit gardens. The propertys location is convenient, because it is close to the beaches of Krapets and to the reservoir of lake Tuzlata. The houses total built up area is 150 sq.m. It comprises of
€ 198 000€ 169 000
150.00 m2 (1126€/m2)
Type of property: Villa