Property in Bansko region for sale and rent

Bansko is one of the biggest and most attractive mountain resorts in Bulgaria and during the last years it has been developed as the best and most modern ski resort. It is situated at the foot of Pirin Mountain, 160 km away from Sofia. Bansko is a small cosy town with many luxury hotels and small hostels. The lovely unique nature of Pirin Mountain flanks it. There is a lot to explore in Bansko. It is not only the magnificent slopes and venerable woods that the visitors will always remember.

Bansko, once mainly a stockbreeding and travelling merchant community, has nowadays become a centre of winter and summer tourism. The mountain peaks near the town, the numerous lakes and the old pine woods make it a popular site for recreation. In recent years, the town has gained international popularity after the start of the annual Bansko Jazz Festival and consequently the annual Bansko pop-star concert featuring top pop stars. The nearby village of Banya, located only 5 km from the town, is known for its 27 thermal mineral springs.

A new gondola lift was built in 2003 to replace a minibus ride up to the ski slopes of Todorka. The slopes are suitable for all level skiers - from the very beginners to ones who love extreme slopes. A few competitions take place annually alpine ski disciplines and also biathlon competitions. In Bansko will take part - the women's world cup for the alpine ski discplines. It is expected that the world cup for summer biathlon will also take part in the resort of Bansko. The town is served by a scenic narrow gauge railway from Septemvri to Dobrinishte. 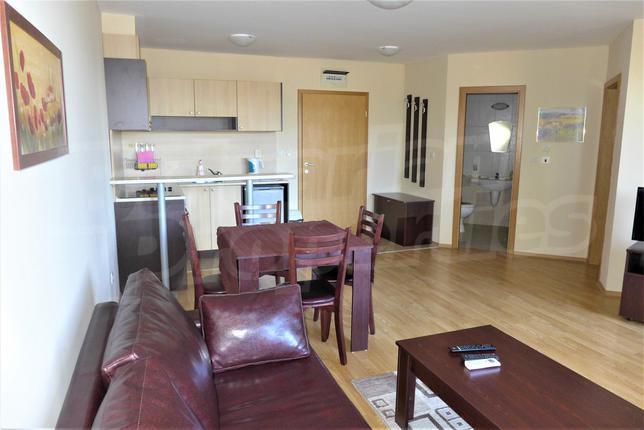 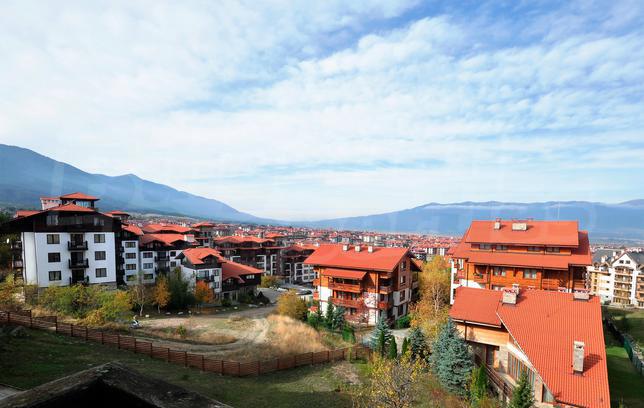 For sale
Large 2-bed Duplex Penthouse in St.Johns - Bansko Bansko , Gondola lift Unique apartment ready for refurbishment with low complex fees Spacious 2-bedroom duplex penthouse in the St.Johns Park Complex with low maintenance fees. The property is located in the picturesque area of St. John which is now becoming the most sort afetr area of the ski resort for all year round living. This large apartment comes
€ 32 500
115.60 m2 (281€/m2)
Type of property: 2-bedroom apartments 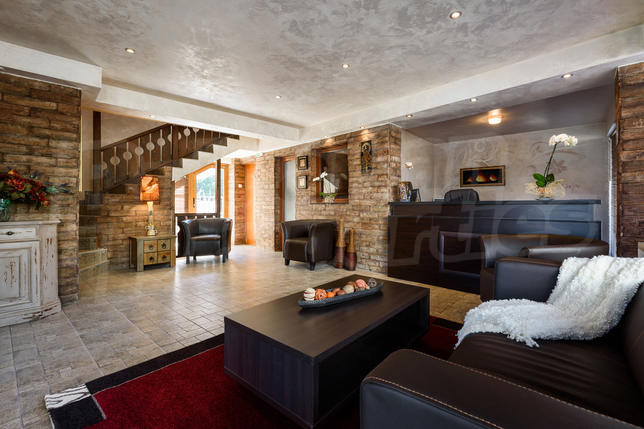 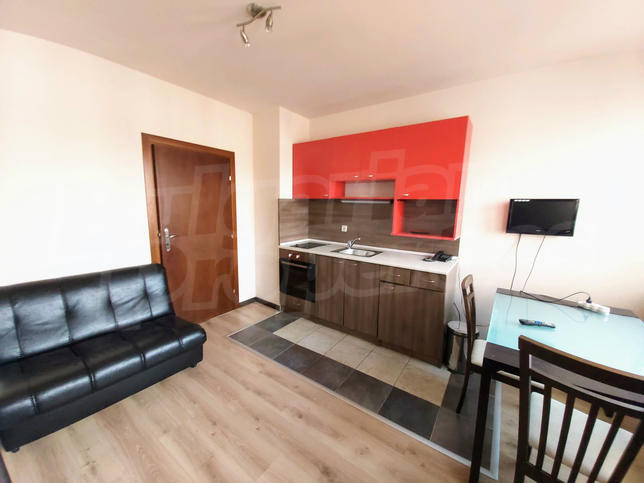 For sale
1-bedroom apartment in gated complex Royal Bansko Bansko , Quarter Gramadeto Holiday property with mountain views 200 m from the ski slopes of Bansko We present for sale an one-bedroom holiday apartment with quiet location in the new urban part of Bansko, with nice view of the mountain, close to a forest. The apartment is a part of the Royal Bansko gated complex, located 200 m from the ski slopes, with excellent conditions for
€ 21 950
47.15 m2 (465€/m2)
Type of property: 1-bedroom apartments 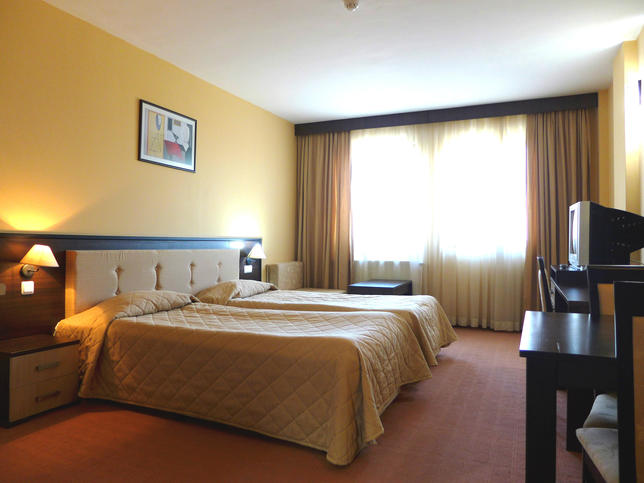 For sale
best bargain
Studio in popular MPM Guinness Hotel Bansko , Quarter Center Furnished apartment in Bansko with rental program. Pleasant holiday apartment facing east in Guinness Aparthotel complex - a four-star luxury hotel, situated at the foot of the Pirin mountain, in one of the most beautiful Bulgarian resorts - the town of Bansko. The lovely atmosphere of the hotel and the good service guarantee you
€ 19 950
39.91 m2 (499€/m2)
Type of property: Studios 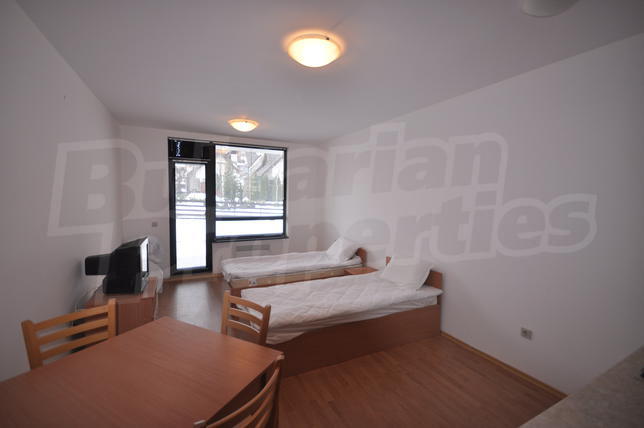 For sale
best bargain
Functional Studio in Year-round Complex Near Bansko Furnished apartment set next to a golf course and a spa center Nestled between Razlog and Bansko, in a modern complex with a spa centre and close to a golf course, this furnished studio is an attractive offer for investment or personal use. The owners and guests of the complex have at their disposal a spa and fitness centre, massages, a
€ 12 950
51.20 m2 (252€/m2)
Type of property: Studios 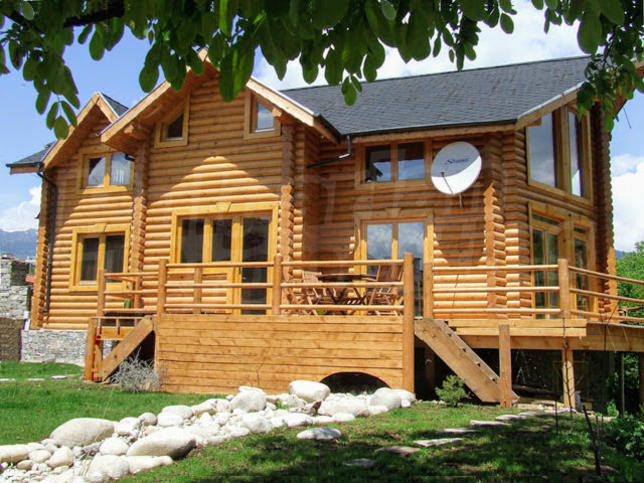 For sale
Luxury
Luxury mountain house with yard and garage near Bansko Near Bansko 3-storey wooden chalet with stunning views, modern equipment and easy access to golf course We are pleased to offer for sale a stylishly furnished and fully equipped house, ideally located within 11 km from Bulgaria's premier ski resort Bansko, 8 km from the exclusive 18-hole golf course at the Pirin Golf and Country Club and just 5 km from the state-of-the-art 4 star
€ 275 000
350.00 m2 (785€/m2)
Type of property: Chalets

Hristo Nestorov Estate Agent, Bansko
Beach Villas on the Bulgarian Black Sea Coast
Searching for your own place in the sun?
Explore our selection of lovely houses and villas situated in the beach resorts and in the villages nearby! Prices with no competition in Europe!
See More
|11|12| 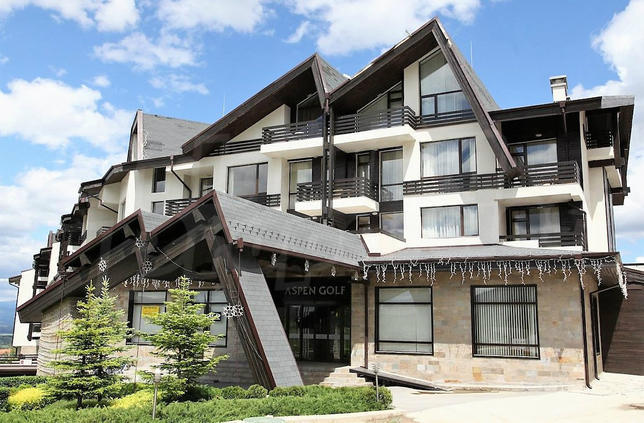 For sale
South-facing apartment in gated complex Aspen Golf Near Bansko , Golf course Stylishly furnished spacious studio near the ski resort Bansko Ready-to-move in large studio in Aspen Golf Complex, 10 minutes away from the golf course (500 m from the 5* gated complex Pirin Golf & Country Club), just 7 km from the popular ski resort Bansko and 3 km from the town of Razlog. The complex is a part of "Aspen Resort Golf, Ski
€ 22 500
59.40 m2 (378€/m2)
Type of property: Studios 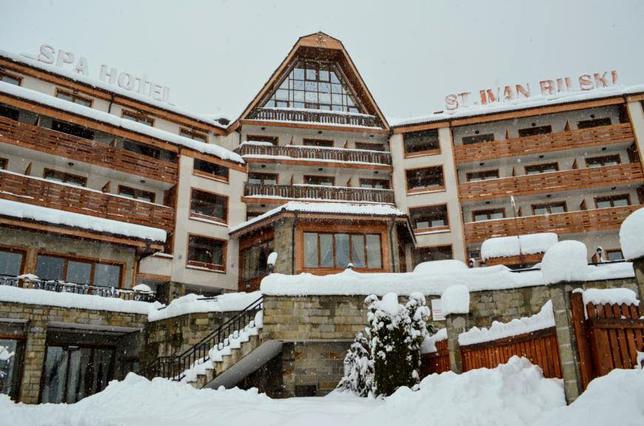 For sale
Luxury
Apartments in the luxury year-round complex St. Ivan Rilski Bansko , Mestnost Sveti Ivan Holiday homes in a top complex with many amenities in Bansko Excellent apartments in a gated complex "St. Ivan Rilski , which has some of the best amenities in Bansko ski resort. The luxury apart-hotel features a scenic location as it is built in the beautiful area of St.Ivan, next to the ski slopes, the center of Bansko and National Park
from € 40 400
95.31 m2 - 113.14 m2 (423€/m2)
Type of property: 1-bedroom apartments

For sale
Large 2-bedroom apartment 150 meters from Ski Lift in Bansko Bansko Attractive apartment located in a building with many facilities on site Modern and fully furnished 2-bedroom apartment set in a prestigious complex located a 5-minute walk from the centre of Bansko. The building offers a spa centre, an indoor pool, garage and a lobby bar with a pleasant and stylish atmosphere. The apartment is fully fitted: 
€ 39 950
84.18 m2 (474€/m2)
Type of property: 2-bedroom apartments 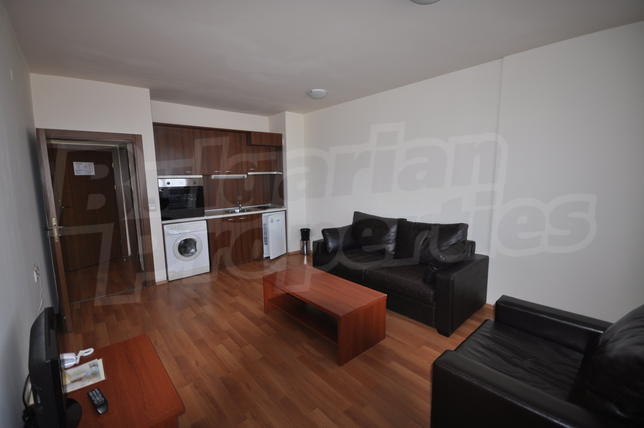 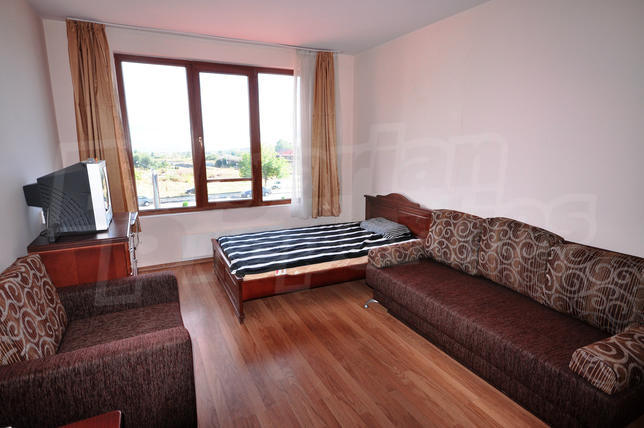 For sale
best bargain
Studio in King Samuil gated complex Bansko , Quarter Center Fully furnished apartment with low maintenance fee in Bansko Comfortable holiday home with beautiful mountain views and a convenient location in Bansko, 300 m from the bus station in the beautiful mountain resort. The property is located on the second floor of a building with an elevator and low maintenance fees (2.5 euros / sq.m.) The
€ 14 500
35.00 m2 (414€/m2)
Type of property: Studios 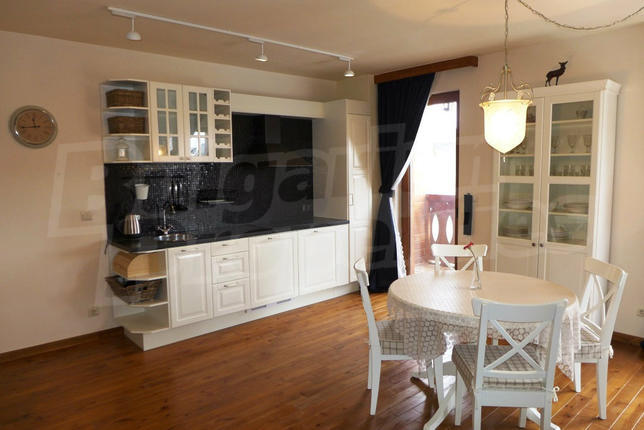 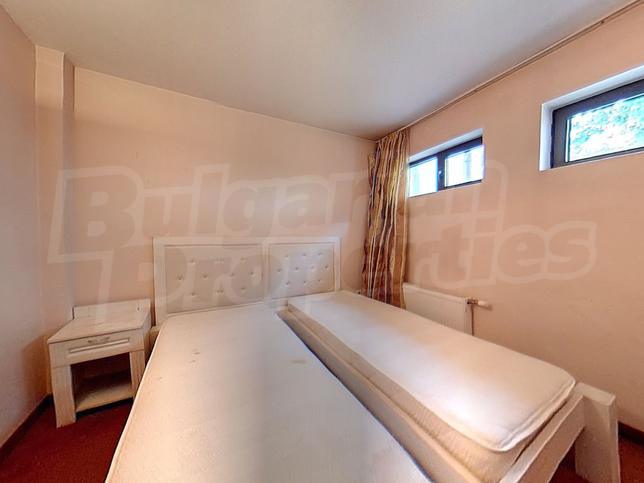 For sale
best bargain
Fully furnished studio in the central part of Bansko ski resort Bansko , Quarter Center Ready to move in bargain apartment in Friends Hotel Compact studio in the Friends Hotel, located in the central part of the most popular ski resort on the Balkans - Bansko. The complex has a functioning sauna, steam room and reception. The popular holiday resort enjoys year-round interest from Bulgarian and foreign tourists, a
€ 8 950
23.89 m2 (374€/m2)
Type of property: Studios

For sale
Furnished Holiday Apartment near the Ski Lift in Bansko Bansko One-bedroom apartment with convenient location Full of natural light, functional, fully furnished 1-bedroom apartment located 450 meters from the ski slopes of Bansko and close to the city center. The on-site amenities will make every stay an unforgettable experience, and the property is an excellent solution for both
€ 28 950
59.82 m2 (483€/m2)
Type of property: 1-bedroom apartments 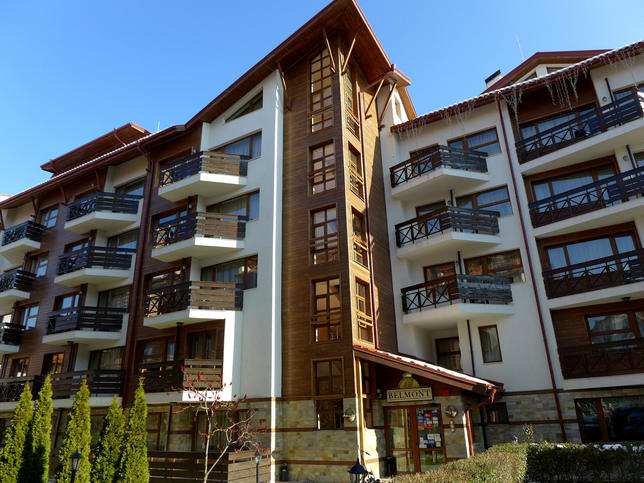 For sale
best bargain
Studio in Belmont complex in Bansko Bansko , Quarter Gramadeto Furnished studio near the ski lift Whether you are a lover of the extreme winter sports or just is looking for an oasis of peace and comfort, our new offer for the sale of a compact, fully furnished studio will interest you. The apartment is part of the new apart-hotel Belmont, offering 74 luxurious suites and
€ 17 950
38.34 m2 (468€/m2)
Type of property: Studios 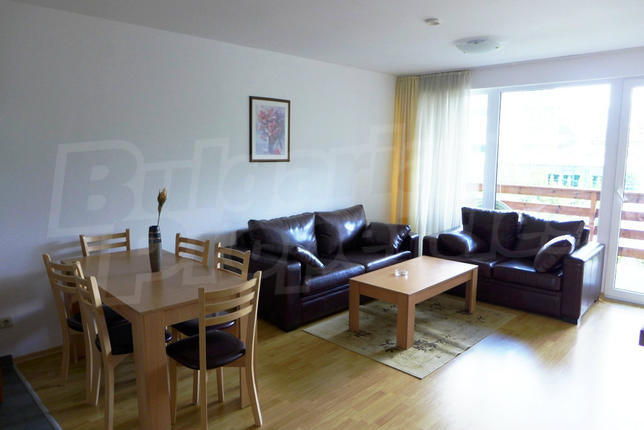 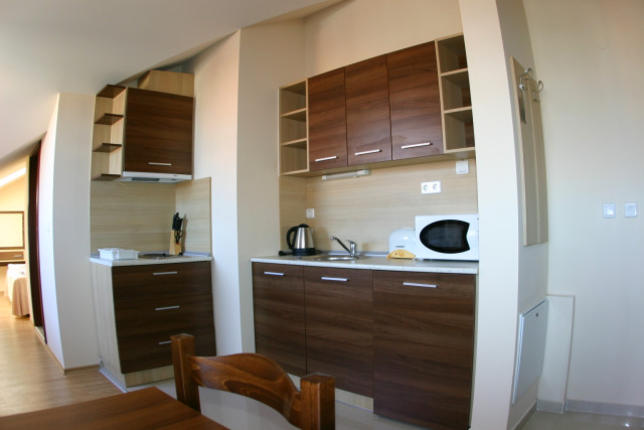 For sale -50%
best bargain
1 Bedroom Penthouse In Belmont Complex Bansko , Quarter Gramadeto Stunning views and recently reduced. We are happy to announce our new offer from Belmont complex. This is a one bedroom apartment in supreme 4* Belmont Complex that sleeps four people easily due to having a large sofa bed in the living room. The 4* Belmont complex is truly exceptional with a host of fantastic
€ 44 950€ 22 500
54.53 m2 (412€/m2)
Type of property: 1-bedroom apartments 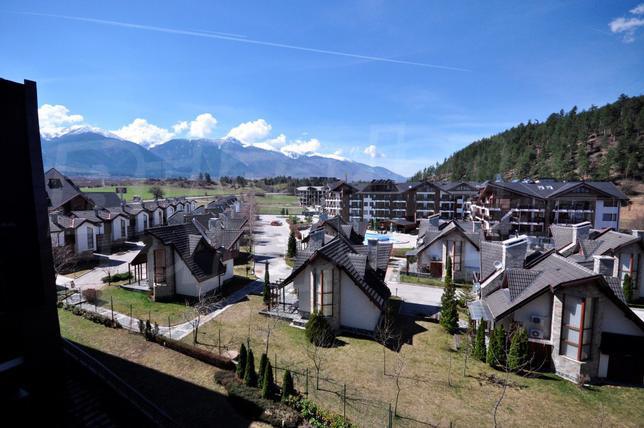 For sale -10%
new best bargain
Large Studio in Aspen Resort near Bansko Near Bansko Apartment in a modern complex with balcony and views We offer you for sale unfurnished studio located in a modern ski resort, within a 5 minutes drive from Razlog and 10 minutes drive away from Bansko. The future owners have available a spacious common room, allowing the formation of separate zones  for sleeping and
€ 9 950€ 8 950
45.85 m2 (195€/m2)
Type of property: Studios