13.11.2013 The Bulgarian property market 5 years after the start of the crisis 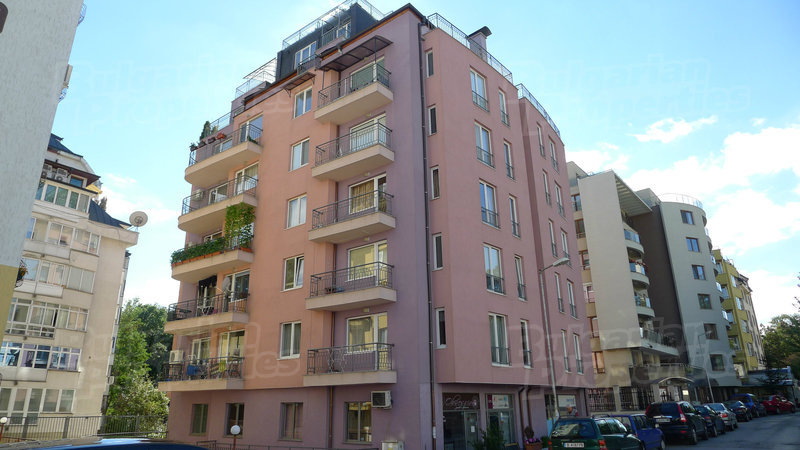 For a period of already 10 years BULGARIAN PROPERTIES has been an active player on the Bulgarian real estate market and a direct observer of the processes that have been developing both during the 5 years of property boom and the subsequent five years of decline.

Over these years the properties were one of the most discussed topics in the public space as a measure and an epitome of the boom and the followed crisis. This is because over the years we all have seen that property prices respond quickly to economic trends and show precisely and in plain language in what direction the economy is developing, whether the economy is overheating during an upward cycle, or during a crisis - how serious it is and when the economy will start to recover.

Now time has come for us to say that the information from the real estate market is showing that there are signs of a started recovery (increase in sales volumes, price stabilization, rise in the volume of mortgage loans, etc.). On that basis we can conclude that the market bottom has been reached, property prices have stopped falling, the property market is now balanced and stabilized, deals have increased and the process of a slowly but steady recovery has started. 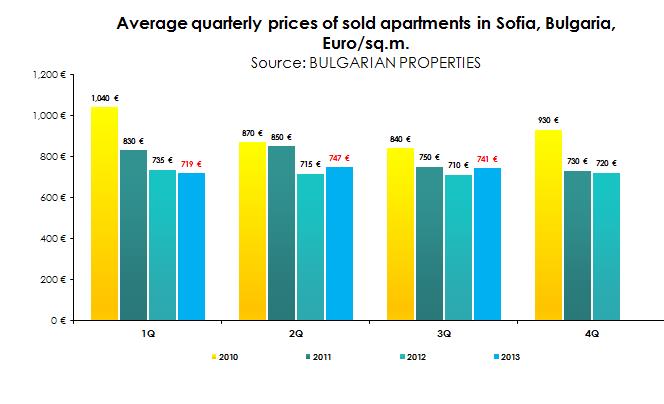 On the one hand, this happened thanks to the constantly increasing interest and the purchases of holiday properties on the Sea by Russian buyers - a positive market influence which has spread to the other market segments. On the other hand, the relative economic stability and the decline in interest rates on mortgage loans to their lowest levels since the spring of 2006 contributed to a more active local market.

Also, in 2013 the property market experienced an effect of catching up as a result of a delay in decision making over the past 5 years and this contributed to the overall improvement of the market picture and the turning of the mood of the market participant in a positive direction.

Undoubtedly, the recovery will be a slow process, but we now have a reason to stop talking about crisis and start talking about a post-crisis period, which marks the beginning of a new stage of the development of the property market in Bulgaria. This new period we cautiously call a stage, and not a cycle as the cycle envisages an upward trend, while in the current market and economic situation it is more realistic to expect that the current prices will remain for a longer period of time. 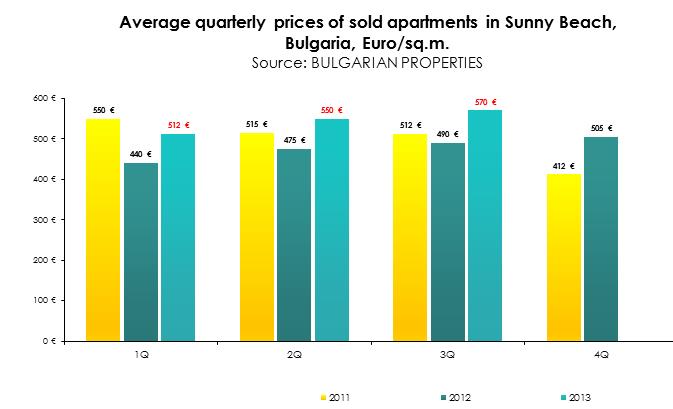 We can summarize that Summer 2013 was quite successful for the real estate market. The past quarter is characterized by large dynamics, both in summer resorts and in major cities. The enquiries from potential buyers rose by 20% year-on-year and property sales increased by 5% in the third quarter of 2013 compared to the third quarter of 2012, according to figures of BULGARIAN PROPERTIES.

The largest group of buyers remains the Russian buyers in the third quarter. According to BULGARIAN PROPERTIES data, they account for 40% of all buyers of residential and holiday homes in Bulgaria in Q3. The second largest group on the market is the Bulgarian buyers who purchase mainly in big cities and especially in Sofia. 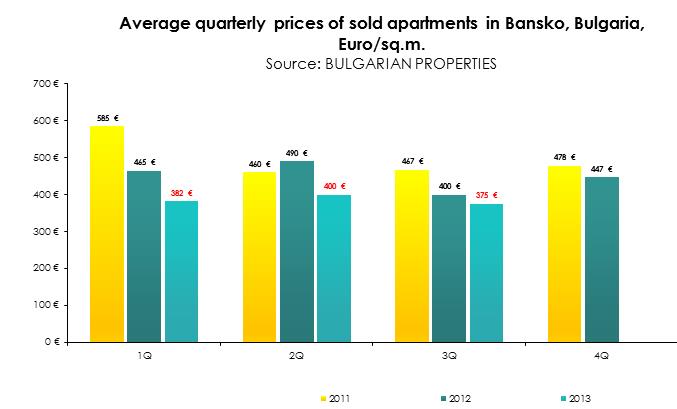 These figures and the data we collect in a monthly index based on listing prices of properties in Sofia show that the market bottom was reached probably in the second half of 2012 and in early 2013. Now we can talk about beginning of market recovery in the capital, as of course, this does not mean that the recovery will be expressed in a rapid increase of prices, but rather it will lead to a moderate and sustainable growth in a medium and long-term period, closely related to the overall macroeconomic indicators.

According to our subsidiary brand LUXIMOTI, there has been an increase in the interest and there have been more sales in the segment of luxury properties. In 2013, new significant projects of premium class were launched both in Sofia and Varna, and in some Bulgarias seaside resorts where Russian buyers are more active. Overall, wealthy buyers come back increasingly to the elite real estate market and conclude more deals.

Sunny Beach and the sea

The seaside holiday properties are coming out of the crisis and during 2013 they continue confidently to attract a significant amount of interest. The sales have increased by 20% in the third quarter of 2013 year-on-year and the prices have started to creep upward. This trend has been observed for some time now in our monthly indexes based on the listing prices in Sunny Beach and now it is confirmed by the prices based on actually concluded deals.

In 2013, the ski resorts remained under pressure of a relatively weak demand and the prices have not managed to stabilize there. It seems that the properties in the ski resorts will recover most difficult from the crisis, which in turn gives opportunities for bargain purchases as the prices are currently at their absolute minimum.

The average price of sold apartments in Bansko for the third quarter of 2013, according to BULGARIAN PROPERTIES data, was 375 Euro/sq.m., which represents a drop of -6% compared to the second quarter (400 Euro/sq.m.) and a fall of -6% year-on-year.

The situation is similar in Pamporovo - the average price of sold apartments was 375 Euro/sq.m., while recently there has been an increase in the interest from both Russians and Bulgarians.

Borovets continues to hold the highest prices and deals are concluded at prices around 600 Euro/sq.m. on average.

Russian buyers are most active in this segment as well and they account for 30% of the total number of rural properties buyers in 3Q 2013. They are interested mainly in the villages around Burgas, Stara Zagora, Plovdiv and Yambol. The second largest group of rural property buyers are British (20%) , as long as they still buy properties in Bulgaria, they are most active in the segment of rural properties, which has always attracted them as they seek peaceful environment and return to nature. Their interest has been directed towards the villages around Veliko Tarnovo, Plovdiv and Vidin in the past quarter.

Bulgarian buyers are presently not actively buying rural properties - they account for about 10% of all buyers. There has been an interest to villas in order to move to a quieter place, but a number of factors are delaying the realization of these buyers ambitions (e.g.: macroeconomic uncertainty, other priorities, purchase of a first home in a city, etc.).

The rural properties are very interesting segment of the market and we can say that they attract a variety of clients such as nationality Belgians, Canadians, Estonians, Italians, Germans, French people, etc. In the past months buyers of more expensive and ready to move in houses were dominated and therefore the average price of rural properties sold in the third quarter of 2013 was 22,300 Euro (compared to 19,400 Euro in the previous quarter).

Sales of rural properties remain at levels around 80% lower than during the property boom, and the average prices at which sales were concluded are about 20% lower than prices in their peak. However, we should have in mind that the quality of rural houses is very different from before. If in the market peak 20,000 Euro was enough to buy a house in need of major repairs, now for the same amount you can buy an excellent rural house which is ready to move in.

The average prices of sold rural properties in the third quarter by regions:

Share
Properties in Bansko
Buy your own property in the top ski resort of Bansko! An all-year-round resort suitable for winter and summer tourism with the best prices in Europe! Prices starting from as low as 10,000 Euros!
See More
Come for video viewings of properties in Bulgaria!
Only on our website you will find thousands of properties situated all around Bulgaria for which we have shot videos. Don't waste time, view them online - on your phone, laptop or tablet, at a convenient time and without the need for an inspection trip and personal visit. Welcome for video viewings with BULGARIAN PROPERTIES!
See More
Follow us