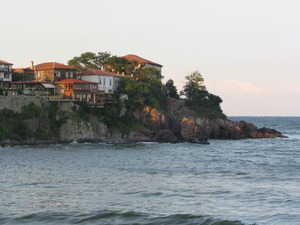 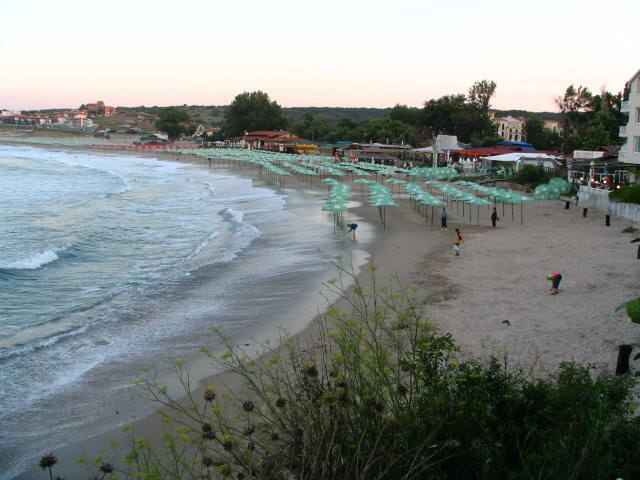 ...one of the most popular beach resorts in Bulgaria. Preferred by people for its casual ambience and ancient atmosphere.

The town of Sozopol with population of 5,000 people is situated 34 km South-East of Burgas, and 420 km south-east of Sofia. The town lies on a small rocky peninsula in the farthest southern area of the the Burgas Bay. A 100 metre long strip of land connects it to the mainland. After 1925 the town started to grow in the direction of Harmani Area and today it occupies considerably larger territory on the mainland.


The first settlements belonged to the Thracian tribes of Nipsei and Skirimian. In 7th century BC Greek colonizers settled there and called the town after Apollo, the God of arts. Apolonia developed mainly as a trading centre for honey, wax, corn, wine, olive oil, olives, textiles, jewellery, and pottery. The numerous finds are evidence that this small town used to be the trading centre of the whole of the Black Sea coast. Much earlier in 13th century BC the Argonauts led by Iazon, Heraklitis and Orpheus came ashore. The love for travelling and discovering made the inhabitants of Apolonia in those times travel, trade and found new colonies. So were founded the settlements of Anhialo and Pirgos, Termopolis and Aetos. The town was included in the union of sea town states founded by Percales.

Apolonia was frequently in economic and political dispute with the Doric inhabitants of Messembria; wars were even waged. At the time the island of Kirik was mainly inhabited. Apolonia sought help from Philip of Macedonia against the attacks of the Scythians. It was included in the territory of the Macedonian State at the time of Alexander the Great and was constantly subject to invasions but it struggled against the attacks of a number of Nomadic tribes flowing from north and west. The town fell under Roman domination in 1st century BC and was severely ruined by the armies of Marcus Lucul. It is an interesting fact that the Romans quickly restored the ruins, built new temples, and ordered a 13 metre high statue of Apollo by the sculpturer Kalamis. The statue was sent to Rome as an example of the arts of this particular Roman province. As early as 6th century Apolonia minted coins of its own.

The Roman domination provided three centuries of peace until the invasion of the barbarian tribes. It was only in 5th century that the town was included in the territory of Byzantium. During the reign of Khan Krum it was within the borders of Bulgaria and like all other sea towns it frequently fell under the rule of Byzantium. In the Middle Ages it preserved its status of a district town. It was severely devastated in the middle of 14th century during an attack by the Genoa fleet. Later it was conquered and sold by the knights of Amadeus of Savoy. After a long siege the town fell under Turkish rule in 1453.

Only wooden houses have been built there ever since; the oldest samples can be observed even today in the unique old streets.

Sozopol welcomed the Liberation as small fishermen's settlement. Later the town became the biggest fishing centre of the Black Sea coast and developed recreation and tourism.

The landmarks in Sozopol are many, but none of them can be separated from the rest since all of them impact the visitors as an attractive ensemble. The ancient churches from the Revival Period - St. Zosim Church and The Holy Virgin Church. The following houses are quite interesting: the house of Dimitur Laskaridis (17th century, now an art gallery), a fish trader, Ana Trendafilova's (the house with the sun), of Kourtidis, Una Psarianova's (now arranged as Stenata Restaurant), of Grandmother Koukoulissa Hadzhinikolova (today housing the office of Sturshel Newspaper), Metropoliev's House (a medical centre at present), of Kreanoolu, etc.

The old cobbled streets and high fences in front of which the old women sit and chat, knit laces and sell fig jam, are inseparable elements of a whole complex of 3 centuries of history.

Interesting places to visit are the Archaeological Museum and the Art Gallery. At the beginning of September each year the town hosts the big Apolonia International Art Festival Accommodation. There are lodgings in the old part and in the new part of the town as well.

There are a lot of camping sites around Sozopol where many tourists spend their holidays: Kavatsite (The Willows), Smokinya (The Fig), Vesselie (Feast), Zlatna Ribka (Golden Fish) and Gradina (Garden). They offer bungalows of different categories, sites for caravans, tents and automobiles.

The traditional establishments are the small coastal restaurants, small private places both in the old and new part of the town, the stalls for fish, the pizza-huts, the snack-bars scattered all over the camping sites. Interesting catering establishments are Vyaturnata Melnitsa (The Windmill), Sozopol Tavern, Athens Tavern, the restaurants Xantana, Neptun, Drouzhba Fishing Boat, Orpheus, Olymp and Lilia. Some of them are very interesting as they are built on ancient remains and houses after detailed archaeological research and restorations. Such an example is Stenata Restaurant (The Wall) whose basements were used as a warehouse for grain far back in time, and Kladenetsa Restaurant (The Well) which was built at the place of a spring, which supplied the town with drinking water via water pipes. The prices at the restaurants are high, moderate prices one can enjoy at the camping sites and in the small restaurants along the beach. There are a lot of grocer's and market places. One could buy fish directly from the fishermen at the quay.

Around Sozopol: To the north is the well known resort at the village of Chernomorets, which borders the Gradina camping site. To the south of Sozopol there are a number of fjords-like formations. The coast here is particularly high and cut in by the incoming waves. There are numerous secluded coves. Mt. Bakurluka (376 m high) is above the town, and some 20 km to the south is the mouth of the Ropotamo River. There is a biosphere reserve, camping sites, very near is the famous Zmiiski Island (Snakes Island).

Beaches: In the town there are 2 beaches - 1) Central beach and 2) Harmani beach. On 3 km north from Sozopol we recommend the Golden Fish beach.

Accommodation: Old town only private rooms. New town few nice hotels and private rooms. For the available accommodations, please browse the left table of this page. For safety and comfort reasons we recommend you choose a hotel.

General impressions: Very popular resort. Gets very busy during the summer. Good variety of restaurants, cafes, night clubs, 2 cinemas, shops, etc. In general the prices are lower than the international resorts (Albena, Golden Sands, Sunny beach, etc.), but higher than the resorts of Kiten, Varna, etc. Sozopol can be compared to Nessebar and Primorsko.
What to do: Everything is available here, but the most interesting thing is probably the old town with its interesting old-style wooden houses (some of them are national monuments).
Internet access: Widely available in the new town Internet cafes on the main street. The cheapest Internet cafe is the one in the building of Central Post office in the new town (BTC).

Transport to the resort: Many public buses go from Bourgas and the neighbor resorts to Sozopol. The easiest way is to catch a bus from the Bourgas central railway station or the bus station.

If you are coming by car from the city of Bourgas take the road going to the south and the resorts of Chernomorets, Primorsko, Kiten. The distance from Bourgas is 34 km and road is very good. Follow the signs to Sozopol. Reaching the town turn right for the New town and left for the Old town. The access by car to the old town is limited.

There are no restrictions to enter the New town by car. Be careful, during July and August (the busiest time) the traffic is quite heavy and it is very difficult to find place for parking in Sozopol. We recommend you leave your car on one of the guarded parking lots in the new town. The price for 24 h is around 2 $ per car. Any type of the standard fuels are widely available in Bulgaria and the area of Sozopol - petrol, unleaded petrol, diesel, LPG, etc.

Medical and dental services: Get a tourist health insurance for Bulgaria from your local insurance company to make sure that any medical expenses will be covered. First aid and standard medical help in Bulgaria are free of charge. Dental services are not free of charge in Bulgaria. You can get dental service from both private and state clinic/dentists in Sozopol. For more information, please ask on the reception desk in your hotel.

Properties for sale in Sozopol

Book a holiday or reserve a hotel room in Sozopol

Share
Unique residence in Old Town Nessebar
A property you can't find anywhere else in the world! OLD NESSEBAR only exists in Bulgaria and we have a unique residence for sale in this ancient city which is part of UNESCO's list of World Heritage Sites. Find your home in a place of timeless beauty which has survived through centuries and has preserved the wisdom of many cultures and civilizations. Visit this traditional-style new build residence now with a 360-degree virtual tour.
See More
Beach Villas on the Bulgarian Black Sea Coast
Searching for your own place in the sun?
Explore our selection of lovely houses and villas situated in the beach resorts and in the villages nearby! The best prices in Europe!
See More
Properties with video
Only on our website you will find a variety of properties in Bulgaria with videos. Don't waste time, view them online - on your phone, laptop or tablet, at a convenient time and without the need for an inspection trip and personal visit. Welcome for video viewings with BULGARIAN PROPERTIES!
See More
Follow us