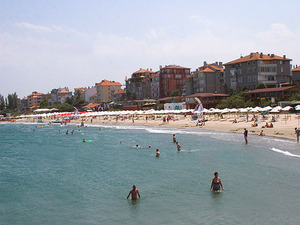 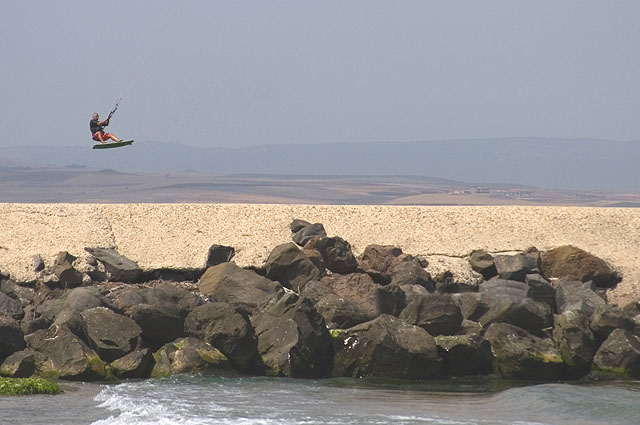 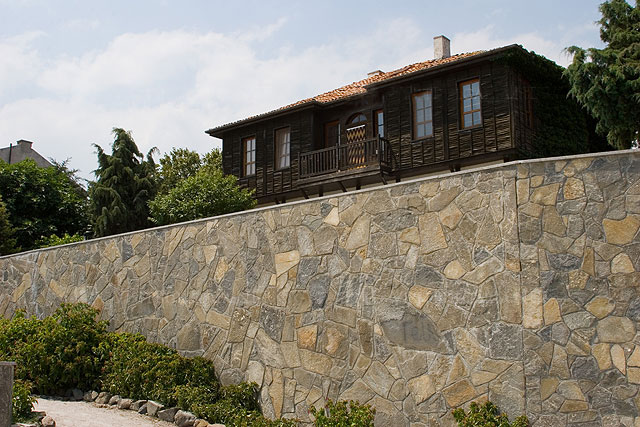 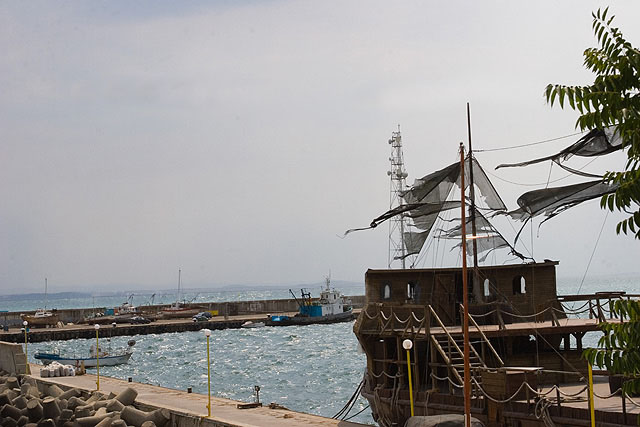 The town of Pomorie (population: 14 560) is situated on a peninsula projecting 5 km into the sea. The peninsula is 18 km north-east of Bourgas, and 408 km east of Sofia. Before entering the town one passes through a long and narrow causeway between the sea and the firth. The firth of Pomorie borders the peninsula and this gives the impression of jutting out into it.

There used to be a Thracian settlement here colonized by the Greeks in later times. A colony of the metropolis of Messembria was founded here in 5th century BC. The town was called Anhialo being at the same time a colony of Apolonia as well (today's Sozopol).

The main occupation was fishing, mining and trading of sea salt. The shallow firth presented ideal conditions for that - it was where the first settlers discovered layers of salt in the sand. The ancient town was situated further inward onto the land in the area called Paleokastro where one can see its ruins scattered all over. During the Roman domination Uipia was added to the name of the town and it surpassed even Apolonia in its glory for a long time. Anhialo regained its name in the Middle Ages. It suffered barbarian invasions and in 8th century it was rebuilt by the Byzantine empress Irina. The town was intermittently under Bulgarian and then Byzantine domination, and vice versa, but more often in the Bulgarian territory. In 1366 it was conquered and resold to Byzantium by Amadeus of Savoy and his knights. It fell under Ottoman rule together with Nessebur in 1453. After the Liberation the town regained its power and was of utmost importance in the Bourgas Bay. In 1906 the town burst in fire and nearly burnt down. It is known as a salt-mining centre; fruits and vegetables grow here; wine and tin productions are traditional for the place. Today the main occupation of its inhabitants is tourism; there is a mud-cure establishment.

The mud-cure lake was discovered in 3th-4th centuries BC and was later called the Holy Lake by Anna Komnina (a Byzantine female writer). The first mud-cure establishment was built here in 1902 after the curing properties of mud unique for Europe had been proved. The mud is good for bone and muscular disorders, radiculitis, rheumatism, sciatica, lumbago, discal hernia, etc.

Interesting sights: The old churches - the Transfiguration Church (dating back to 18-19th centuries has a valuable iconostasis and icons) and the Assumption Church (19th century). A stone bas-relief of St. Georgi is preserved in the St. Georgi the Victorious Monastery of Pomorie. A museum collection is arranged in the house of Peyo Yavorov, the reknown Bulgarian poet and there is a monument to his honor near the Yavorov Rocks. A domed tomb-mausoleum (3th-4th century) was found in the area of Kouhata Mogila near Europa Camping. It is interesting for the construction resembling a funnel and is open to visitors.

The most famous restaurants in the town are Tsarevets Restaurant and Peneka Restaurant. Apart from the restaurants at the hotels there are a number of small private establishments, refreshment stairs and shops. One can buy fresh fruits and vegetables at low prices from the local inhabitants directly or at the marketplace. Some rest homes (more than 30 in number) allow non-residential clients to dine at reduced vouchers.

Regular town transport connects Burgas to Pomorie. Route taxis, minibuses and ordinary taxis run along the same route. Private water transport to Burgas and Nessebar can be used upon agreement.

Despite Aheloy, the village of Sarafovo is 6 km south of Pomorie. Burgas Airport is near the village and is open to international flights, too. The village is situated on the seashore and this in itself gives opportunities for recreation. Lodgings are offered. There are pleasant beaches. Atanassovo Lake is located to the south of Sarafovo in a large lagoon. The waters of the lake are salty and used for salt-mining.

View Properties for Sale Near Pomorie

Share
Beach Villas on the Bulgarian Black Sea Coast
Searching for your own place in the sun?
Explore our selection of lovely houses and villas situated in the beach resorts and in the villages nearby! Prices with no competition in Europe!
See More
Unique residence in Old Town Nessebar
A property you can't find anywhere else in the world! OLD NESSEBAR only exists in Bulgaria and we have a unique residence for sale in this ancient city which is part of UNESCO's list of World Heritage Sites. Find your home in a place of timeless beauty which has survived through centuries and has preserved the wisdom of many cultures and civilizations. Visit this traditional-style new build residence now with a 360-degree virtual tour.
See More
Borovets Gardens 2 - the second phase of the popular complex
Feel at home in Borovets! Buy your own vacation apartment in one of the best rated complexes in this top mountain resort. Completed construction, with ACT 16. Available apartments at attractive prices, no buyer's commission. Suitable for rental income.
See More
Follow us