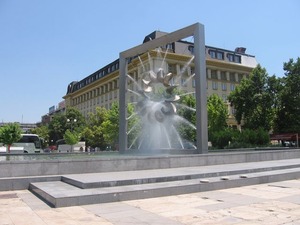 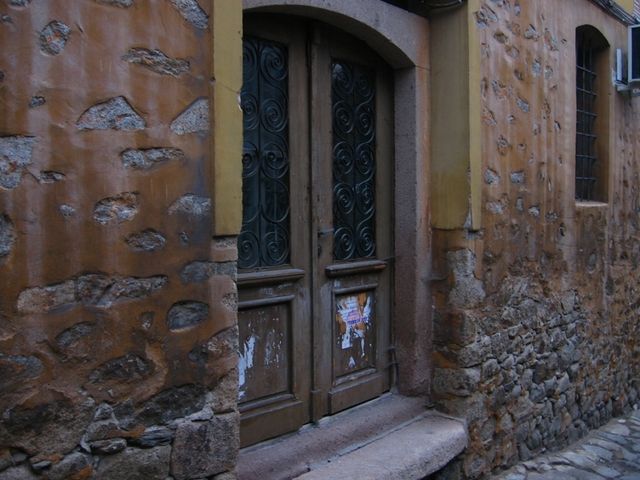 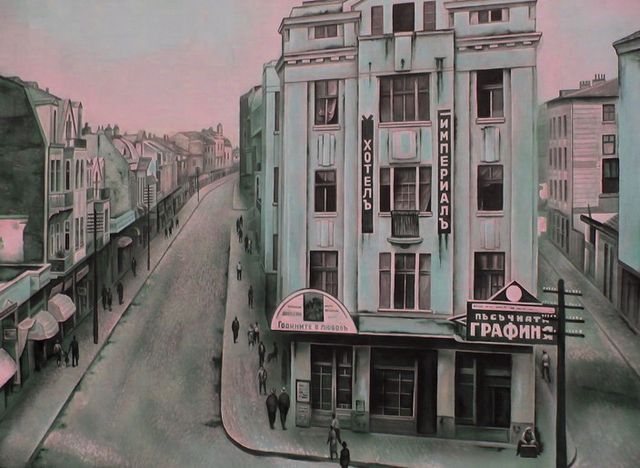 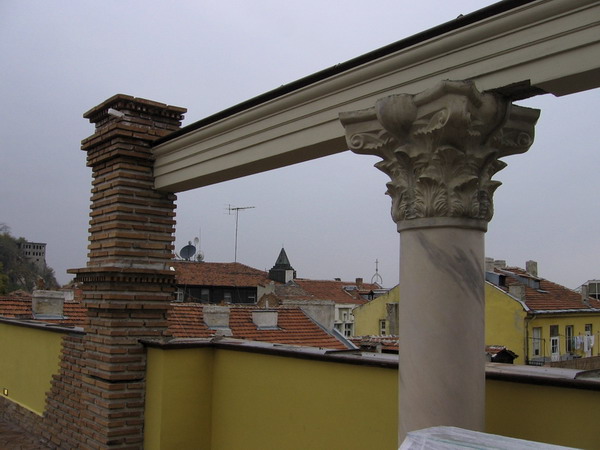 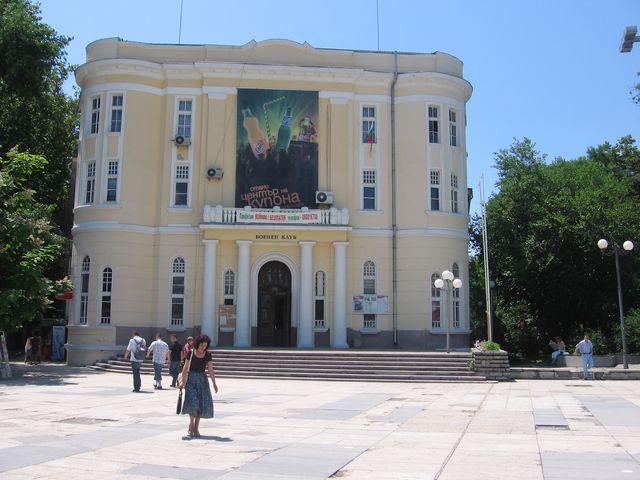 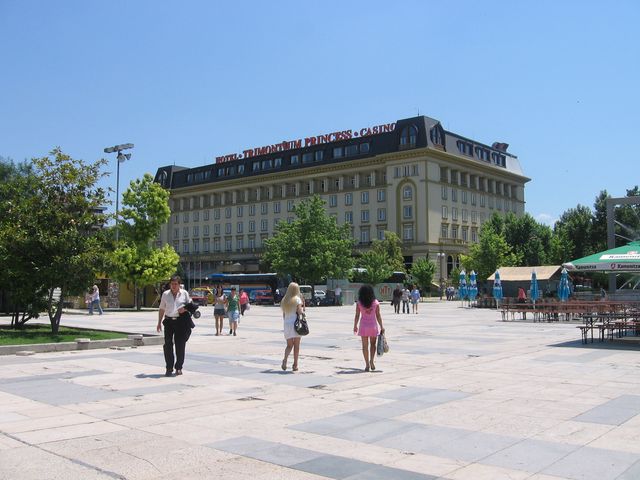 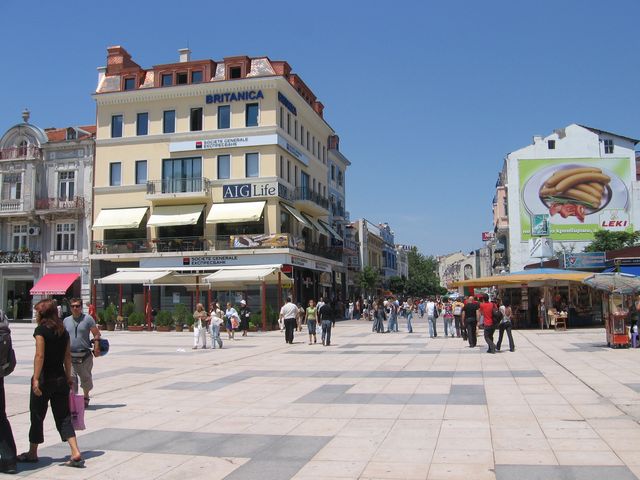 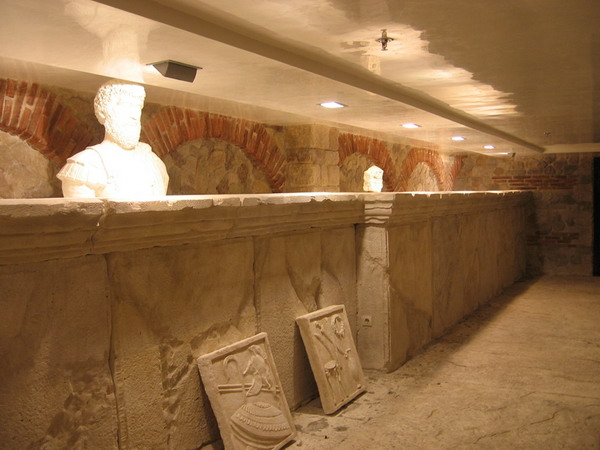 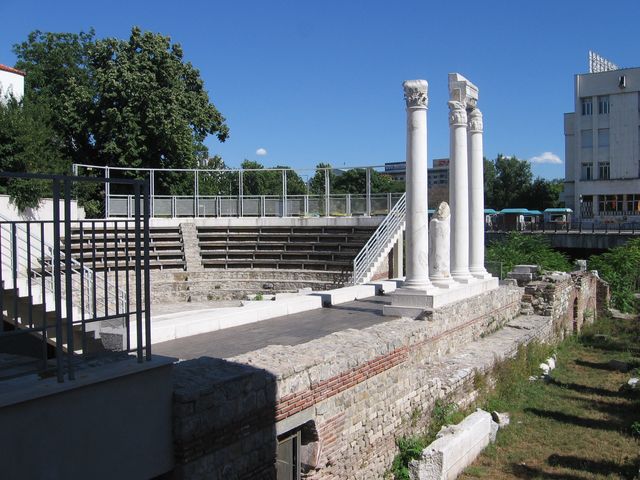 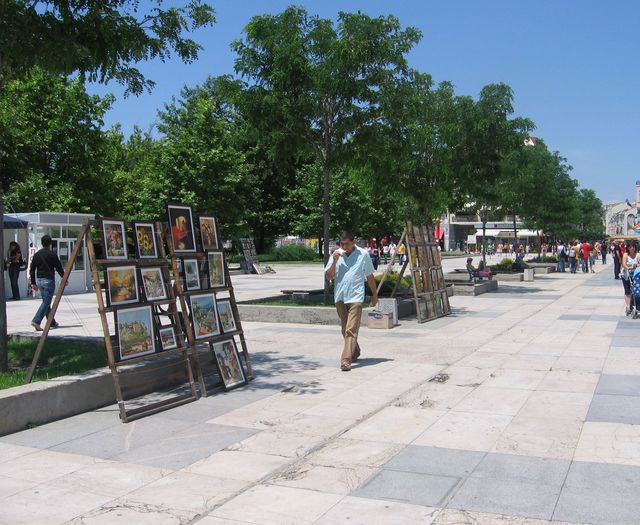 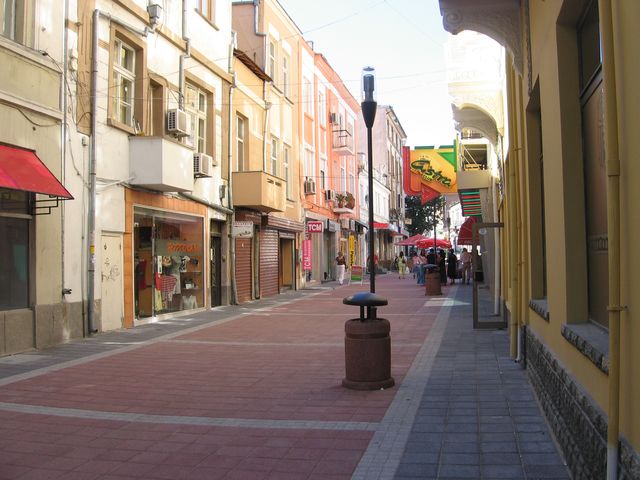 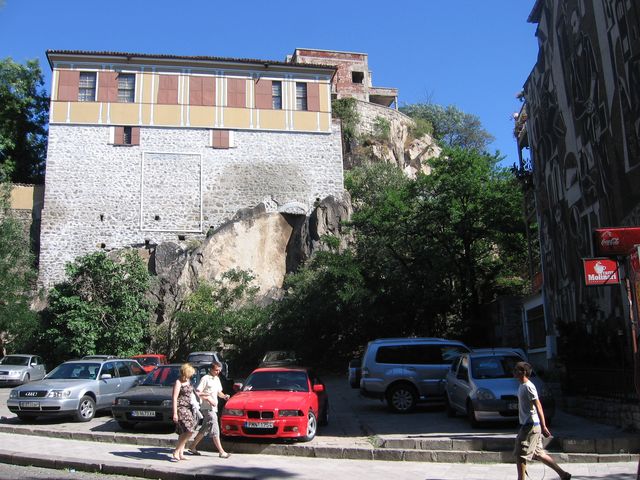 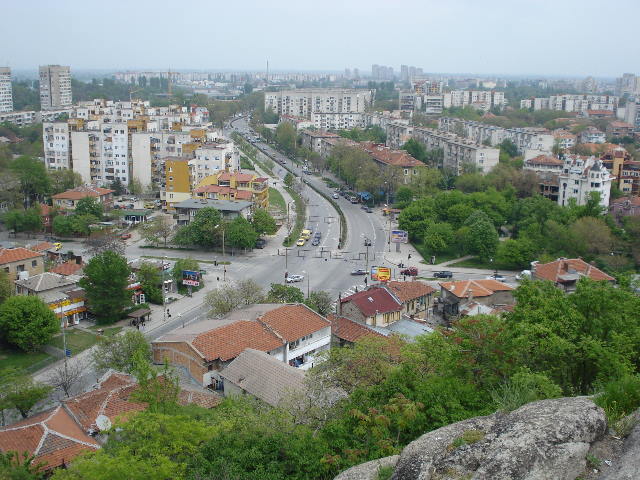 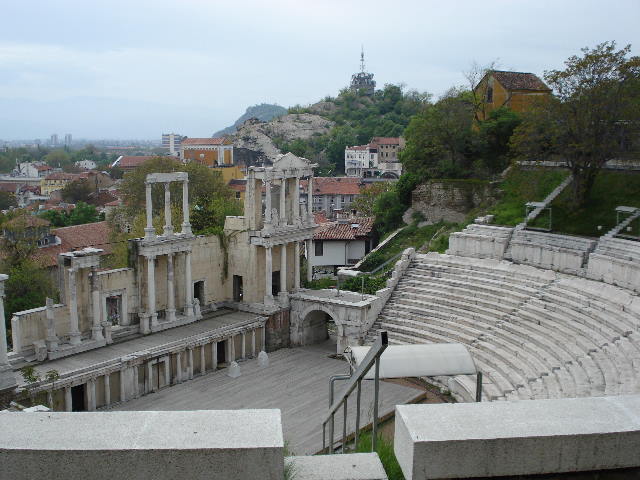 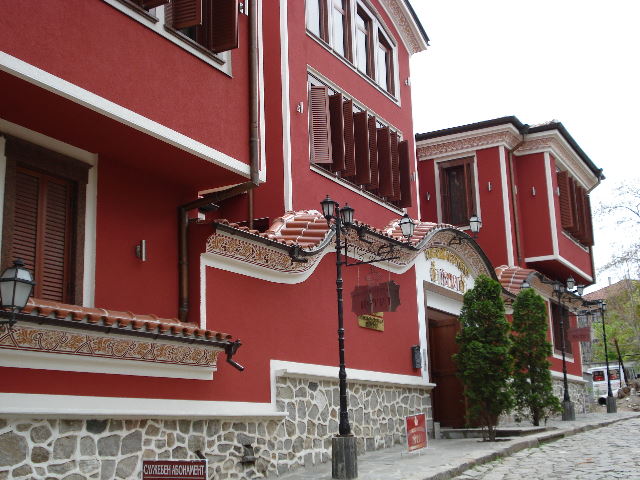 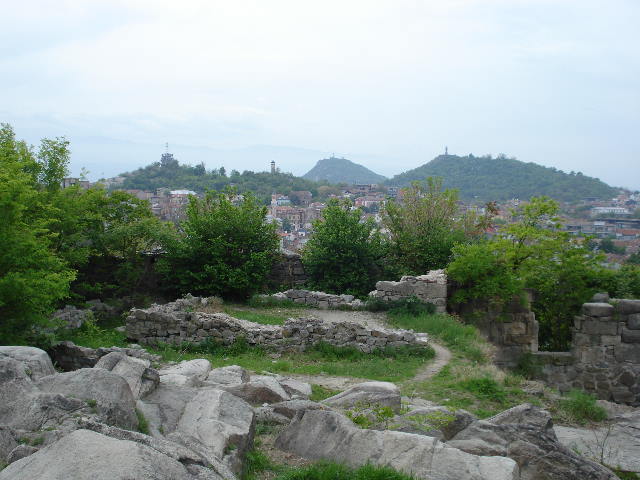 While in Roman time the city was known under the names Trimontium, Ulpia, Flavia and Julia, the Slavs adopted the Thracian name Pulpudeva but modified it to Puldin and Ploudin, from where the present name Plovdiv came.

Atter the establishment of the First Bulgarian Kingdom Plovdiv turned out to be a border city of exceptional importance for the incessant fights between Byzantium and the young Bulgarian state.

Located on the main military route on the Balkan Peninsula - Via Militaris, during the Middle Ages Plovdiv turned to be one of the stops on the way of the crusaders of the first four crusades. In the middle of the 14th century the Turks invaded the Balkan Peninsula and made Constantinople capital of the Ottoman Empire. In 1364 they seized Plovdiv and in turn give the city a new name - Philibe.

The period of National Revival was the time of spiritual awakening. The Bulgarian middle-class grew in number, became economically stronger and began playing a key role in society. In the course of their trade relations with European countries and Russia, the people from this part of society, who were open to modern political and cultural influences, realized the enormous importance of education and science. In the first half of the 19th century, together with Istanbul; Thessaloniki and Edirne, Plovdiv became a major economic centre in the European part of Turkey.

In 1877 the Russo-Turkish War began. The Russians freed Plovdiv on January 16, 1878, The Treaty of San Stefano, signed on March 3,1878, founded the Principality of Bulgaria, which included all the lands with predominantly Bulgarian population. The cosmopolitan Plovdiv as the biggest, richest and busiest Bulgarian city, naturally, was declared capital of the new state and centre of the new Russian Temporary government.

The treaty was modified by the terms of the Treaty' of Berlin signed four months later. According to these terms Bulgaria was divided in three parts - Principality of Bulgaria with Sofia as a capital; vassal to the sultan Eastern Rumelia Province with Plovdiv as a capital; and Macedonia, which was returned outright to Turkey.

After the Union Plovdiv became and still is second in size and importance to the capital Sofia.

Plovdiv is the centre of Plovdiv Region which covers an area of 6,000 sq. km, which is 5.4 percent of the territory of Bulgaria.

The city spreads over an area of 53 sq. km in the Thracian plain along the banks of the Maritza River. The favourable climate and geographica location contributed to the development of the city throughout all historical ages.

The architectural monuments from Antiquity and early Middle Ages create the unsurpassed atmosphere of Plovdiv.
The first signs of distinct Ottoman type urban planning can be traced to the middle of the 15th century when a mosque became the centre of the new city coordinate system. The mosque was built over the foundations of a medieval church, which in turn lay upon an earlier historic layer containing the northern arch of the Ancient Stadium.

West of the shopping street on the south bank was the city administration, while to the east was the artisan's area, called Kapana (the trap).

Architecture in Plovdiv was influenced by the Secession style with its abundance of decorative elements from the beginning of the 20th century up to the thirties. The most typical buildings in this style are situated in the section starting from the Railway Station along presentday Ivan Vazov St. and the main street up to Dzumaya Square.

The Panagyurishte treasure from the end of the 4th century, 6.164 kg weight, comprises nine gold vessels with unique decoration, made Plovdiv well-known tar beyond the borders of the country.

Old Plovdiv was declared an architectural museum reserve because of the architectural features of the National Revival-style houses sited compactly on the territory of the Three Hills (Nebet Tepe, Jambaz Tepe and Taxim Tepe). Their impressive appearance, ornate internal decoration, cosiness and family spirit are perfect examples of the spirit of their time.

The old churches are an integral part of the Three Hills architectural ensemble. Most of them have preserved their appearance from mid-19th century - St. St. Constantine and Elena, St. Marina, St. Nedelya, St. Petka, the Cathedral church of the Holy Virgin (St. Bogoroditsa). There is also a Roman Catholic church ,,St. Ludwig", a Protestant church, and Armenian-Gregorian church, etc.

Two mosques have survived from the time of the Turkish invasion.

The spirit of Plovdiv gives rise to the creative power of its artists, writers and musicians. Well known in the country and abroad are cultural events like the International Chamber Music Festival which has been taking place in the Old Town for more than thirty five years; the Natio¬nal Autumn Exhibitions in the houses of the Old Town, also dating from over thirty years; the Golden Chest International Television Film Festival, organized for more than two decades together with the Bulgarian National Television; the Golden Rhyton Documentary Film Festival an over twenty-year-old initiative organized jointly with the National Film Centre; the Verdi Festival which draws the admirers of opera to the Ancient Theatre one of the most attractive places in the Old Town; the annual Easter and Christmas Musical Festivals; the International Folk Festival, which is one of the most exotic and popular cultural events at the end of the summer.

Plovdiv is the city of artists. It is no mere chance that the first art exhibition was organized here in the middle of the 19th century. Since then the name of the city has been finked with the names of artists from the National Revival period Dimttar Zograf, Zachari Zograf, Stanislav Dospevski, Ceorgi Danchov; from the period following the National Liberation - Ivan Murkvichka, Anton Mitov; the outstanding figures of contemporary Bulgarian art - Hristo Stanchev, Sirak Skitnik, David Perets, Tsanko Lavrenov, Zlatyu Boyadzhiev; the founders of the Plovdiv school of the sixties -- Yoan Leviev, Kolyo Vitkovski, Dimitar Kirov, Encho Pironkov, Hristn Stefanov. Today more than 500 artists work in the city on the hills. One of the first artists associations - the Association of the artists from South Bulgaria, was founded here in 1911. The small streets and courtyards of the Old Town create an inspiring atmosphere and provide natural exhibition sites. Over twenty private galleries are concerned with the fine arts market.

With its rich history and ancient cultural heritage, Plovdiv has become an attractive historical and cultural centre. There are over 7 000 beds in more than 50 hotels all over the region apart from the 5 000 beds offered by camping-sites, accommodation agencies and mountain guest houses.
The visitors can check in Plovdiv Novotel and Sankt Petersburg Park Hotel, as well as in the newly reconstructed Trimontium-Princess Hotel, Maritsa Hotel and Bulgaria Hotel.
In recent years more than 20 new hotels have been opened - Royal, Noviz, Metropole, Rodopes, etc.


View properties for sale in the area

Share
Properties with video
Only on our website you will find a variety of properties in Bulgaria with videos. Don't waste time, view them online - on your phone, laptop or tablet, at a convenient time and without the need for an inspection trip and personal visit. Welcome for video viewings with BULGARIAN PROPERTIES!
See More
Central Park - your New York in Sofia!
Homes for sale in one of the largest new construction developments in Sofia!

A unique gated complex recreating the style and atmosphere of New York's Central Park. Modern buildings, space, greenery and breathtaking views! A future icon of the Bulgarian capital that will bring a new standard for quality of life. Choose your home now - big choice and attractive prices!
See More
Hot properties in Bansko - the best offers are here for you!
Buy your own property in the top ski resort of Bansko! An all-year-round resort suitable for winter and summer tourism with the best prices in Europe!
See More
Follow us