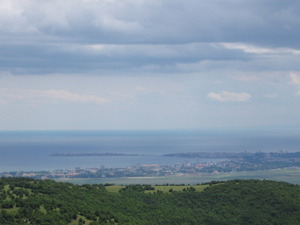 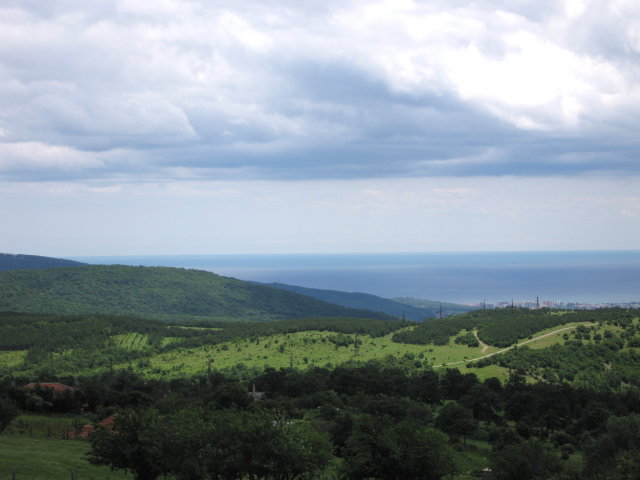 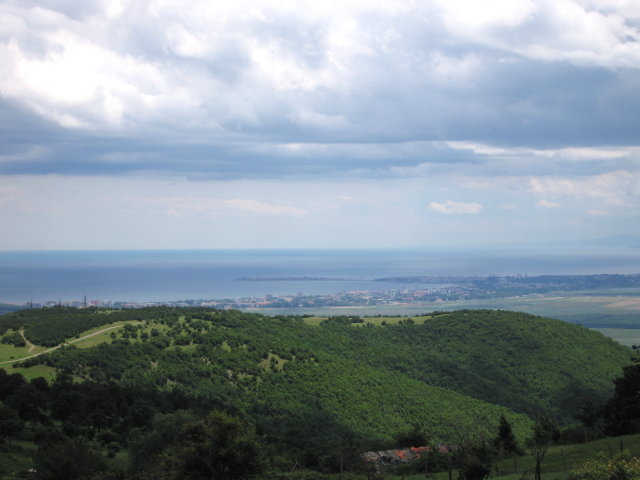 If you want to enjoy the lovely nature and be only a few kilometers away from Sunny Beach resort, choose from a holiday home in Sunset Apartments or Sunset Apartments 2. In case you are an investor, have a look at these excellent business opportunities

The Times, Article by Jenny Knight, /with excerpts/

A SMALL BULGARIAN village where goats wander the streets guided by an elderly woman dressed in black may be an unlikely place to buy a retirement home. But a growing band of British couples are doing just that.

The choice of Kosharitsa as a retirement haven has a good explanation. Most package tourists do not make it further than Sunny Beach, Bulgarias huge resort by the Black Sea. But for those looking for a permanent foothold and respite from the crowds, Kosharitsa is pretty, unspoilt and just a few kilometres inland.

Yvonne and Stephen Kent, 52 and 50, pitched up in Bulgaria in 2003, having dismissed France, Italy and Spain as retirement choices. They were too built-up and commercialised. Bulgaria was lovely, and although there are a lot more people here now we still think its great, Yvonne said.

The couple went house-hunting and last year sold their three-bedroom bungalow in Rock, Cornwall, and moved to Kosharitsa, buying a newly built two-bedroom house with three bathrooms for a mere £34,000; it has a walled garden big enough for a pool and a barbecue terrace is to be built. Yvonne added: If we had been thinking of an investment, we chose the right time to buy because the house is now probably worth three times as much, but we think of it as our home and plan to stay here rather than take the profits. We are both learning Bulgarian, which must be one of the hardest languages. We can say hello and ask simple questions.

In this village alone, there are five retired British couples who live here full time and a lot more who spend half the year here and half back in Britain. There is talk of forming an expats club, but we probably wont bother. We want to mix with the Bulgarians and become part of their community rather than stay in an English set.

The Kents decision to abandon Britain  even though they lived in what many Britons would regard as a perfect retirement spot on the Cornish coast  was driven by a liking for the Bulgarian way of life. They admire the family-centred style and the Bulgarians warmth and moral standards, but they at first found it strange adapting to cultural differences: When you hear people speaking, they sound gruff, abrupt and they do shout a lot, but then you find that its just their way and they arent really arguing. If you ask for directions they go out of their way to help and couldnt be kinder, Yvonne explains. The couple now have Bulgarian friends who help them out in emergencies: We paid our electricity bill twice by mistake and didnt have enough of the language to sort it out ourselves, Yvonne says. And because rural parts of Bulgaria have so far not been invaded by coachloads of tourists, the couple still attract quite some attention when they visit remote villages.

A big attraction for Britons is the cost of living in Bulgaria. Yvonne and Stephens monthly water bill is only £1.50 and electricity costs between £10 and £15 a month. A good bottle of wine costs £1, a beer 20p and a slap-up meal for two, even in a tourist resort, less than £10.

Groceries are also cheap  not to say free in the summer months, when Bulgarian neighbours with market gardens and orchards call to share their tomatoes, apples, pears and vegetables. All the Kents miss about Britain is bacon, friends and family. Their days are spent doing DIY  Stephen was a builder in Britain  and walking in the beautiful countryside, where a huge variety of birds can be spotted and even, occasionally, wild boar. It is also rumoured that bears still exist in remote areas.

Mike and Margaret Mellor have also retired to Kosharitsa in an attempt to stretch the small pension that Mike receives from British Steel, which he worked for as a joiner in Teesside. Rather than buy a ready-built house, they asked a Bulgarian who befriended them to put one up to their plans. Incredible though it may seem to those with less trusting natures, their faith in their new friend was amply repaid, with a fine three-storey detached four-bed house with a sun terrace on the first floor and a verandah upstairs. The deal, including central heating and a good finish  neither normally supplied as standard by Bulgarian builders  cost £60,000.

Mike said: We could have stayed in England, but we would have had to penny-pinch. Here the same pension allows us to live very well. The people are friendly and go out of their way to help. They invite you in for drinks and arrive with trays of grapes, tomatoes and red wine after the harvest. If youre not careful you can be tipsy by teatime every day. We were lucky with our builder, al though you do hear horror stories of people building half a house, taking the money and running.

Like their friends, the Kents, the Mellors are learning Bulgarian and intend to stay for the long term. Margaret says that she has already picked her burial spot. To those who predict that most Bulgarian retirees will return to Britain sadder and wiser once old age sets in, Margaret replies that they have already encountered one emergency and survived. When Mike went down with food poisoning, a consultation with a doctor was arranged quickly and easily. That and the cost of medication amounted to £3.50.

Probably a thousand or so Britons are now buying in Bulgaria each year, but most are investors and holiday-home owners rather than people planning to retire. The cost of living is very low. If Bulgaria joins the EU, prices will rise, but if locals are still earning the same wages it will remain comparatively cheap.

The village of Kosharitsa
Additional information by Bulgarian Properties Ltd.

From the village of Kosharitsa are revealed far-reaching panoramic views: to the east you can see the resort and the old town of Nessebar, to the south your sight will be captured by Pomorie Bay and reach all the way to the northern slopes of the Strandja Mountain. If you look back you will see a valley formed between the hill Biberna which is next to Kableshkovo village and the slopes of Emin Mountain. To the north there is a forest which served as protection for the people from the village during the Turkish yoke.

In the village, there is a habitat of the swamp snowdrop, covering 20 hectares, a natural reserve since 1970. A small river  Suha reka flows through the village and pours into the Black Sea.

1.5 km south of Kosharitsa on the Gyoztepe hill, there are relics of an old fortress  Kaleto. According to the legend once during the time of Khan Krum, it has been the frontier of the country. Above Gyoztepe on the main ridge of the Balkan range is the fortress Goliamata Kapia. Below the hill west of Kaleto, is the fortress Malkata Porta also known as Malkata Kapia with a fortress wall. The wall is 300 steps long in northsouthern direction. To the south, there has been a small fortress with size 90 and 60 steps. There have also been two towers.

In connection with these fortresses comes the name of the stream  Hisar  dere, that flows to the big swamp Kardis and loses in its sands.

South from Gyoztepe there has been a village which function was to guard the passages. Its residents have been doing robberies along the roads and in the Christian villages.

The archaeological material, numismatic finds and epigraphic monuments, tell us mostly about Thracian antiquity. The Thracians are the most ancient inhabitants of the Balkan Peninsula.

3 km south-west from Kosharitsa, in the land of Bialata Cheshma there is a hillock that according to the specialists opinion dates back from the Stone  Age. Here is also found an extremely rare golden idol  schematic human image dating back from the Stone Age.

North-west from the village, near Kaleto and Chibukchia, where are traces of an old fortress and a road known as Kaldarumat, accidentally in 1959 is found a collection of coins. It contains 90 coins with the name of Philip II, 10 with Alexander the Great and 2 coins from Messambria. Darina Gorova who has published the treasure announces that the coins are stamped between 336-323 b.c.

The village of Plazovetz is popular with its remnants dating back from the First Bulgarian Kingdom.

Request more information
Share
Unique residence in Old Town Nessebar
A property you can't find anywhere else in the world! OLD NESSEBAR only exists in Bulgaria and we have a unique residence for sale in this ancient city which is part of UNESCO's list of World Heritage Sites. Find your home in a place of timeless beauty which has survived through centuries and has preserved the wisdom of many cultures and civilizations. Visit this traditional-style new build residence now with a 360-degree virtual tour.
See More
Central Park - your New York in Sofia!
Homes for sale in one of the largest new construction developments in Sofia!

A unique gated complex recreating the style and atmosphere of New York's Central Park. Modern buildings, space, greenery and breathtaking views! A future icon of the Bulgarian capital that will bring a new standard for quality of life. Choose your home now - big choice and attractive prices!
See More
Beach residence with a pool and panoramic sea views in Sveti Vlas
Enjoy life in your sea residence! Buy this 4-bed holiday home with a private pool and breathtaking panoramic views of the entire bay of Nessebar! Enjoy breathtaking sunrises and romantic sunsets in your own sea house and let your dreams come true.
See More
Follow us