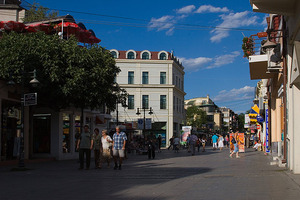 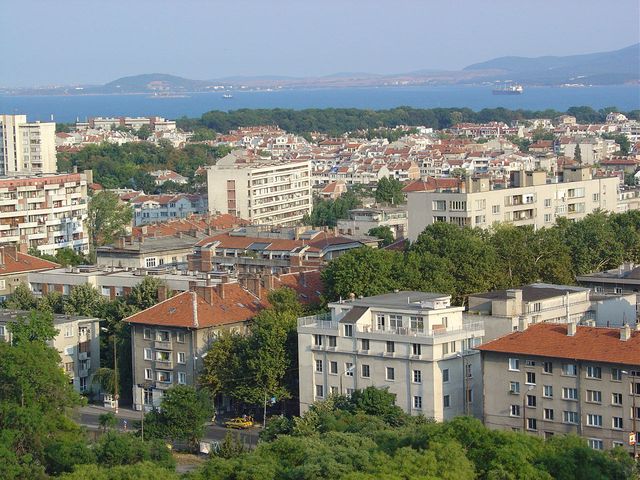 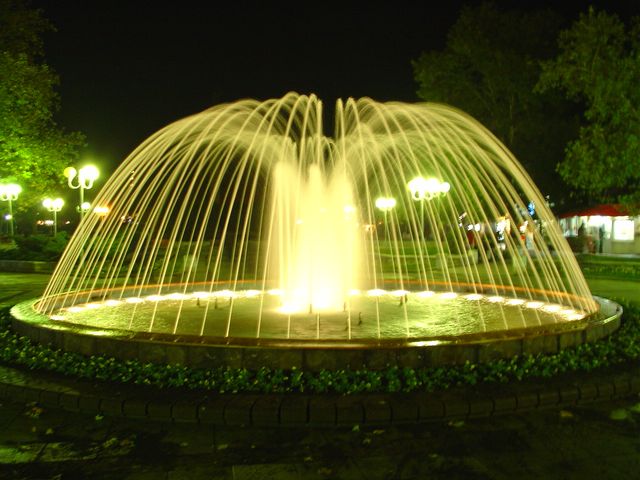 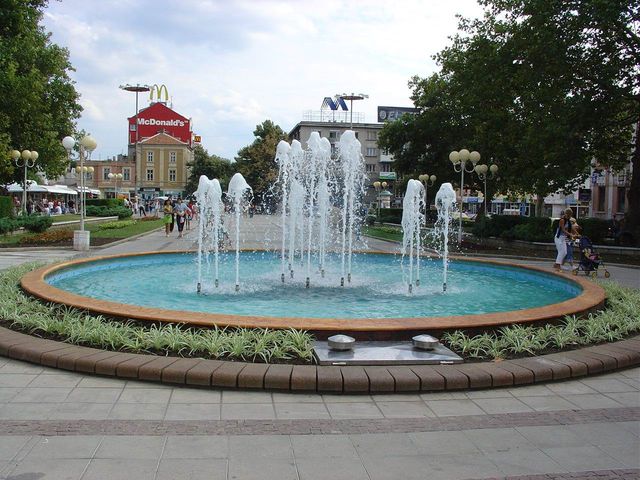 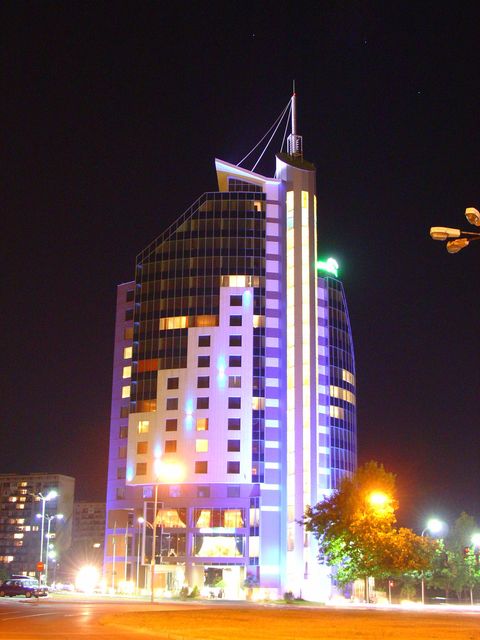 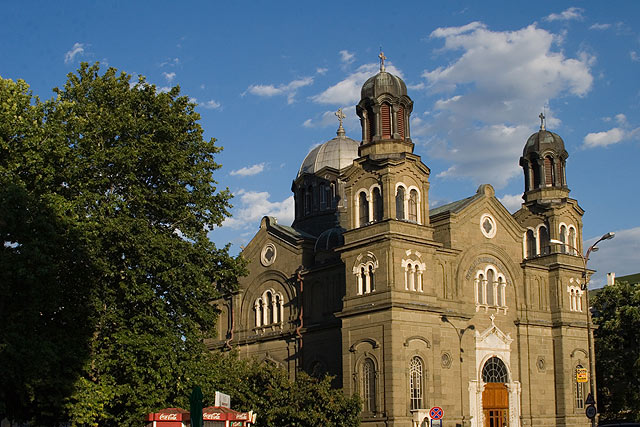 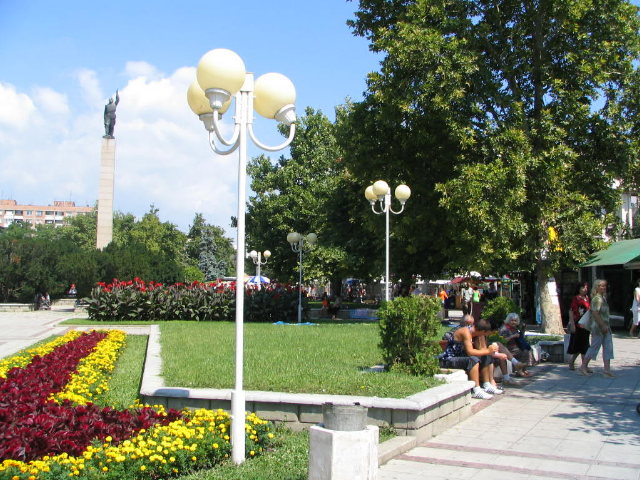 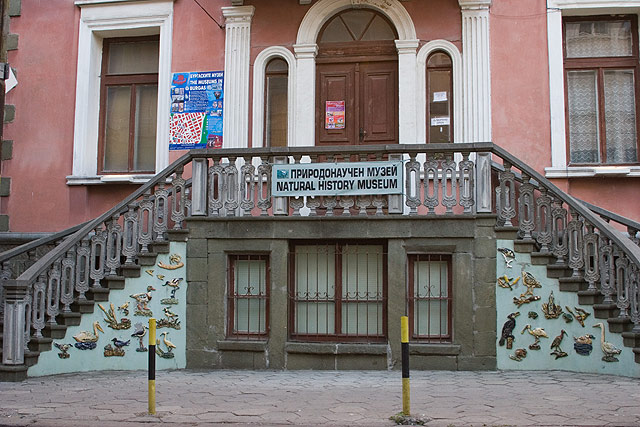 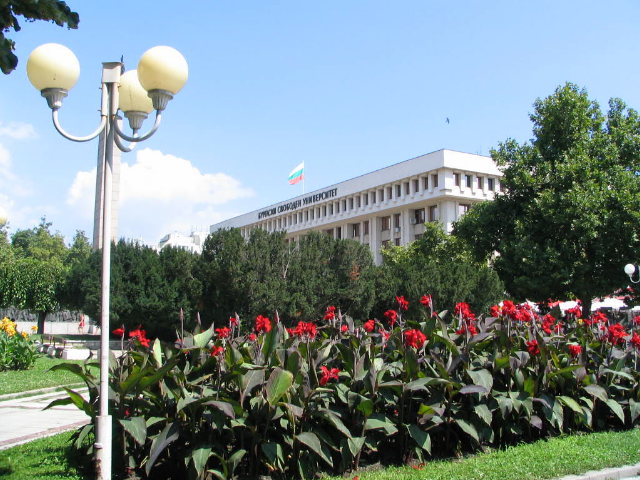 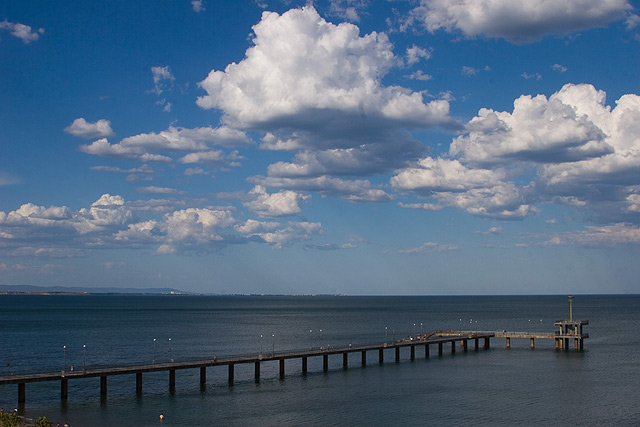 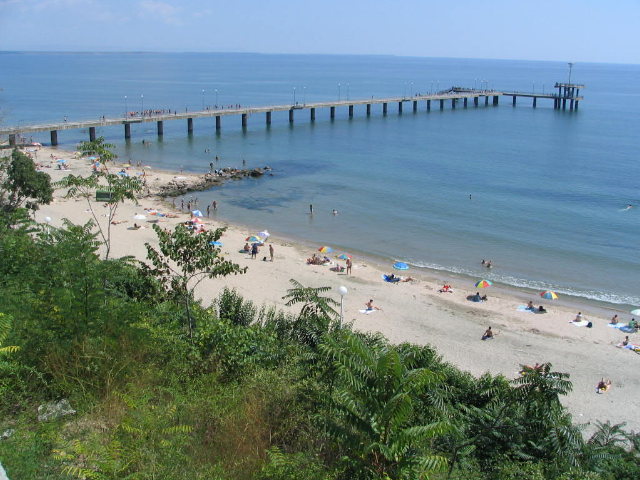 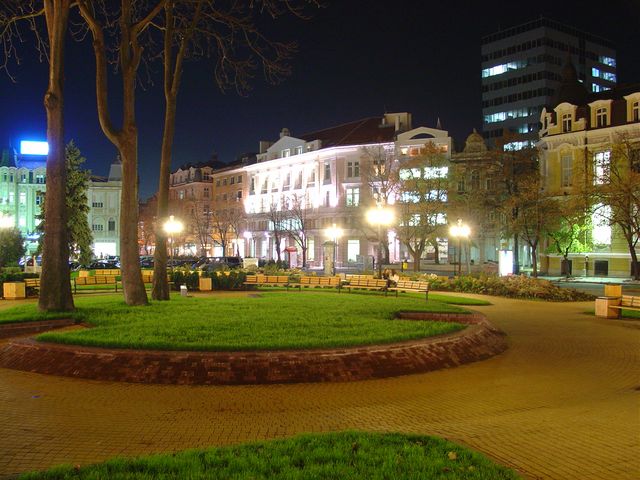 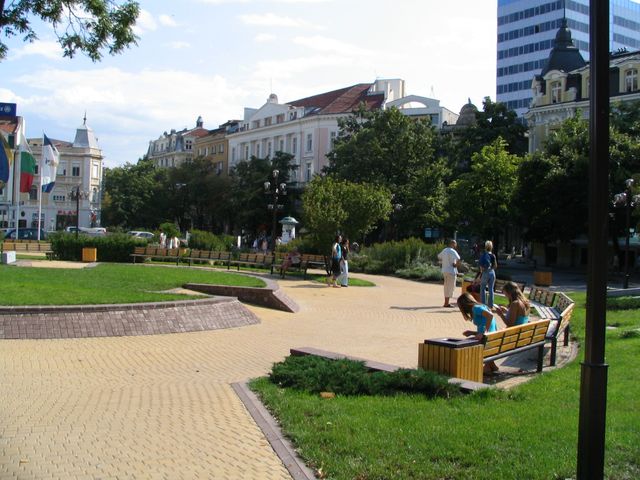 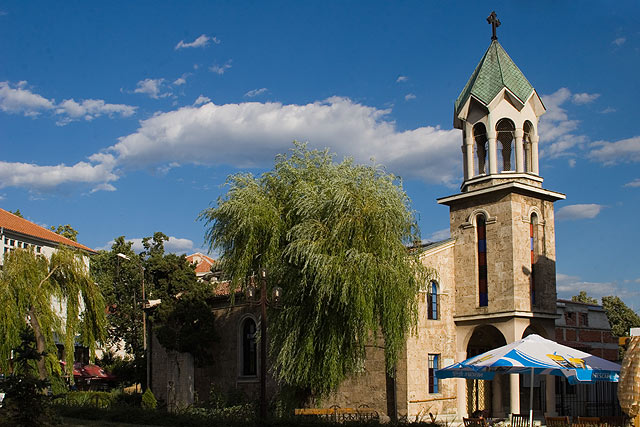 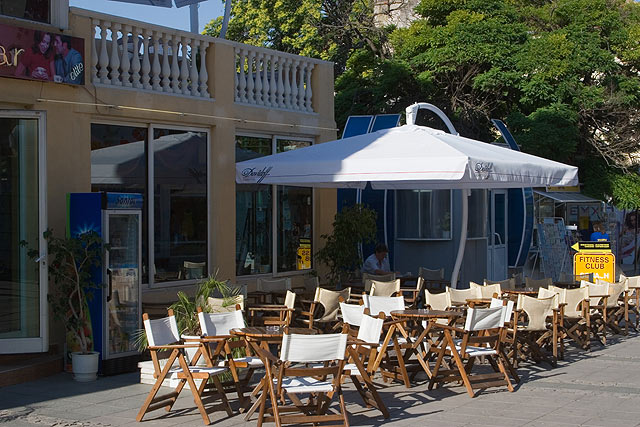 Perfect location, wide sandy beaches, long and warm summer  all these can be found in the city of Burgas, magnificently blended into one. But there is much more to the city of Burgas than meets the eye - the city of Burgas is not only a popular and much-desired holiday destination. It is a poetic and romantic city, a city of music, situated in an area rich in history, with unique flora and fauna. Nowhere else in Bulgaria will you find another city or town with more cafes, clubs, discos. All of these and the city of Burgas itself have some special ambience, because this is where the East and the West, the western standards and the spirit of the Balkans meet.

The city of Burgas itself is situated on the shores of the Black Sea and amidst a plane. Its average altitude is 17 m. To the north and south of the city there are saline water lakes, which are also bird sanctuaries due to the fact that they are in the route of the birds migrating to the south. Worth noting, however, is the fact that the summer is warm, but it never gets too hot due to the constantly blowing breeze. The average air temperature during the summer is 26.4 degrees Celsius; one of the things Burgas boasts with is the high sea water temperature: its average index is 24.8 degrees. The sunny days in the summer vary from 24 to 27 per month with 10-11 sunny hours throughout the day. The winter is mild, with temperatures rarely dropping below zero level and with almost no snow. Due to the warm air given out by the sea, the autumn is longer and warmer than in the rest of the country; the spring, however, is relatively cold and comes about a month later.

The propitious conditions and the fertile soil by the sea have been attracting settlers for tens of centuries. The earliest human settlements date back from the Bronze and the beginning of the Iron Age. The area is rich in archeological artifacts connected with the Thracian civilization and its history (IV-th century BC). The name Burgas is associated with the Latin word bourgos, which means tower. The legend has it that there used to be a Roman passenger station in the area of the present-day Burgas Port. During the 18th century AD had the biggest harbour in the area to the south of the Balkans, declining later during the last years of the ottoman rule in Bulgaria, only to become, in the 20th century, one of the most rapidly developing settlements in the country.

Nowadays, at the dawn of the 21st century Burgas is a municipal and regional centre and the fourth biggest settlement in Bulgaria, with a population of 226,000 inhabitants. As regards its economic potential, the city ranks second among the Bulgarian municipalities, with more than 15,000 companies registered on its territory and the lowest rate of unemployment. The scope of activity of industrial companies and businesses is rather wide: cables and wires, fish canning, vegetable oils, confectionary, tailoring, and many others. The airport has the best climatic conditions on the Balkan Peninsular and is the only one suitable for supersonic planes; the Burgas Duty Free Zone started operating in 1989.

Burgas has, for many years, been the renowned tourist centre of the south Black Sea coast, being a tourist destination in itself and also the starting point for visit to other world-famous Black Sea resorts, such as Sunny Beach, the holiday villages Elenite and Dyuni, and to the Nesebar, to the north of Burgas, and Sozopol to the south. Both of these are ancient towns of historical significance, having preserved traces from old Greek settlements, especially Nesebar, which has a lot of old churches, dating back from the beginning of the first millennium, as well as remains from buildings from that period. However, it is not only the sea that attracts visitors from the country and abroad. Burgas and all these resorts offer anything that a visitor might need; they have the widest range of facilities, providing all kinds of amusement and entertainment. There are restaurants and pubs with a variety of cuisines, both traditional and from abroad, discos, cafes, water slides, pools, aqua parks and many others, meant to guarantee that, apart from sunbathing, both locals and tourists will have the time of their life. The Burgas Sea Garden with its lush greenery and stretching for several kilometers along the Black Sea shore is the favourite place of all local people who like to go for a stroll and relax in it on weekends and after a hard days work.

Burgas, however, is not all about the sea: it is the starting point for the Ropotamo Reserve, which has the same name of the river itself, famous for its lilies and other one-of-a-kind vegetation, and for Nature Park Strandzha. This park is on the territory of the Strandzha Mountain, where there are many village with unique architecture, preserved in its original condition. This area is suitable for rural tourism, hiking, fishing and hunting, and some of the local inhabitants offer accommodation in their traditional-style homes. This region is situated in the southernmost parts of the country. Because of its specific geographic position over the ages, it has always played a pivotal role in bridging different ethnic groups and cultures. Only 200 kilometres away from the Ancient Straits connecting Europe and Asia, there are pieces of ancient civilizations that underlie the whole of European history. Even nowadays, where the Black Sea washes the foot of the Strandzha Mountain, there are traces of old heathen traditions present in folk rites and rituals preserved even to this day, and practiced either as a tourist attraction or as a still cherished tradition.

Burgas has more than ten art galleries, the undisputed leader among these being the City Art Gallery, with its exhibits being arranged in the former Jewish Synagogue, built at the beginning of the 20th century according to the project of an Italian architect. It has been proclaimed as a work of art and nowadays holds works of most major Bulgarian painters and sculptors. There are a number of other galleries, some of them state-owned, some of them private. They also exhibit the works of young, contemporary authors, and also sell their paintings. In the city there is a cinema and a theatre, which stages performances of both the local theatre company and of visiting companies as well.

Burgas is also known as the city of festivals. Every summer, on the stage of the summer theatre in the Sea Garden there is a festival called Burgas and the Sea, which for several years has been renowned as the festival popularizing many songs and being the threshold for the career of many talented performers. That same theatre has for many years been the stage where the International Folklore Festival has been taking place, presenting folk dances and songs of peoples from all over the world. Beer Fest, Festival of the Bulgarian rock music, and the annual theatre festival On the Shore, as well as the traditional classical music festival, named after a famous Bulgarian conductor, are all organized and held in Burgas.

The history and the variety of archeological artifacts found on the territory of present-day Burgas Municipality are exhibited in the Burgas Archeological Museum; however, the history of the region, from the Bulgarian Renaissance up until the present day can be seen in the City History Museum. In the Ethnographic Museum you can see and learn a lot about the everyday life, culture and traditions of the local community, not only from the area of Burgas itself, but also from the area stretching to the north and south and comprising many villages that are now attracting foreigners as a permanent home, most interesting of which are those situated to the south of Burgas, at the foot of and in the Strandzha Mountain. There is also a Natural Science Museum, where different species of animals can be seen.

So, to cut the long story short, no matter what you like doing  sunbathing, going shopping, visiting museums, watching performers, going for a stroll in the beautiful Sea Garden, or going to discos, restaurants and clubs  you can all find it here, in Burgas: you need not go further or search anywhere else; all you can ever ask for is right here, close at hand and waiting for you to appreciate it and enjoy yourself.


View our properties for sale and rent in/near Burgas

Share
Properties with video
Only on our website you will find a variety of properties in Bulgaria with videos. Don't waste time, view them online - on your phone, laptop or tablet, at a convenient time and without the need for an inspection trip and personal visit. Welcome for video viewings with BULGARIAN PROPERTIES!
See More
REALTONS PLACE - luxury offices for rent with a top location in Sofia!
Looking for a new comfortable office to grow your business? We have one of the best offers on the market in a preferred business area around mall Paradise Center and metro station Vitosha. Have a look at the available premises and contact the responsible consultant.
Realtons Place will be ready for the new business season in September 2022.
See More
Properties with 360-degree virtual tours
Feel the unique atmosphere of Bulgarian properties with the virtual tours we offer! At any time, with just one click, you can travel to your dream home, with no need for appointments and trips.