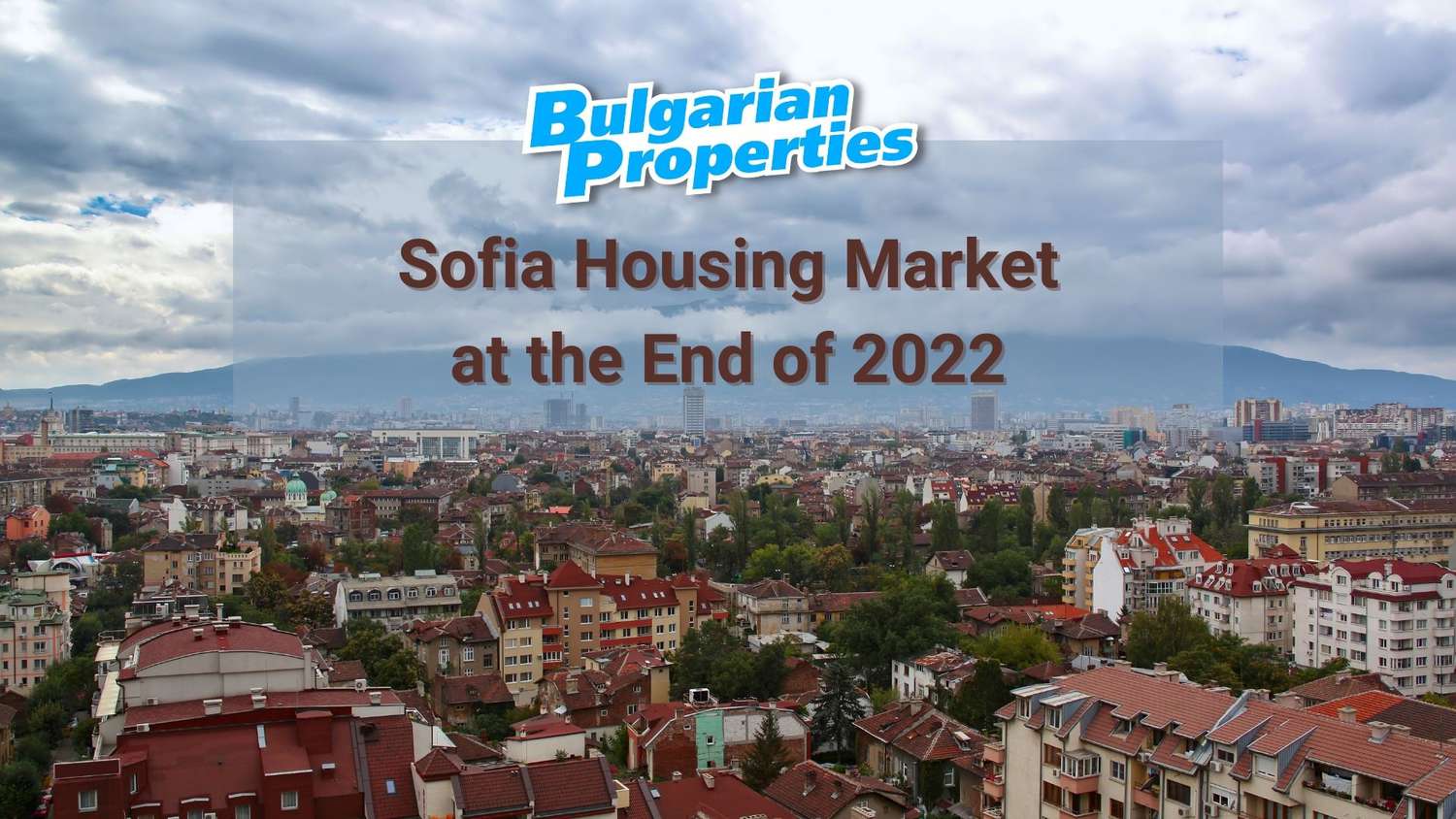 In 2022 the housing market in Bulgaria became red hot, experiencing price growths which we hadn't seen in over a decade. This is a direct consequence from the high inflation, which has caused house prices to accelerate their growth rate from 8-10% in 2021 to over 20% in 2022.

Throughout the year we have observed a steady demand but insufficient supply. Thus, a significant portion of demand still remains unsatisfied. However, high prices and increased uncertainty are already causing some buyers to withdraw from the market and wait. The results of this are fewer inquiries and a recorded decline in sales volume - indications that the market has begun to cool down.

On this background, new residential building permits have registered a record growth. In the third quarter alone, 450 permits for the construction of new buildings were issued in Sofia, which is significantly above the average levels for the city and a record since these statistics have been kept since 2005. As building permits are one of the early indicators of upcoming changes in housing market cycle, we can be optimistic about it next year - the direction is still upward.

Other factors affecting the housing market continue to be positive. Unemployment remains at low levels - around and below 5%, and incomes continue to grow, albeit more slowly than property prices - by around 16% in Sofia in the third quarter on an annual basis according to National Statistics Institute data. This keeps housing affordability at good levels and the market close to its fundamentals.

The average price of housing in Sofia in the third quarter, based on actual transactions, according to data from BULGARIAN PROPERTIES, is EUR 1,470/sq.m. compared to 1,425 Euros/sq.m. in the second quarter and 1,200 Euros/sq.m. a year earlier. 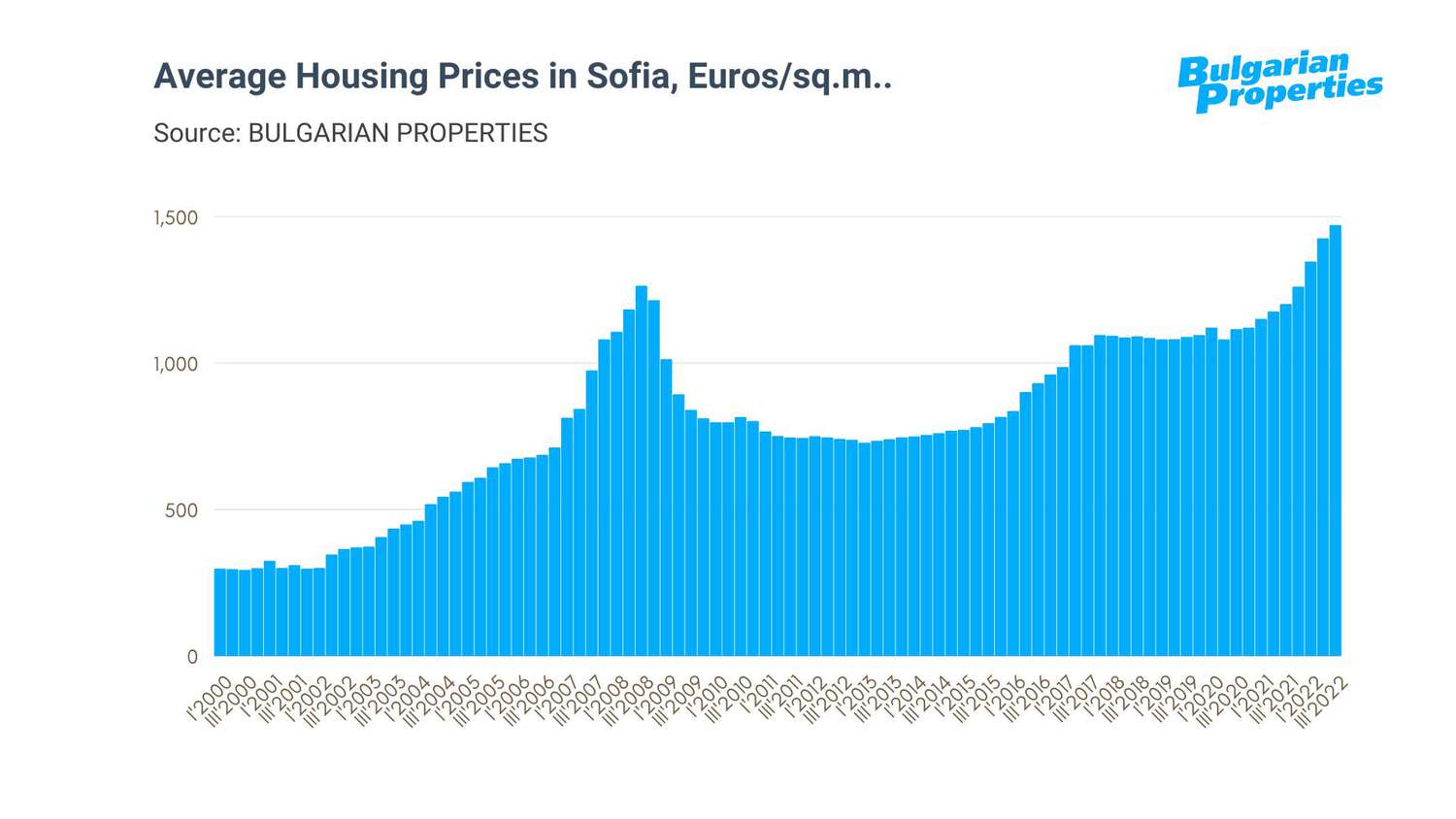 This represents a record nominal price growth in Sofia of 23% year-on-year  well above the expected levels for this year and a value not seen since 2008. In one year, the square meter in the Bulgarian capital has become more expensive by 270 Euros, but we can already see that this growth rate is slowing down. Q3 quarterly price growth was around 3%, slowing from over 11% at the start of the year and 5% in the second quarter.

At the end of 2021 prices began to accelerate their growth and from nominal growth around 8-10%, in 2022 they grew at an accelerating double-digit rate above 15%, and subsequently even above 20%.

Due to high inflation, to get an idea of ​​the real house price growth, we need to deduct it (using the Harmonized Index of Consumer Prices). The resulting real growth of housing prices in Sofia is 6.36% on an annual basis. This shows that the large increase in 2022 is mainly due to the high rate of increase in the general price level, while the actual growth is much closer to the expected market development.

At the end of 2021 the prices from the peak in 2008 were reached, and at the moment the apartments in Sofia are being sold for around 200 Euros/sq.m. above these levels.

The average total price of purchased apartments in the 3rd quarter was 115,900 Euros. We see the overall purchase budget levels has not increased a lot, indicating that a peak has been reached beyond which buyers are less willing to buy.

The calculations of BULGARIAN PROPERTIES based on the data of the Registry Agency show that property transactions in Bulgaria marked a decline in the 3rd quarter of 2022. This is the first decline since the market was halted at the start of the pandemic in the Spring of 2020. 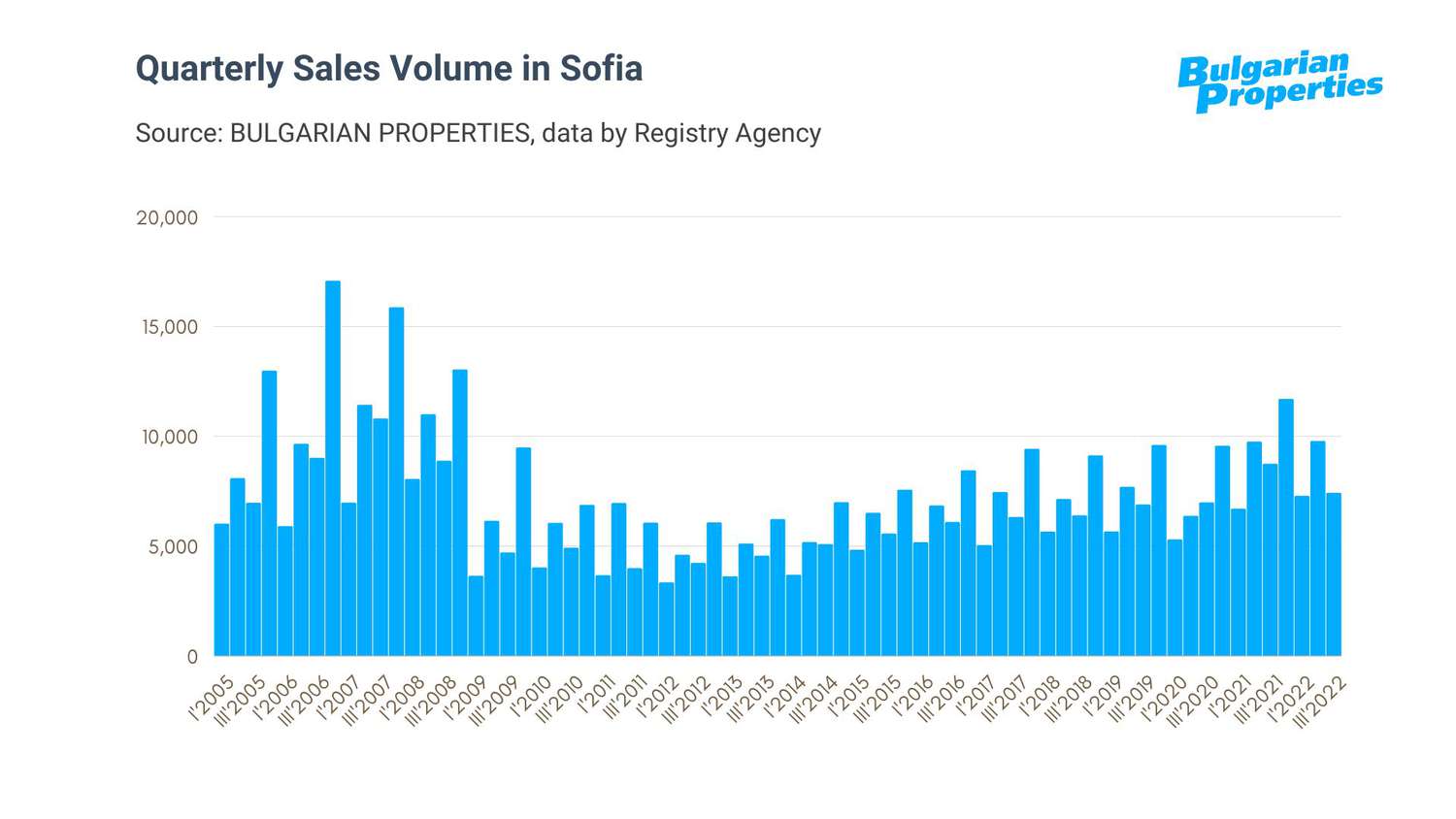 These figures come after the market slowdown we noted towards the middle of the first half of the year and interest cooling due to high prices and insufficient supply. However, it is good to keep in mind that the reduction recorded is compared to record sales volumes achieved in 2021, when transactions growth was between 20 and 30%.

We could conclude that the initiated slowdown and cooling of the market represents a return to the normal pace of market development, which was interrupted by the pandemic and subsequently greatly accelerated in 2021.

Read the full report with detailed data about mortgage lending, affordability index and most sought after areas in Sofia.

View our offers in Sofia

Sell a property with us

Get a free online valuation

Share
Central Park - your New York in Sofia!
Homes for sale in one of the largest new construction developments in Sofia!

A unique gated complex recreating the style and atmosphere of New York's Central Park. Modern buildings, space, greenery and breathtaking views! A future icon of the Bulgarian capital that will bring a new standard for quality of life. Choose your home now - big choice and attractive prices!
See More
Beach Villas on the Bulgarian Black Sea Coast
Searching for your own place in the sun?
Explore our selection of lovely houses and villas situated in the beach resorts and in the villages nearby! The best prices in Europe!
See More
Follow us 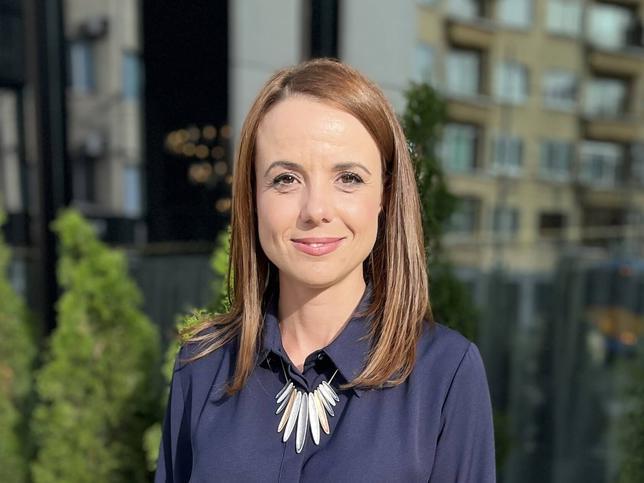 Press & Media
Polina Stoykova for Darik Business Review: There will always be bargain deals on the property market in Sofia

1,470 Euros per square meter is the average price of properties in the Bulgarian capital for the third quarter of 2022.


The annual growth is 22.5%, according to the data of one of the largest agencies operating on the market in Bulgaria - BULGARIAN PROPERTIES.

Expressed in monetary value, this represents a nearly 300 per square meter inc... 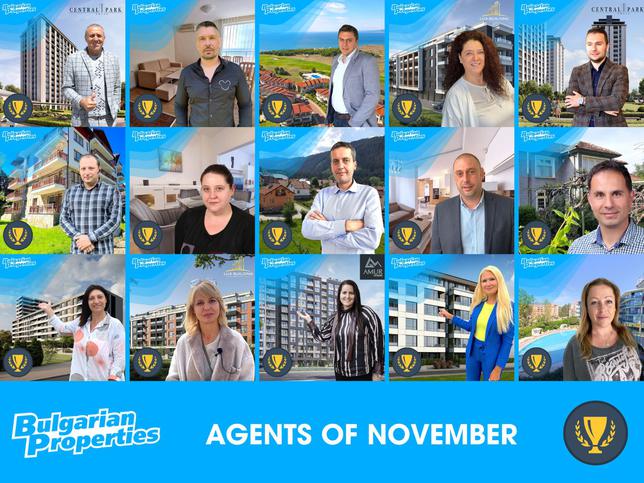 We're entering November and we can't wait to share with you the agents of the new month, as well as the current trends in the market!

The month of October continued the trend from the summer for very good activity. Deals were concluded in Sofia, Plovdiv, Varna and Burgas (where we have a strong presence both on the market of new construction and on the secondary market), as well as ... 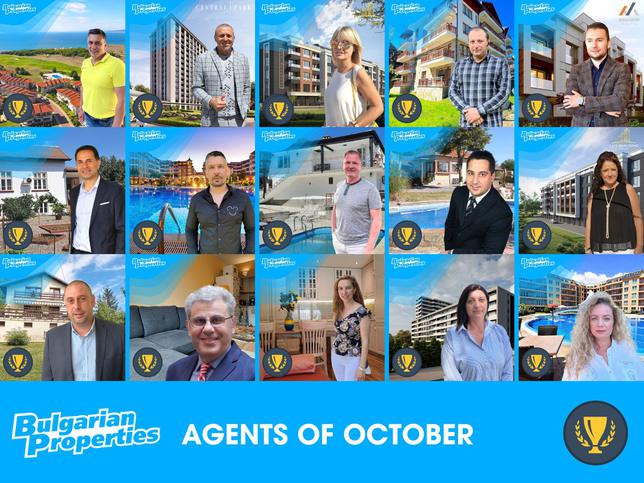 We are entering the last quarter of this extremely dynamic year. It's exactly the time of the year when the real estate market in Bulgaria is most active, both in the big cities and in the villages and resorts.
An excellent time for putting a property on the market, conducting viewings, and closing deals by the end of the year. Wish us success!

September was marked by a very... 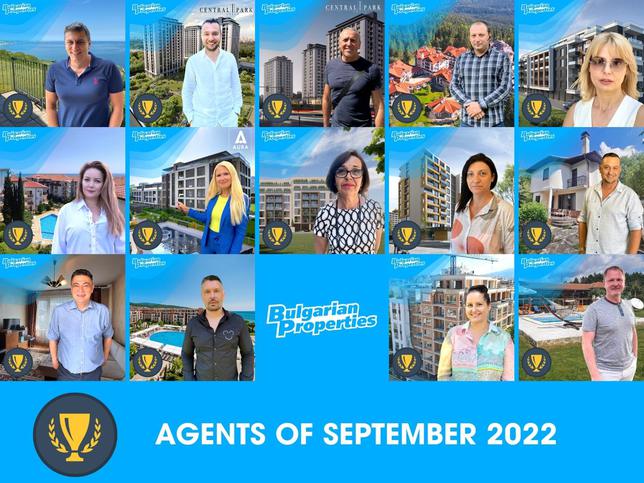 We welcome September and the last 4 months of 2022 with an active property market across Bulgaria which is seen in the results of our monthly ranking.

The summer months were very busy for us as we dedicated them to finding more and more diverse properties to meet the high demand on the market.

As a result, we can boast a strong month of August, one of the strongest...