In the first quarter of 2012 the number of sales remained similar to the same period in 2011, which is positive news on the background of an uncertain economic recovery. At present the real estate market in Bulgaria is calm, prices have reached a balance and have remained more or less the same in the last six months while property supply is high-quality and diverse. The market at the moment provides very good conditions for striking a bargain deal. More and more property sellers and buyers are managing to overcome the crisis mindset that had overtaken the market in the last few years and they are adapting to the new reality.

Highlights:
 Property prices remain similar to those in 4Q 2011
 The number of real estate deals remains close to that in 1Q 2011
 Strong interest in beach properties even during the winter
 More interest in properties in ski resorts compared to winter 2011
 Interest in quality rural houses that are ready to live in
 Bulgarians and Russians continue to be the main buyers

Generally speaking, there has been little change in the prices of apartments in Sofia since September 2011. However, there are some monthly fluctuations visible in BULGARIAN PROPERTIES index of the average monthly listing prices  the fluctuations are within +/1% on a monthly basis. 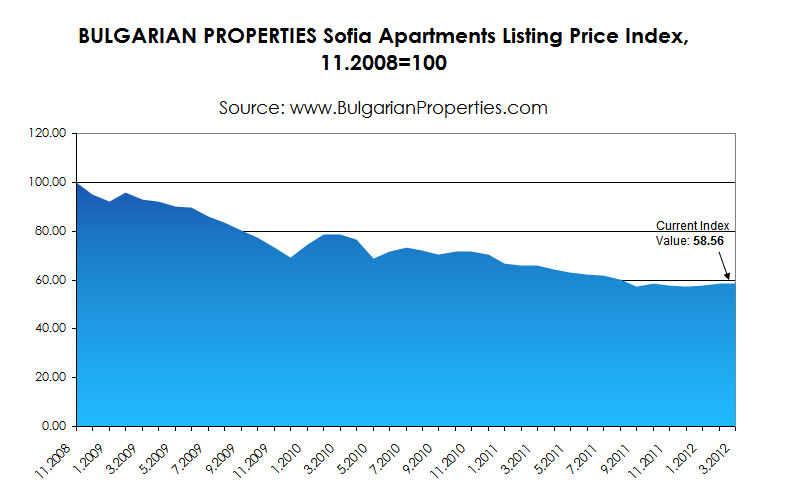 BULGARIAN PROPERTIES index of listing prices of apartments in Sofia for March is 58.56 points with a base of 100 in November 2008, i.e. the accumulated price drop is about 42% and this level has been retained in the last six months. This shows price stabilization which is visible both in the listing prices and in the prices of actual concluded deals.

In January and February the most preferred apartments were mainly in the lower price segment while in March there was also interest in more expensive apartments in prestigious quarters in the capital.

The markets in the two biggest resorts in Bulgaria  Sunny Beach and Bansko, are still similar in terms of supply and prices. However, Bansko is still not as interesting for Russian buyers, who are the main driver on the holiday home market in Bulgaria. 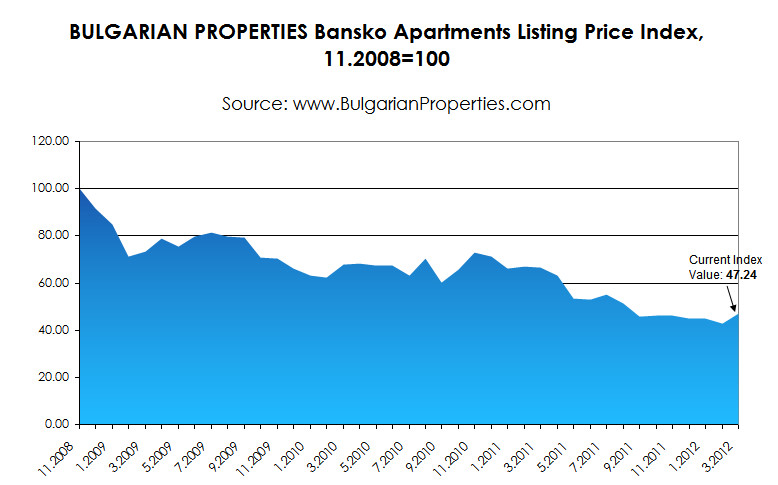 2011 was not a very successful year for holiday homes in the ski resorts in Bulgaria. Prices of properties there dropped considerably and in the beginning of 2012 we are witnessing a more dynamic market.

According to BULGARIAN PROPERTIES data the average listing price of apartments in Bansko in 1Q 2012 was 577 EUR/sq.m. while deals were concluded at an average price of 465 EUR/sq.m.

There is also more interest in property in Borovets where listing prices dropped by 18% in 2011 and at present apartment prices vary between 750 and 850 EUR/sq.m., while deals are concluded at about 650 EUR/sq.m. 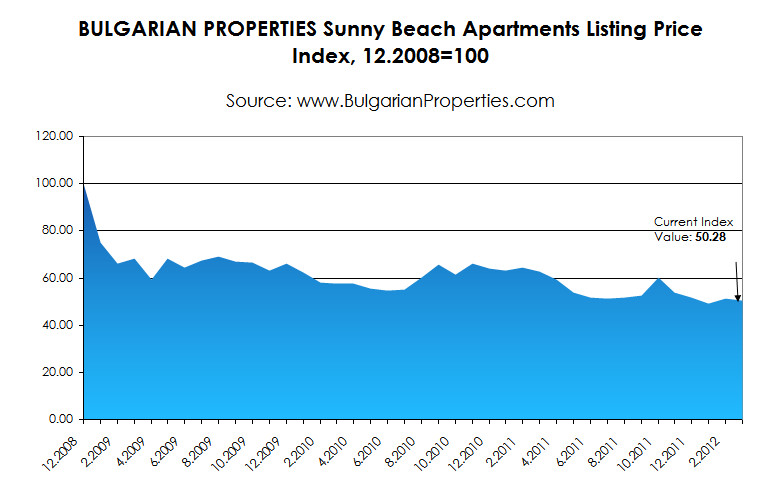 The average listing price in 1Q 2012 in the third biggest ski resort in Bulgaria  Pamporovo  was 750 EUR/sq.m. as deals were concluded at about 550 EUR/sq.m.

This year, just like in the beginning of 2011, the beach property market is more dynamic and more deals are concluded there than in the ski resorts. This is due to the strong interest of Russian buyers in the beach resorts in Bulgaria.

The average price of the rural houses sold in the first quarter of 2012 is 19,870 Euro, while for the same period last year it was 17,200 Euro. In the last three months we are witnessing fewer deals with rural houses compared to the beginning of 2011 which is mainly due to the very cold winter.

Deals are mainly concluded at prices between 10,000 and 20,000 Euro, but there is also interest in more expensive houses that are ready to live in, set close to the resorts or the bigger cities. There is most interest in rural properties in the seaside areas  the regions of Bourgas, Varna, Dobrich and in the villages in Central Bulgaria  around the towns of Veliko Tarnovo, Stara Zagora and Plovdiv. It is Russians who are the most active buyers, but there are also many Bulgarians who want to by a rural house and at present there are great bargain offers, mostly resales from foreign owners.

At the moment prices of rural homes are at their 2006 levels and the supply is more high-quality compared to previous years when the market in this segment was just starting to develop.

Average prices of rural properties sold in 1Q, as per region:

Buyers as per nationality

The main property buyers continue to be Russians and Bulgarians, as Bulgarians buy mainly property in Sofia and in the other big cities and Russians  in the beach resorts. There is also a trend of Bulgarians buying holiday homes and rural properties due to the bargain prices and good offers that come on the market.

Some of the other foreign clients of BULGARIAN PROPERTIES come from France, Denmark, Norway, Sweden, Lithuania, Israel, etc.

Share
Rural Houses in Bulgaria
A real peace of heaven in the Bulgarian countryside! Your own holiday home in a magic world hidden from the stress and noise of the urban life we are all getting tired of. Let's take off for a journey back in time!
See More
Properties in the Bulgarian Beach Resorts!
Check our selection of properties on the Bulgarian Black Sea Coast! Attractive prices starting from just 15,000 Euros for a furnished studio! Regular flights to Burgas and Varna international airports. Perfect for frequent visits, summer holidays and more.
See More
Follow us