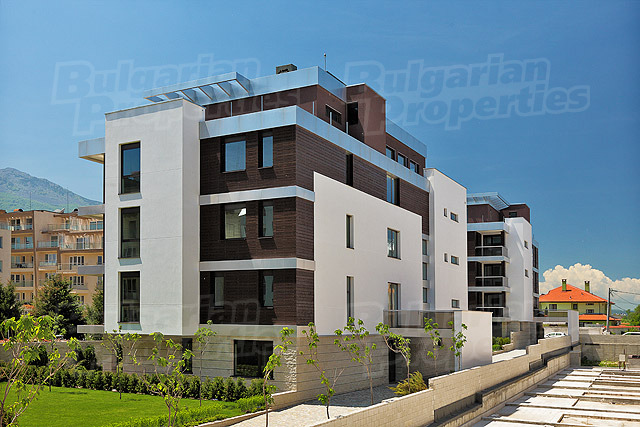 In the second quarter of 2010 the Bulgarian property market gave very diverse signals. After 6 months of a similar number of deals the month of March witnessed an increase in the deals and there was optimism that this is the beginning of the end of the crisis. The increase in the number of deals continued all through April as BULGARIAN PROPERTIES registered record sales since the beginning of the crisis. However, after that about 10% of the buyers who had signed preliminary agreements for purchasing a property decided to back out of the deal due to lack of finances and an increased insecurity about their financial situation.

May was a very slow month with a 60% drop in the number of deals around the country compared to April. In June sales returned to levels close to those from March and April but also close to June 2009 which was one of the best months for the real estate market last year.

This market situation is very different compared to each of the previous months and this makes us think that the recovery will not be as stable and as smooth as we forecasted earlier. The next few months will be of key importance for the direction in which the market will go until the end of the year. 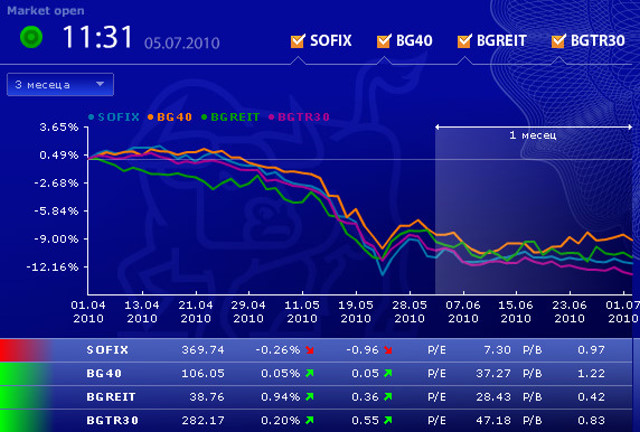 For already a year now the property market shows similar activity, it stays at one level and does not develop. The only sign of progress was when prices decreased in 2009. The first two quarters of 2010 also give different signals  decrease of the asking prices and the prices of the actual concluded deals in the first quarter and then a return to the 2009 levels of the asking prices and prices of actual concluded deals in the second quarter. This means that in terms of activity and prices the market is in the same position in which it was last year.

Our observations of the real estate market show that although it consists of less liquid assets it is extremely dynamic and reacts immediately to all economic and political trends and news. The insecurity connected to the anti-crisis measures, the tax policy, etc. had an immediate effect on the property market in May. Regarding demand of properties in Bulgaria from foreign buyers  it also fell significantly in May as a result of the news about the crisis in Greece and the threats it poses to the European economy. All this means that if the economic situation becomes worse, it would have a negative effect on the property market. 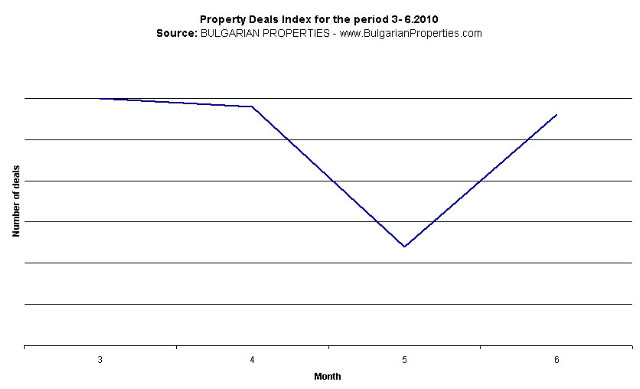 1. City properties in Sofia and Varna 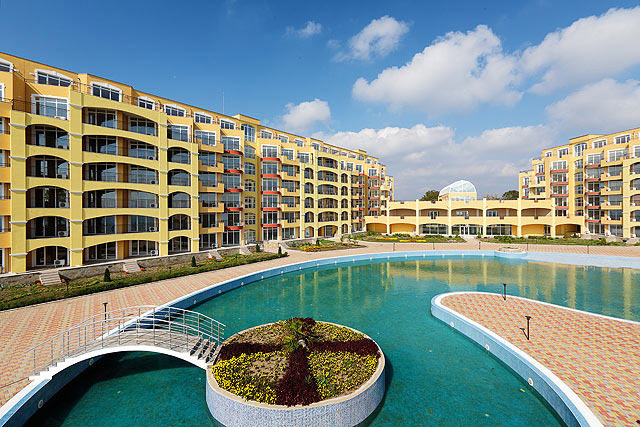 The volume of sales in Sofia remained stable in the second quarter of 2010 as well  it is similar to that from the fall of 2009.

The residential property market in Varna registered some stir at the end of last year and the beginning of 2010 but it did not reach the more dynamic market in the capital Sofia. The main part of the sales of apartments is in Varna and the neighboring resorts. This means that more holiday homes are sold at bargain prices than residential properties in the city of Varna.

The average price at which apartments in Varna are rented in the second quarter of 2010 is 420 Euro  about 10% higher compared to the first quarter which is only logical in view of the increased demand and the beginning of the summer season. The increase in the number of realized rental deals compared to the first quarter is over 100%. In the luxury segment there is also higher activity and rental deals are concluded at prices of over 1,000 Euro/month. Prices of apartments rented short-term are about 50 Euro/night.

Since March the interest of foreign buyers in Black Sea properties has been increasing as this is due to the beginning of the summer season. Quite a few of the potential clients combine their holidays to Bulgaria in spring and summer with a viewing trip and that is the reason there to be more viewings in the last couple of months.

There is also interest in luxury and elite seaside properties whose prices vary between 80,000 and 130,000 Euro. The truly luxury properties in Bulgaria (a very small percentage compared to those which are already built) will soon become a separate investment product. They will not be influenced by the general trends and market fluctuations and will make one of the best investments.

Meanwhile, foreign owners of seaside apartments continue to sell their properties as they are willing to offer bargain prices in order to make a fast deal. Since the beginning of 2010 many developers also decreased the prices of their seaside properties as there are already asking prices as low as 300 EUR/sq.m. for apartments in finished developments. Most of holiday home sellers agree to part with their properties at very low prices as almost all of them are selling under the cost price or under the price which they paid some years ago.

Almost for a year now average property prices in Bansko remain at about 650 EUR/sq.m. (with average levels before the crisis of 1,300-1,500 EUR/sq.m.). After the significant price drop last year prices of Bansko properties remain stable.

The lowest prices in Bansko start from about 500 EUR/sq.m. for finished unfurnished apartments. In the last year the average budget for an apartment has been between 30,000 and 50,000 Euro. In the last 3 months the interest in Bansko gradually decreases and focuses on the seaside resorts, which is part of a typical cycle for this type of properties.

Our main piece of advice when choosing a holiday home is for buyers to choose the development carefully  it must be finished, with a good location and excellent quality, it must be ran by a renowned property management company and must be rented out to tourists; there must also be additional extras for the tourists like a pool, a SPA center, a tennis court, etc.

In the regions of Varna and Dobrich rural house prices have not changed, like in most regions. However, prices of rural properties in the region of Vidin continue to fall compared to 2009; rural properties around the city of Bourgas are sold mainly in the area of the town of Karnobat, as they are cheaper - the average price being 9,000 Euro.

In the last 2 months the share of Bulgarian rural property buyers has increased by about 10%.

Average prices* of rural properties sold in the second quarter of 2010 as per region and percent change compared to average price levels in 2009:

* The average prices for 2009 and 2010 are formed based on actual concluded deals with BULGARIAN PROPERTIES clients.

Average price of the concluded deals with rural properties for the second quarter of 2010: 14,600 Euro with average price in the first quarter - 9 640 Euro

Average price of the concluded deals with rural properties for first half of 2010: 11,400 Euro

Accumulated decrease of average prices of rural properties in the first half of 2010 compared to 2009: -20%

2. Fluctuation of average prices of rural properties through the years:

The decrease in asking prices is already slowing down. In the last 3 months there are discounts only for properties which were sold at higher prices. There are newly discounted properties, but the discounts are lower.

Meanwhile, based on actual concluded deals, prices in Sofia have fallen by 16% in the second quarter compared to the first. This means there might be a new discrepancy between asking prices and those on which deals are concluded, especially if the market heads for a second fall.

Bulgarian clients still make up 20% of all BULGARIAN PROPERTIES clients, like in the first quarter of the year. They mainly buy apartments in Sofia, Bourgas, and Varna but also in Bansko, along the seaside and rural houses at bargain prices around the country.

Russians are the second biggest group of buyers of properties in Bulgaria (20%) as they buy mainly holiday homes at bargain prices.

British buyers are less than the Russians  15%, as they buy mainly rural properties.

April and May witnessed a comeback of Greek buyers  about 5% from all foreign buyers for those months but in June they disappeared from the market.

We continue to attract buyers from various countries  USA, Canada, Australia, China, Japan, Spain, Finland, Belgium, Norway, Germany, etc. This indicates that Bulgaria is on the foreign investment map and if investment perspectives here are good there will be interest in the future as well. This shows that the Bulgarian market is not a closed market but depends on a number of external factors and is part of the global property market.


Share
Vitosha View - an exclusive residential development in Sofia
Vitosha View is a gated complex at the foothills of Vitosha Mountain. It offers urban environment combined with the home atmosphere and the greenery of a beautiful garden. Vitosha View enjoys an attractive location and is perfect for investment in the Bulgarian capital.
See More
Belle Epoque Beach Residence
French style beachfront residence in the popular beach resort of Lozenets on the Southern Black Sea coast. The complex is completely finished and fully operational. Check out the last available apartments for sale.
See More
Follow us