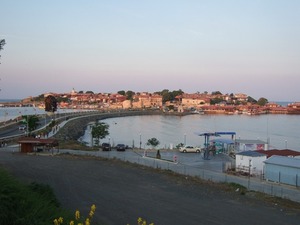 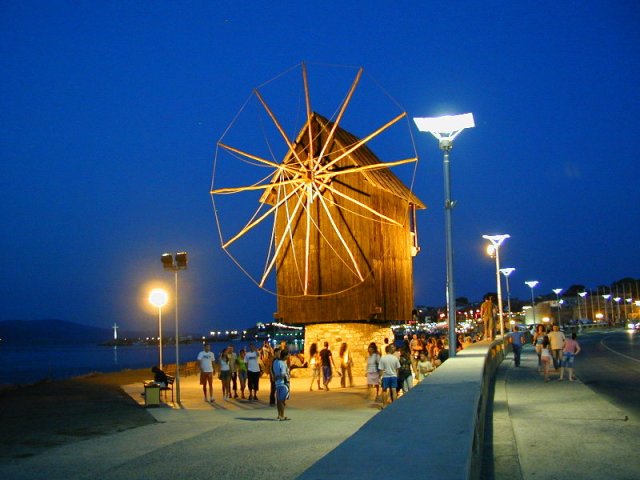 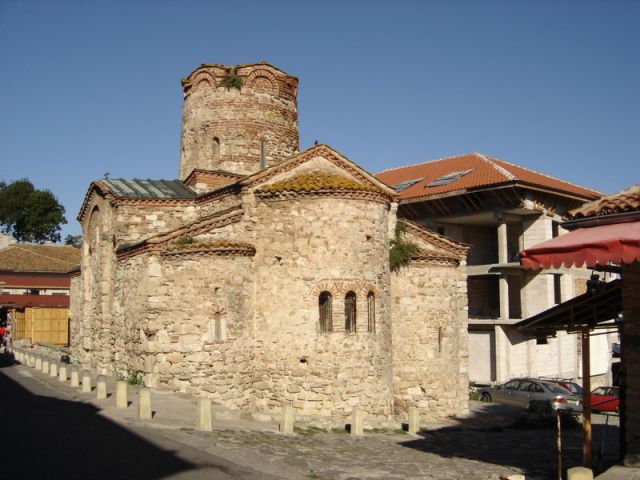 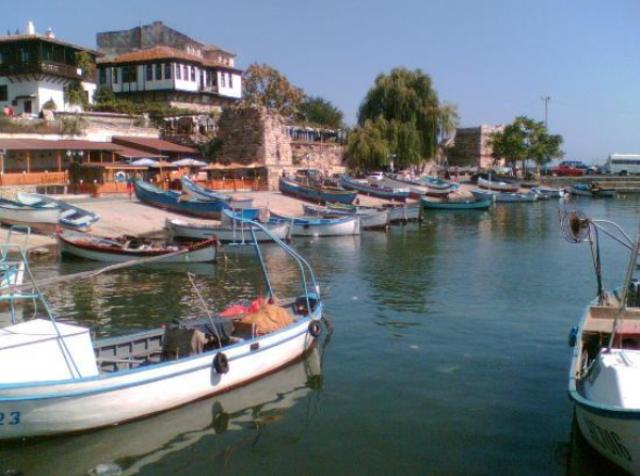 The town of Nessebar (about 10 000 inhabitants) is situated on a small peninsula 36 km to the northeast of Burgas and 430 km to the east of Sofia. Its beach is regarded to be the best along the Black Sea coast. Astonishing dunes make the coast quite picturesque. The green coppices by the sandy strips provide a cool breath of air during the hot days.

The town originates from the time when Thracian fishermen made a settlement that was named Menabryia, which meant the town of Mena (the founder of the settlement).

In the 6th century BC it was a colony of the Megarus tribe from ancient Greece, immigrants from Byzantium and Kalhedon. The Greeks named it Messembria and transformed it into a big and well-fortified town-state with natural protection both from the sea and the land. It was unique with its water mains, a system of sewers, fortified walls, amphitheater and numerous cult buildings the most famous of which was the temple of Apollo. It became a commercial center and loads of goods from the Aegean and the Mediterranean regions were carried there for commerce. The excavated objects prove that there was a brisk trade with the ancient world.

The town maintained excellent relations with the neighboring Thracian tribes and minted its first own coins in 5th century BC. Two centuries later, it enlarged so much that it founded its own colony called Navlohos near Obzor. The whole space between Nessebar and Obzor used to be a granary that supplied the two colonies with nutrition as well as goods for export and import. In 1st century BC the town fell under Roman yoke and surrendered to Marcus Lukulus' legions so that it did not suffer any destruction. At that time the constructions of the second colony of Messembria began, to the south of it - Anhialo (today the town of Pomorie).

In the early Middle Ages the town restored the fortress walls and until 813 it was part of the empire of Byzantium. In the same year, it was invaded by Khan Kroum, put up with no resistance, and was included in the territory of Bulgaria. During a long period of time the town was under the rule of the Bulgarians and then in the hands of the Byzantines. During the reign of Ivan Alexander the town reached its economic and cultural boom, and it occupied a huge territory of land not only on the peninsula. Approximately then most of the churches of Nessebar were built and up to this day they create the unique atmosphere of the town.

The churches in Nessebar are 40. Not all of them have coped to preserve their full glory but even this way they are impressive. One of the oldest buildings is the Basilica situated on the seashore, dating most probably to the beginning of 5th century. Baptist Church was built in 11th century and is a typical cross-domed church with three naves and four brick-laid columns supporting the whole dome. A small archaeological museum has been arranged in the church. The Old Bishop's Residence located in the center of the town is probably the most the imposing of all the churches in Nessebar. It is more than 26 m long and 21 m wide. The St. Stefan Church or the so-called New Bishop's Residence was built in 10th century. The facade of the church is ornamented with built-in meanders of glazed ceramic figures of varying colors and enameled tiles. The bishop's throne and the altar were made of wood later in 17th century. The subsequent picturesque style was best illustrated in the St. Todor Church but unfortunately only two facades have been preserved in their initial style. The St. St. Archangels Mihail and Gavrail Church used to have a dome; its remains speak for an interesting project and brilliant performance. The restoration gives the tourists the opportunity to encounter the architectural concept in the typical picturesque style. The St. Paraskeva Church is of the same type. It is a small one-nave church. The ornaments match the architectonics of the building very naturally. The St. Yoan Aliturgetos Church is said to be the most amazing one perched high above the harbor. In the ideal center of the town itself is the Pantocrator Church with domes on a rectangular foundation.

The remains of many parts of fortress walls have been found as well as the square turret, the round turret, a large part of the authentic medieval street pavement, and some of the Roman and Greek pavements, fortifications of different periods and epochs, remains of administrative and other kinds of constructions.

There is a regular transport connecting Burgas and Pomorie to Nessebar and Slunchev Bryag (Sunny Beach). There are private taxis typical for the seaside towns due to the large number of tourists. The prices are moderate. There is water transport to Burgas; one can often hire local boatmen to reach different places in the bay.

The most preferred hotels in the town are Messembria Hotel, Globus Hotel and Burgas Hotel. There is a tourist house and lots of small hotels. Private lodgings are obtainable without previous reservation in the old town.

The village of Ravda is situated to the south of Nessebar and a sand strip connects both of them. There are melon fields, vines and gardens near the village where one can buy fresh agricultural products at low prices. There are numerous children's and youth camps, holiday houses and private lodgings. The village of Aheloy is situated on the highway to Burgas near the mouth of the Aheloy River. This is where the Bulgarian Tsar Simeon I destroyed the armies of the Byzantine emperor Lion Foka in the area called nowadays Kokalos because of the scattered bones (kokal, from greek - bone) of the murdered soldiers.

Book a holiday or reserve a room in Nessebar

Share
Euphoria Club Hotel & Resort - your paradise in Borovets!
Fully furnished studios, 1- or 2- bedroom apartments in a unique complex in Borovets. All-year-round complex with all needed facilities for your comfortable stay - lobby bar, reception, bar and restaurant, outdoor and indoor pool, SPA center, underground parking and many more. Choose your holiday home here! No buyer's commission! Suitable for rental income.
See More
Properties with 360-degree virtual tours
Feel the unique atmosphere of Bulgarian properties with the virtual tours we offer! At any time, with just one click, you can travel to your dream home, with no need for appointments and trips.

The virtual tours are taken personally by our team and are with guaranteed authenticity. We show you every detail of the property, just like being live in there!
See More
Beach Villas on the Bulgarian Black Sea Coast
Searching for your own place in the sun?
Explore our selection of lovely houses and villas situated in the beach resorts and in the villages nearby! Prices with no competition in Europe!
See More
Follow us