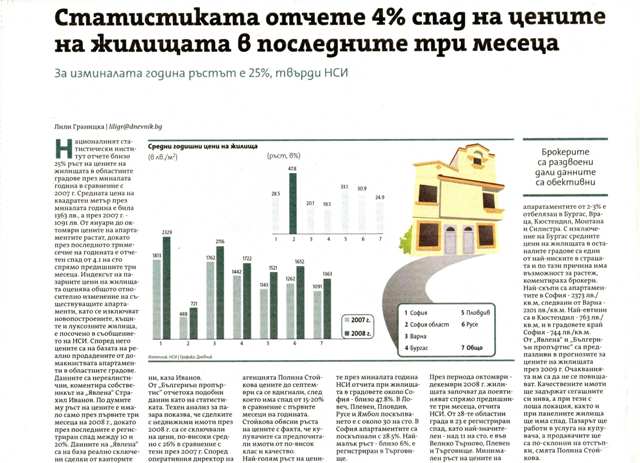 Home prices in Bulgarias regional cities jumped almost 25% in 2008 compared to 2007 to an average of BGN 1,363 per square metre, showed data of the National Statistical Institute quoted by Bulgarian daily Dnevnik.

The uptrend held through October, but prices dropped 4.1% in the third quarter from the previous three months.

The data excludes newbuilt, houses and luxury apartments and are based on the prices of sold properties.

A survey of Bulgarian Properties revealed that last year property transactions were struck at 26% higher prices on average than in the previous year. The companys operating manager, Polina Stoikova, explained prices were rising by October and then slid 15-20% from the early months of the year as buyers opted for higher-class properties.

In the third quarter prices dropped in 28 out of the 23 regional cities, most notably in Veliko Tarnovo, Pleven and Targovishte, which saw falls of more than 11%.