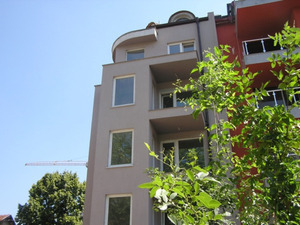 New construction in Sofia continues to decrease and started buildings have less apartments, housing statistics reports quarter after quarter. Recently built brick mastodons are replaced by small buildings with one or two entrances and 10-15 apartments.

The reasons are different  there are no buyers, entrepreneurs do not want to risk and at present banks do not tend to finance large projects. However, the direction is one - increasingly limited supply of new homes. And this after years of boom of Soviet-type blocks and brick buildings is quite normal.

Indeed, it was confirmed by the register of building permits published on the website of Sofia Municipality' Architecture and Urban Planning department  large projects are disappearing from the market.

The trend is also confirmed by the data of the National Statistics Institute (NSI) for issued building permits. Since 2009 not only less buildings have been built, but they are also smaller and with a limited number of apartments in them. "Investors are waiting. Change happens depending on demand and these things are normal in time," said the NSI expert Stanka Dimitrova.

The major reason for the decreasing construction volumes is also more difficult receiving of funding. The rising interest rates of bank loans and difficult sales forced many developers to rely mainly on their own resources. Even those who take out a loan try to provide at least a half of the capital. All this radically changed the model of construction and housing sales.

"Years ago, the construction of large buildings and complexes was launched easily, it was enough to have a suitable terrain. The apartments were sold off-plan and the construction projects were financed by the so received money. So the large scale was not a problem, on the contrary  the developers were looking for maximum built-up area from the plots in order to sell more apartments, said the Chief Operations Manager of real estate agency BULGARIAN PROPERTIES Polina Stoykova.

According to her large projects are doing well when the housing needs have to be met quickly. Such was the Soviet-type construction in major cities during the socialism as well as during the boom on the real estate market after 2003. But now the situation is the opposite  demand is weak, there are no off-plan sales and now small projects are in demand. For developers they provide faster completion of the construction, the sales and the result of the investment.


Share
Come for video viewings of properties in Bulgaria!
Only on our website you will find thousands of properties situated all around Bulgaria for which we have shot videos. Don't waste time, view them online - on your phone, laptop or tablet, at a convenient time and without the need for an inspection trip and personal visit. Welcome for video viewings with BULGARIAN PROPERTIES!
See More
Properties in the Bulgarian Beach Resorts!
Check our selection of properties on the Bulgarian Black Sea Coast! Attractive prices starting from just 15,000 Euros for a furnished studio! Regular flights to Burgas and Varna international airports. Perfect for frequent visits, summer holidays and more.
See More
Follow us