The first months of 2014 were successful for the property sales in the Bulgarian ski resorts, but in spite of the increased deals, the prices continue to be under pressure.

The seaside properties enjoy a stable interest coming traditionally from the Russian buyers. We have also noticed an increased interest from buyers coming from various other countries. The rural property market has shrunk and is now concentrated near the sea and the large cities. These are the general trends on the market of holiday and rural properties in the first quarter of 2014.

The last winter season was the strongest for the property sales in Bulgarias ski resorts since the beginning of the crisis. Even with increased sales, the interest is far from the interest during the sales boom, and is not sufficient to push off the market from the bottom. That is why the ski property prices continued to creep down in the first months of 2014. 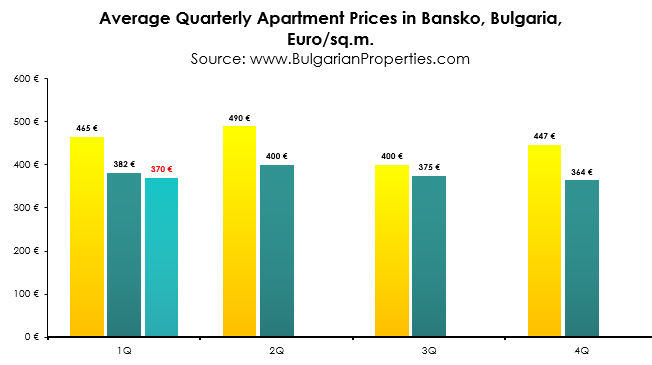 Almost 100% of the property buyers in Bansko are Russians, while Borovets is almost entirely dominated by Bulgarians. Pamporovo attracts the interest of Bulgarians and Russians, but recently there was an interest from British and other nationalities as well. Furnished studios and one-bedroom apartments are mostly on the focus there.

The average price of the sold apartments in Bansko in the first three months of the year, according to the data of BULGARIAN PROPERTIES is 370 Euro / sq.m, representing a drop of -2.6% compared to the previous quarter and a decline of -3% on an year to year basis. The buyers budgets for purchase of a ski property in Bansko continue to shrink and this year the average amount is 22 500 Euro.

The situation is similar in Pamporovo - the average price of the apartments that were sold there is 370 Euro/sq.m. 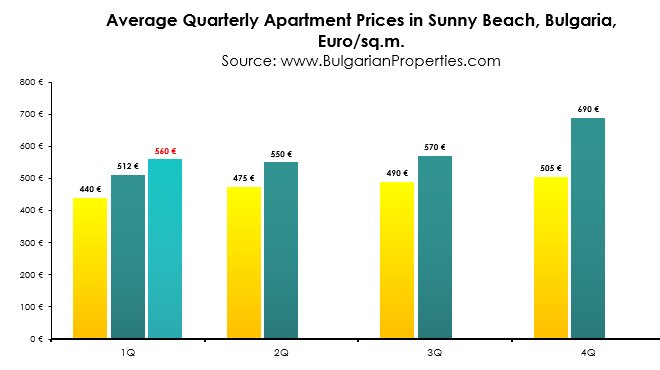 Borovets continues to be the most expensive ski resort. Deals are concluded there at an average of about 630 Euro/sq.m, and the average total price of the sold apartments is the highest one compared to other ski resorts - 37 250 Euro.

Sunny Beach and the sea

Currently 80% of the buyers at the Bulgarian seaside are Russians. Their share is decreasing slightly due to buyers of other nationalities, including Bulgarians, who now show interest in the real estate there. The largest variety of nationalities at the seaside is spotted on Bulgaria's northern Black Sea coast, and Russians are concentrated in the area of Sunny Beach, Burgas and to south - mainly in Sozopol, Lozenets, where were seen more frequent property sales in complexes of the highest class, located first line from the sea with prices between 1100 and 1500 Euros/sq.m.

As for the prices of mass-market properties, the average price in Sunny Beach for the first quarter of 2014, according to data of BULGARIAN PROPERTIES is 560 Euro/sq.m. The average total price of the sold apartments is 32 100 Euro. The budgets of buyers in this segment remain unchanged. 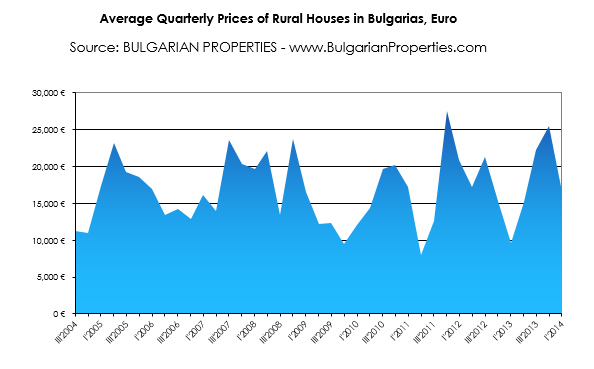 The rural property market has shrunk significantly in late 2013 and the sales decreased by half in the first quarter of 2014 compared to the same period of last year. The interest is mainly in the houses around Burgas and Varna and the houses close to major cities like Plovdiv, Stara Zagora and Veliko Tarnovo. In many regions of the country currently there is practically no market for rural homes because buyers are mainly Russians and Bulgarians and they are looking for properties around the big cities.

The average price of the sold rural properties in the first quarter of 2014 was 16 560 Euro. In the areas around Burgas and Varna, the prices often exceed 30 000 Euro, while the houses in northwestern Bulgaria near Pleven, Vratsa, Vidin, Montana are sold under 6 000 Euro.

Average prices of rural houses sold in Q1 of 2014 as per region:


Share
Beach Villas on the Bulgarian Black Sea Coast
Searching for your own place in the sun?
Explore our selection of lovely houses and villas situated in the beach resorts and in the villages nearby! Prices with no competition in Europe!
See More
Properties with 360-degree virtual tours
Feel the unique atmosphere of Bulgarian properties with the virtual tours we offer! At any time, with just one click, you can travel to your dream home, with no need for appointments and trips.