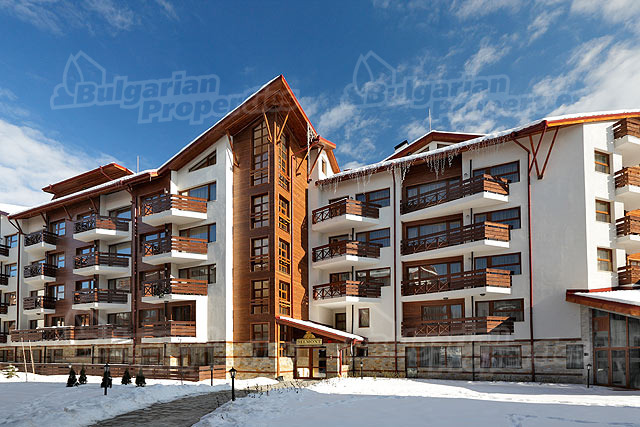 With the ending of the summer season the focus of property buyers is now turning to the ski resorts in Bulgaria. However, it is not only the upcoming winter season that increases the interest in Bulgarias winter resorts and in Bansko in particular but also the extremely attractive prices of properties there.

BULGARIAN PROPERTIES index of listing prices of apartments in Bulgarias biggest ski resort  Bansko  shows that at present prices of apartments there are 50% lower compared to their peak values in 2008. According to the data which BULGARIAN PROPERTIES announced a month ago the situation in Bulgarias largest beach resort  Sunny Beach  is similar.

With index value for Bansko of 100 in November 2008 in August 2011 it is already 51.31 which shows an almost 50% decrease in the listing prices compared to their highest value in 2008. The drop in Bansko property prices based on actually concluded deals is similar  53%. 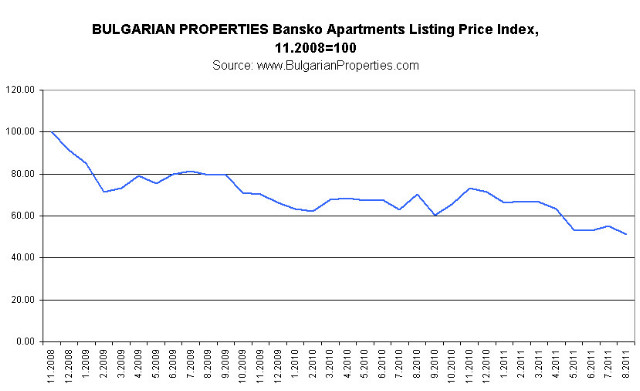 After the 2010/2011 winter season, which was not so dynamic for property deals, in May 2011 listing prices of apartments for sale in Bansko dropped by about 10% compared to the previous months. After the ending of the season listing prices of offered apartments underwent some changes which led to an increased interest in ski resorts in the summer months and to more deals than during the ski season.

In the first 8 months of 2011 apartments in Bansko were sold at an average price of 760 Euro/sq.m. or at an average of 45,500 Euro. For comparison, based on concluded deals, apartment prices in Bansko were 520 Euro/sq.m. or 31,000 Euro for an apartment. This shows that there is still a difference in the listing prices and the prices at which deals are concluded but it also shows  like with the deals with apartments in Sunny Beach  that in Bansko buyers are also mainly interested in cheaper properties. 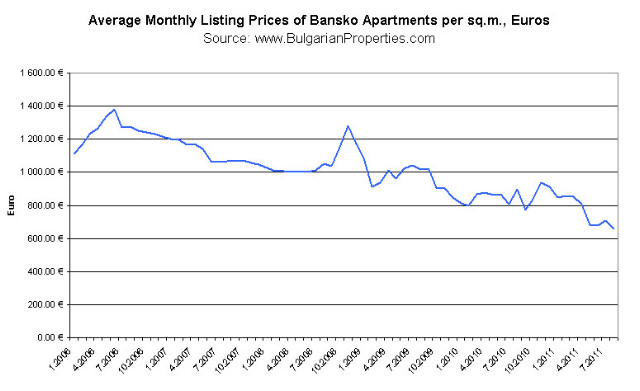 When analyzing and comparing property prices in the beach and ski resorts in Bulgaria the data shows that prices of holiday homes in Bulgarias largest winter and seaside resorts are about 50% lower compared to their value before the crisis. Although there were some differences in property prices in the ski and beach resorts in the last 3 years (prices in Sunny Beach fell faster than those in Bansko) at present prices of apartments in Sunny Beach and Bansko  the two biggest beach and ski resorts in Bulgaria respectively  are similar. Those looking to buy a holiday home can buy an apartment for about 500 Euro/sq.m. as most properties offered at that price are finished and furnished apartments in functioning developments. 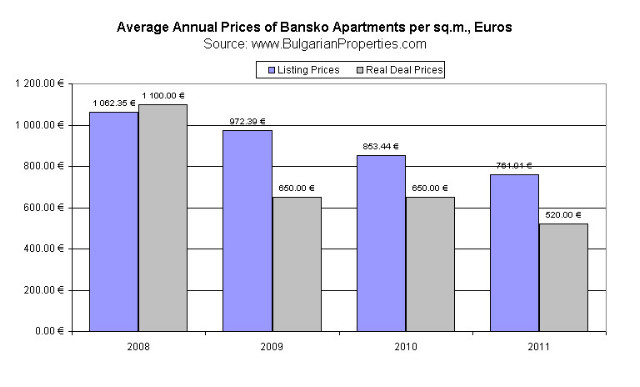 Share
Properties in Bansko
Buy your own property in the top ski resort of Bansko! An all-year-round resort suitable for winter and summer tourism with the best prices in Europe! Prices starting from as low as 10,000 Euros!
See More
Rural Houses in Bulgaria
A real peace of heaven in the Bulgarian countryside! Your own holiday home in a magic world hidden from the stress and noise of the urban life we are all getting tired of. Let's take off for a journey back in time!
See More
Follow us