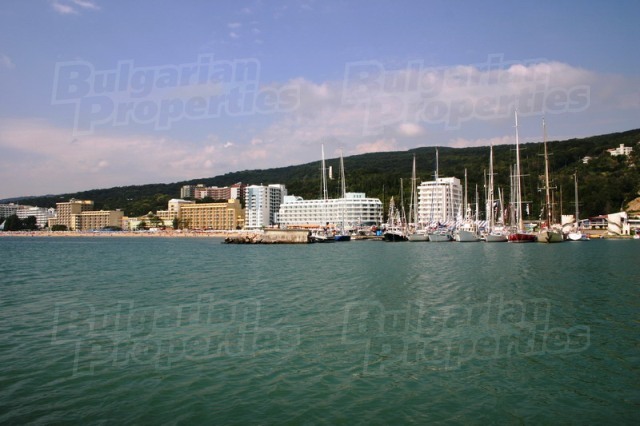 In contrast to 2010, when property prices dropped by about 10%, in 2011 we are witnessing an average decrease of 5% in the prices of different property types. The good news in the last few months is the increase in the number of concluded deals which is the first long-awaited positive signal for the beginning of the recovery of the Bulgarian property market.

In the first half of 2011 the most dynamic markets were those in the capital Sofia and along the Southern Black Sea coast. The market in Sofia is driven solely by Bulgarian buyers and the seaside market  almost entirely by Russian buyers. According to BULGARIAN PROPERTIES' data sales in these two areas make up 40% of the total number of sales in the country, which makes them the trend-setters on the residential market and in the holiday home segment.

Highlights of the last quarter:

 An increase in the number of concluded deals in Sofia, a 5% drop in the prices of apartments sold in the capital year-on-year and a 2.5% increase in prices compared to the previous quarter
 A more dynamic holiday home market focused mainly in and around the resort of Sunny Beach and deals with apartments priced between 450 and 850 EUR/sq.m. mainly with Russian buyers
 Almost no interest in the ski resorts and a continuing price drop of Bansko properties
 A decrease in the prices of rural properties of 6% compared to the previous quarter

The dynamic sales in the capital Sofia from the first quarter of 2011 continued in the second quarter which makes 2011 more successful for the Sofia property market than 2010. The latest data shows that in the last couple of months there is a trend for buying cheaper apartments in Sofia  between 30,000 and 45,000 Euros and the market of luxury properties slowed down with the beginning of the summer season. 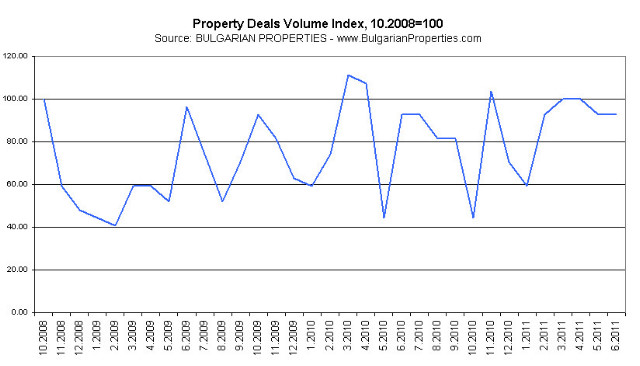 According to BULGARIAN PROPERTIES data in 2011 there is a considerable increase in sales in Sofia compared to 2010, on the background of about a 10% increase in the number of deals around the country for the first half of 2011 compared to the same period in 2010. 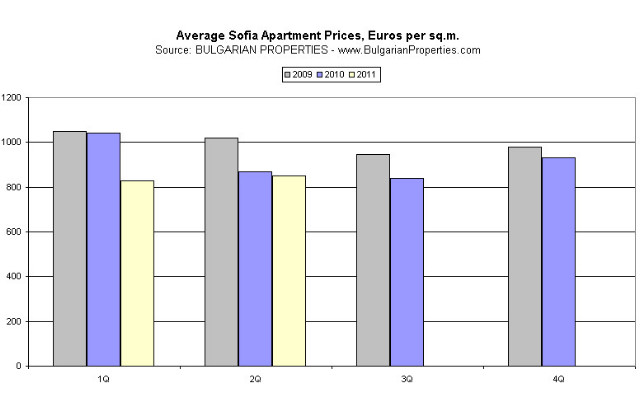 The more dynamic market in the beach holiday home segment, especially in the area of the resort of Sunny Beach, which we have been witnessing since the summer of 2010 has considerable positive effect on the real estate market in Bulgaria.

Most deals are concluded along the southern Black Sea coast the main reasons for that being the decrease in property prices and the big supply. Data shows that it is properties priced under or close to their cost price are those that sell. With resales it is often the case that sellers agree to part with their property at a price up to 60% lower than the one they paid in the property boom years (2006-2008).

The number of deals increased with the beginning of the summer season and we expect the interest in the Bulgarian Black Sea coast to remain stable in the next few months, especially during the high season. The number of concluded deals has increased by about 50% compared to the same period in 2010 and the average price of deals with apartments is 31,720 Euro in 2Q 2011. Sales are made mainly in the area of the resort of Sunny Beach. 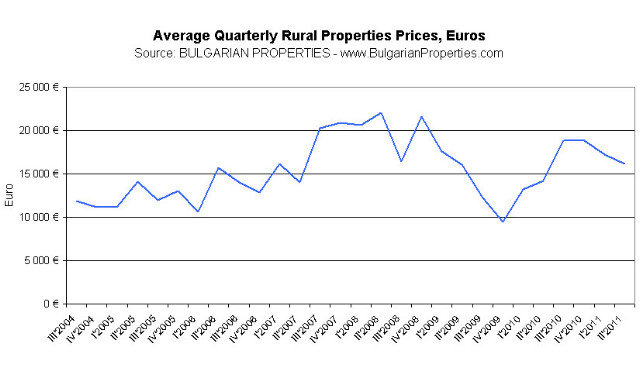 According to BULGARIAN PROEPRTIES data more than half of the deals are with apartments in the lowest price segment and over 95% of the sales in the area of Sunny Beach are concluded with Russian-speaking clients. This shows that the focus of interest of the Russian buyers has shifted from the area they traditionally like best  the region of Varna, to the south mostly due to the lack of flexibility of the sellers in the region of Varna. The reasons for this lack of flexibility are various but the most important one is the lack of such overdevelopment in this area compared to the area of Sunny Beach.

Interest in the resorts along the northern Black Sea coast is lower as deals with holiday apartments are concluded at prices up to 30,000 Euro. In the last few months there are more sales of rural houses close to Varna.

The summer season means a standstill on the property market in the Bulgarian ski resorts but that said it should also be mentioned that in 2011 the winter season was also not very dynamic in terms of property deals. The number of concluded deals in Bansko and the area remains low and the number of sales is similar to that in the previous quarter and last year. The average price of apartments sold in the last three months in Bansko is 27,000 Euro as the average price per sq.m. is 460 Euro. These are fully furnished apartments in functioning developments. Just to compare, during the previous quarter deals in Bansko were concluded at about 585 EUR/sq.m., which makes a drop in prices of 20% based on actual concluded deals.

Although prices are extremely low there is almost no interest and is focuses on really undervalued properties which are sold at unrealistically low prices and whose owners are ready to sell at a big loss of up to 60% of the price paid before the crisis.

Most deals with rural properties are concluded in Central Bulgaria  around Plovdiv and Stara Zagora, as Bulgarian buyers are also interested in these areas. Rural houses in which buyers are most interested are priced up to 15,000 Euro or are in a very good condition and are ready to live in with prices between 25,000 and 40,000 Euro.

Average prices of sold rural properties as per region:

The buyers driving the market are mainly Bulgarians and Russians  this trend was established in the last few quarters. The nationalities of the potential buyers are not so diverse now and at present it is Russians and Bulgarians who are the most active on the property market. Deals with British buyers are rare and they are focused mainly on the cheapest properties  mainly rural houses. There are some deals with buyers from other nationalities, but they are random and cannot be called a trend.

Russian buyers mostly look for beach apartments. They want to have a holiday home with all the necessary amenities, close to shops, restaurants, etc. That is also the reason they prefer furnished apartments in functioning holiday developments. They are not very active in the Bulgarian ski resorts, but find the spa resorts more attractive although there isnt big supply in the established spa resorts in Bulgaria and what is offered on the market are more expensive properties, while at present Russian buyers look for cheaper offers. Russian buyers look for rural properties that are close to amenities, easy to access and fit to live in. The price range in which Russian buyers conclude deals is between 10,000 and 50,000 Euro depending on the property type. Most deals are for beach apartments at prices between 20,000 and 40,000 Euro.

The economic growth in Bulgaria as well as the big discount of property prices in the last couple of years led to an increase in the number of property deals, which is the first positive signal for the Bulgarian real estate market.

However, the negative factors are still prevailing and they influence the market in the short run: after a growth in the beginning of the year the number of granted loans decreased compared to 2010, foreign investments continue to decrease, as well as the issued permits for building new residential buildings. Other negative factors include the general insecurity for coming out of the crisis of the EU states, the deepening sovereign debt crisis, as well as the overall state of the global economy.

Our forecast for 2011 was the number of deals to increase (which is already a fact) and upon a positive development of the economy and a realization of the forecasts of about 3% economic growth (initial data showing it is also a fact) property prices to start increasing at the end of 2011 until the spring of 2012. Taking into consideration the difficult situation with the sovereign debt crisis in Europe and the greater insecurity related to the economic recovery, the more realistic scenario is 2011 to end with a minimal decrease of average property prices of about 2%.

As for the capital Sofia, which is the largest local property market, the number of issued permits for new buildings is still low and developers are afraid to initiate new projects at the moment. According to BULGARIAN PROPERTIES a process of selling out the existing finished new apartments has started and the process will probably end by the end of 2013. Only after that and if there are suitable economic and market conditions will we witness a growth in the supply of newly-built properties. With older buildings the deals and the demand are constant but it can be said that in a few years time there might be new processes of migration from older buildings to more modern solutions which will additionally stimulate the construction of new residential buildings.


Share
Rural Houses in Bulgaria
A real peace of heaven in the Bulgarian countryside! Your own holiday home in a magic world hidden from the stress and noise of the urban life we are all getting tired of. Let's take off for a journey back in time!
See More
Belle Epoque Beach Residence
French style beachfront residence in the popular beach resort of Lozenets on the Southern Black Sea coast. The complex is completely finished and fully operational. Check out the last available apartments for sale.
See More
Follow us