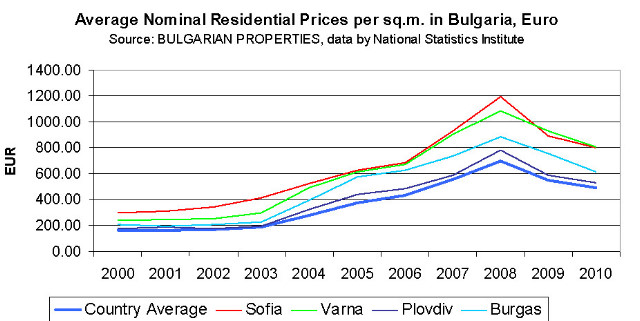 With the end of the first decade of the new century, during which we witnessed the beginning of a modern real estate market in Bulgaria, we from BULGARIAN PROPERTIES decided to turn back and make an overview and to strike a balance of the existing data of the properties in Bulgaria in the last ten years.

We witnessed a very dynamic ten years in the Bulgarian property sector which brought about drastic increase in prices and in the number of deals, as well as more dynamism to the building sector followed by a plummeting in the last two years.

We used the data of the National Statistical Institute (NSI) as a basis for our research, it being the most comprehensive existing statistics of property prices. This information is relative only to residential properties  apartments in regional cities around the country. Even though it doesnt include holiday properties, rural houses, plots of land and commercial properties it is comprehensive enough to show the main market trends and the directions in which the market developed. The housing fund data and the issued building permits also come from the NSI, and the data about the number of sales come from the Registry Agency. All calculations, data transformation and graphs were made by the Property Market Analyses and Forecasts Unit of BULGARIAN PROPERTIES. 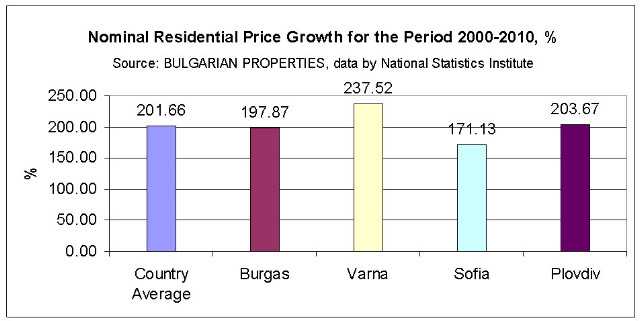 The main highlights of the analysis are as follows:

I. Average prices and increase of home prices through the years

In the period 2000-2008 prices of apartments continuously increased as the peak in their value was reached in the third quarter of 2008 followed by a plummeting in the number of deals and in property prices in the next 2 years. The highest prices of apartments were reached in Sofia and Varna, as in Varna the price decrease was more gradual and at the moment the price per sq.m. in the two biggest cities in the country is almost the same  the average price per sq.m. in Sofia in 2010 (802 EUR) is only about 5 EUR lower than that in Varna (807 EUR). The accumulated nominal decrease of property prices from the peak in the third quarter of 2008 until the last quarter of 2010 is 33.31% on average for the country and 36.6% for the capital Sofia.

Average prices of apartments around the country registered a nominal increase of 201.66% in the last 10 years. The average annual appreciation of apartment prices in the country in the past 10 years is 11.65% which shows that even after the big price drop in the last 2 years investing in a residential property is a sound investment in the long run. What is important is to decide at which point of the market cycle is best to buy a property and how long to keep the property before selling it so it is liquid; it is quality properties that are liquid and investing in is such properties is the best choice. 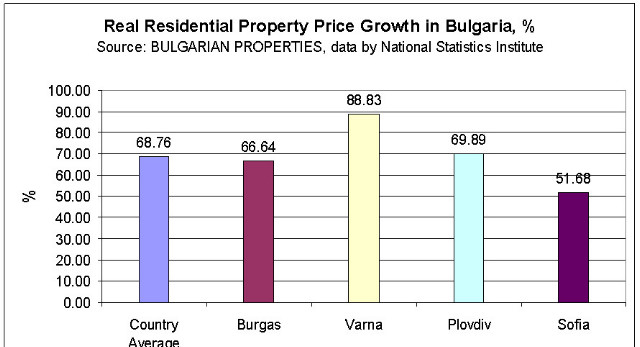 The leader in terms of price increase among the big cities is Varna  with 237.52%, as the price increase in Sofia is below the average for the country  171.13%. The average annual appreciation of apartment prices in Sofia and Varna is 10.48% and 12.95% respectively.

The towns with the biggest increase in property prices in the last 10 years are as follows:

An explanation for the big price increase in these towns should be sought in the fact that prices of properties there were very low in 2000  starting from about 77 EUR/sq.m. and in the next years they compensated with a bigger increase in order to catch up with the average prices around the country.

When talking about increase in prices we should also take into consideration the inflation. That is why we deflate current property prices with the harmonized index of consumer prices (HICP) in order to follow the real increase of property prices. Here is the data after deducting the inflation.

On average, prices of apartments around the country increased by 68.76% for the period 2000  2010. Even after the price drop we have a positive real increase in their value.

The biggest real increase is to be found in Varna  88.83% and for Sofia this increase is 51.68%. The accumulated real decrease in prices after deducting inflation starting from the price peak in the third quarter of 2008 until the last quarter of 2010 is 36.6% (on average for the country) and for Sofia it is 39.7%. 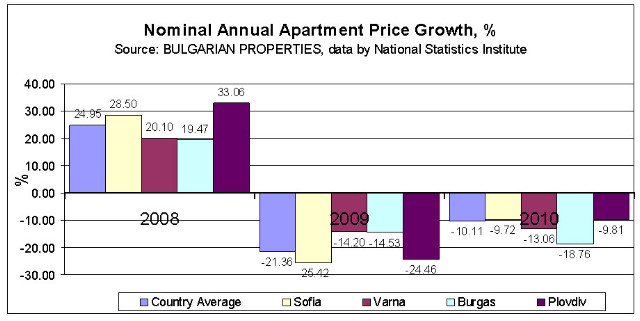 What followed are two years of price decrease  of about 22% and 10% nominally in 2009 and 2010 respectively. The real decrease of apartment prices after deducting the inflation for these two years is 23.26% and 12.75% respectively. This means that although price decrease slowed down in 2010 the price growth is still in the negative zone of the graph. The trend of coming out of the negative and going to positive growth is obvious and our company forecast this growth to start at the end of 2011 if there are no economic shocks and there is positive economic development.

Compared to the previous quarter in 2010 the decrease is already under 5%, as prices of Sofia apartments even have a zero and positive growth in the 2Q and 3Q of 2010. 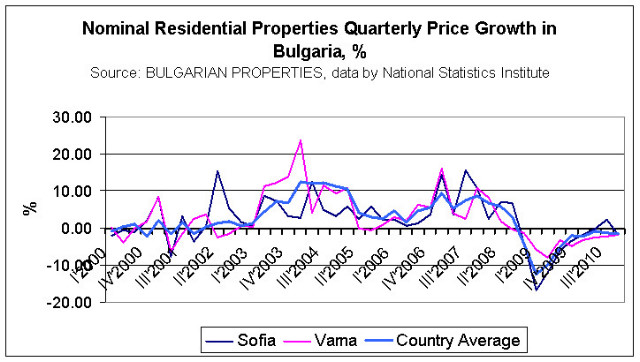 When we compare the data to the same quarter of the previous year we see a trend showing smaller and smaller decrease in prices starting from the 3Q 2010, as prices of apartments in Sofia once again show the smallest decrease compared to the general prices around the country and to those in Varna.

II. Number of property deals in the regional cities

Sales volumes are an extremely important indicator of the trends on the property market as they give early signals for weakening or strengthening of the market and therefore of property prices. 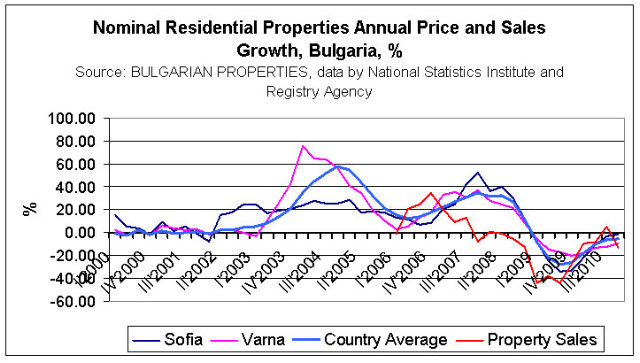