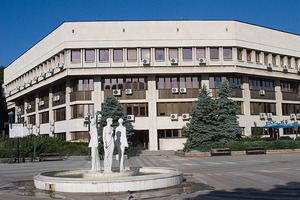 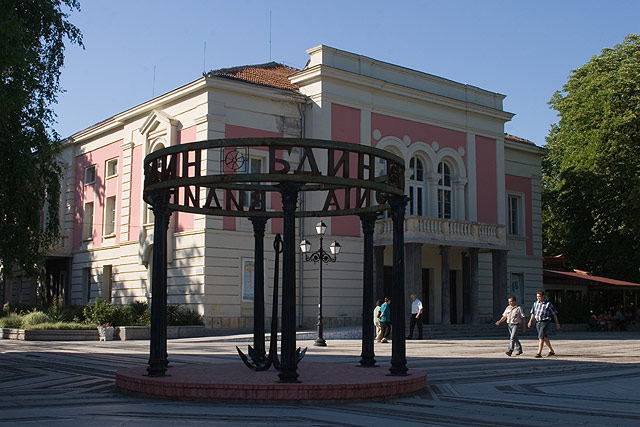 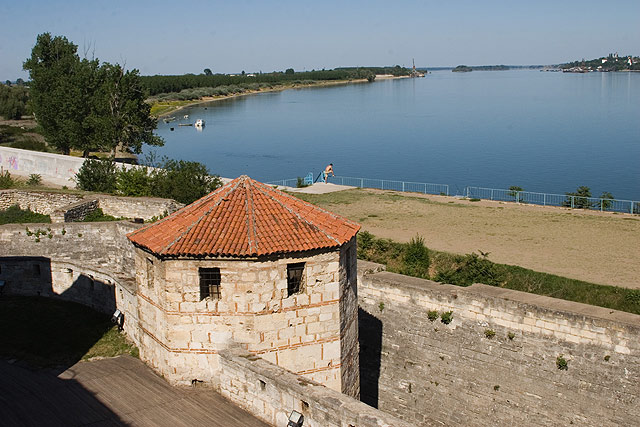 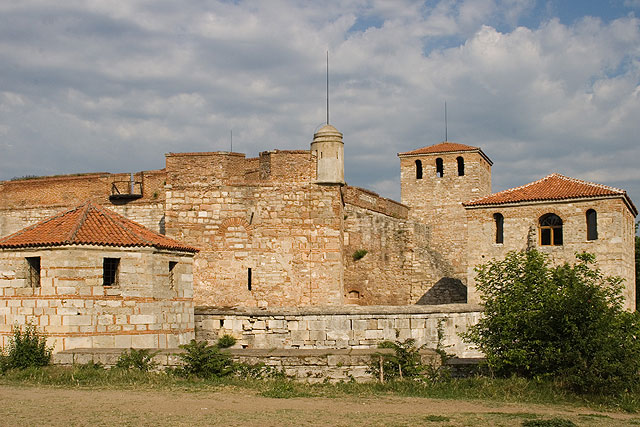 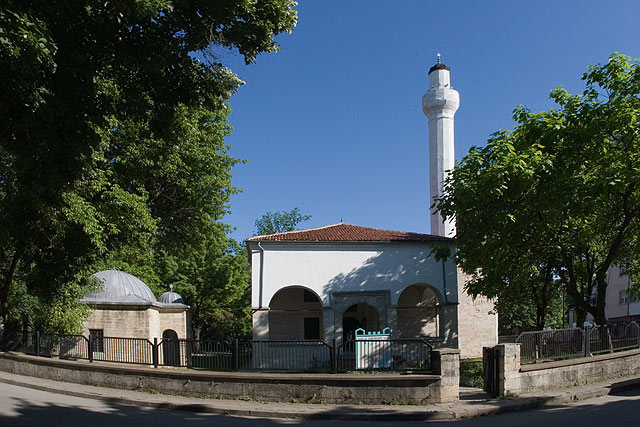 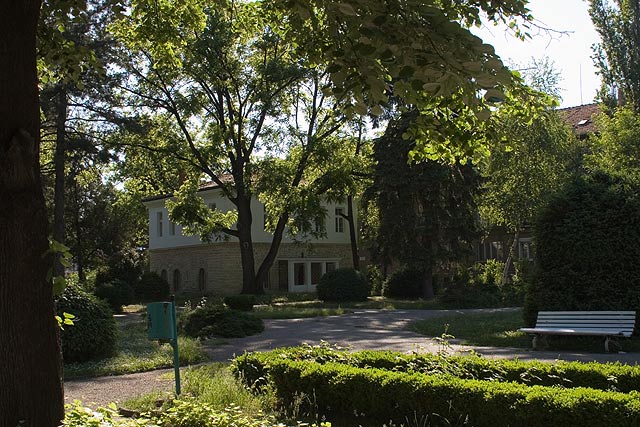 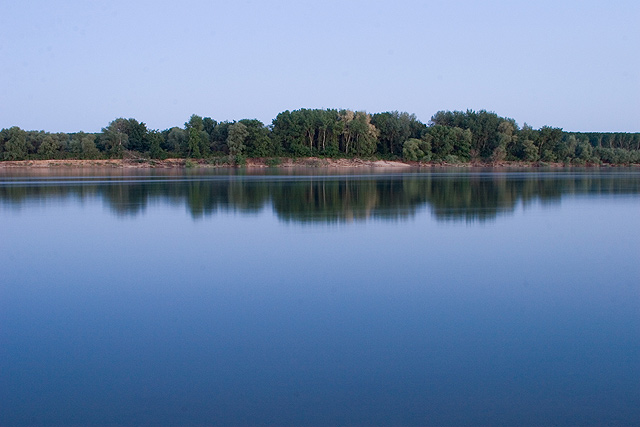 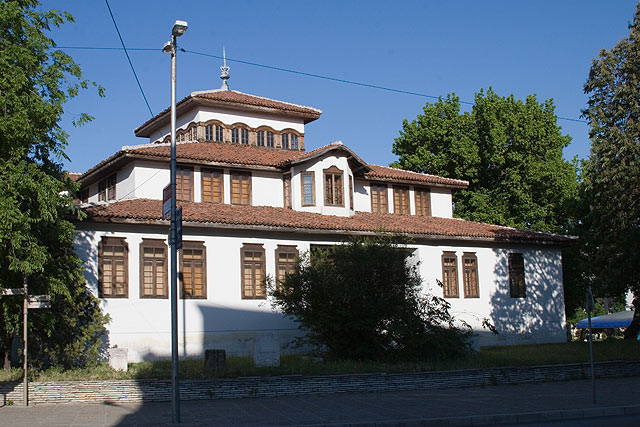 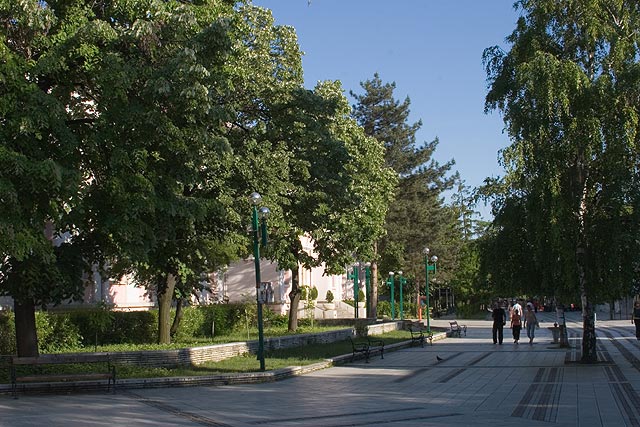 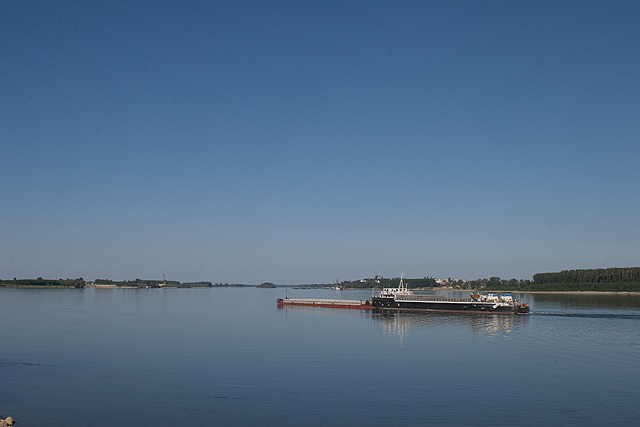 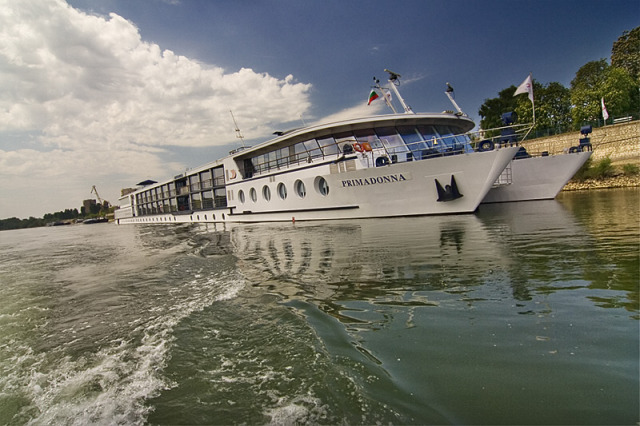 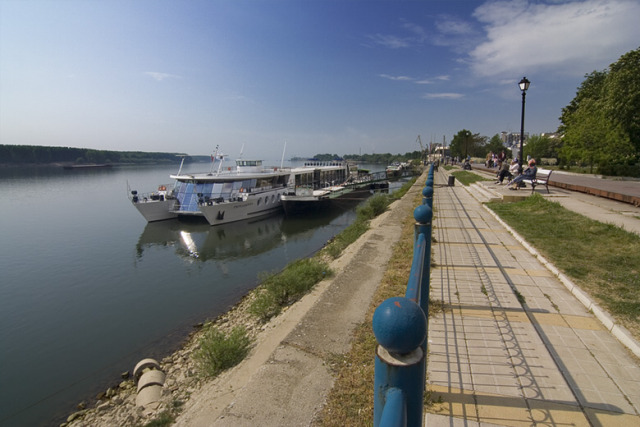 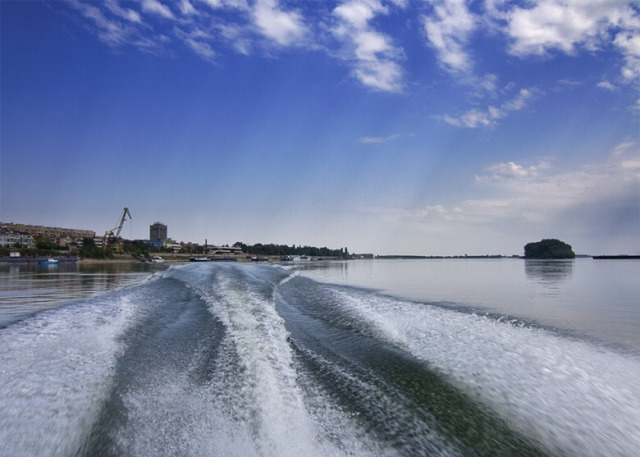 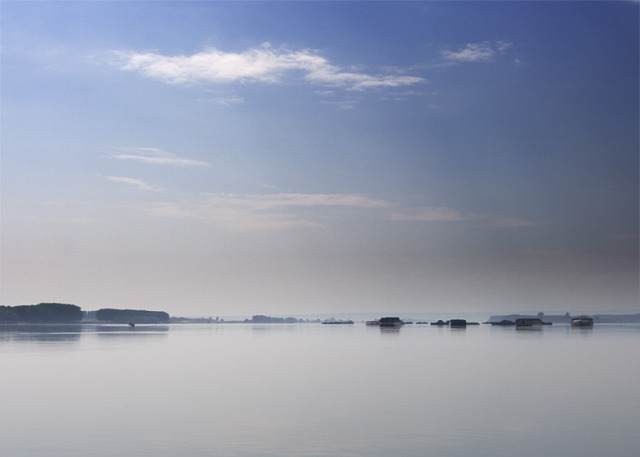 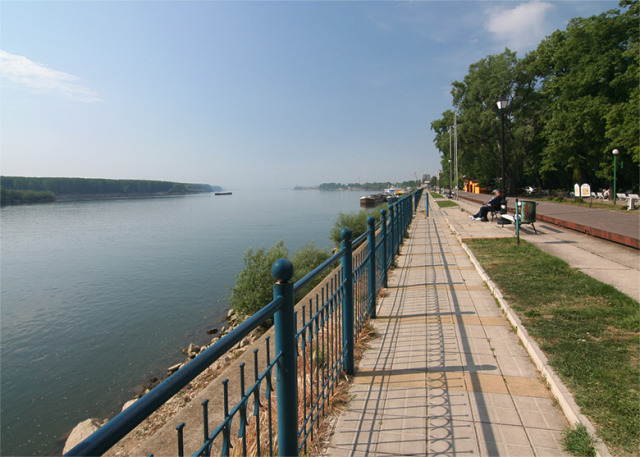  Download the film "Bridges of Vidin (Click on this link with the right button of the mouse and then click "Save target as"), showing the town and its attractions.

Town of Vidin (57 614 inhabitants, 20-25 m above sea level) is situated on the bank of the Danube River, on its big curve in the most northwestern corner of Bulgaria. It is 199 km the northwest from Sofia, 102 km northwest from Montana, 52 km north from Belogradchik, 56 km northwest from Lorn and 30 km south-east from the border town of Bregovo.
It is one of the oldest Bulgarian towns. It is a regional administrative centre.

The past of this town dates 23 centuries ago. As early as 3rd century BC the Celts built a settlement here with the name Dounonia (a high and fortified place). The Romans put into final shape the fortress with the purpose to guard the border road along the Danube and named Bononia. Bulgarians named the town Bdin, and Byzantines -Vidini. In the meantime it was ruined and built again many times. In 1003 Gavril Radomir, the son of the Bulgarian Tsar Samouil, stood the 8-months siege of the Byzantine Emperor Vassilii II. The town reached the greatest flourishing at the end of 14th century, when it became a capital of the Bdin Kingdom of Ivan Sratsimir (1360). It has been a port on the river and an important trade centre of goods not only for domestic needs, but also for transit trade with Vlashko (Romania), Madzharsko, Dubrovnik, etc. A gospel from 1360 says that it was written in "the great and crowded town of Bdin". The rise of the town ceased in 1396 when the Turks invades it. Since then Bulgaria started counting the 482 dark years of Ottoman rule, the 127195 endless days of persecution, terror, human misery, assimilation and overt genocide. In those centuries Vidin had been a great fortress and an important administrative centre. In 17th century it was even called "the main town of Bulgaria".

In 1794-1807 the town became a centre of the absolute Turkish military leader Osman Pazvantooglu, who declared himself an independent ruler of a considerable part of Bulgarian north-western territories. During his rule construction on a large scale developed in the town - new streets were made, big administrative buildings rose, mosques and medreses (Islamic religious schools) were built, etc. Some of them are preserved even till now. Vidin gradually turned into an oriental town, especially after the settlement of some Turks after the defeat of the Turkish army near Vienna and the liberation of Serbia. Expression of desperate fight for national liberation was the famous Vidin Uprising of 1850 headed by Boiadzhi Stanko Voivoda.

Gradually with development of shipping along the Danube and with the strengthening of the trade ties with Central Europe the standard of living of its inhabitants rose. Through Vidin Port Austrian Shipping Co. bought the production of the whole Western Bulgaria, incl. Macedonia. That went on till 1866 when neighbouring Lom was connected through a road with Sofia and replaced Vidin.

After the Liberation (1877) the town changed basically its ethnical population in favour of the Bulgarians. During the Serbian-Bulgarian War after the Union of Eastern Roumelia with the Bulgarian Principality (1885) Vidin was successfully defended by captain Atanas Uzunov. The town is a birthplace of the eminent Bulgarian social activist Naicho Tsanov and of world famous post-impressionist artist Jul Pasken (Lulius Pinkas, 1885-1930), a brilliant representative of the Paris School of Art.

Baba Vida Fortress-Museum (tel.: +359 94 22884) - it is named after an old legend - it is the biggest historical sight of Vidin and is the best preserved medieval Bulgarian fortress in the country. It has been built in different historical periods from 3rd century till the end of 19th century. Most active were the construction works under the reign of Ivan Sratsimir. The main body of the fortress of that time is preserved even today - the main turrets and bastions, as well as the inner surrounding wall that connects them. A museum exhibition is arranged in the fortress. There is a theatrical scene and dramatic performances with historical plots are played among the unique scenery.

The Vidin fortified system, known also as the Turkish Kale, was built in 17th-18th century. Today in a comparatively good outlook are preserved the fortified wall facing the Danube, the northern sector of the fortress facing the town with its 4 gates - Stambol kapia, Pazar kapia, Nechire kapia and Florentin kapia. The system has the form of a semicircle seesaw line of 1800 m diametre, touching the Danube River. Seen from the land the fortification consists of a moat and a ground rampart, whose corners are formed by 8 stone 5-angle bastions. With the construction of the Kale and including the Baba Vida Fortress as a main citadel in the common defensive system, in the second half of 18th century Vidin became a first-class key military point along the Danube.

The Town Historical Museum (tel.: +359 94 25609) is one of the richest and best-arranged museums in the country. It is housed in two buildings - in the former Turkish Konak (police office) from 18th century are arranged the Archaeology, Revival Period and National Liberation Movement sections, and the Ethnographic section is placed in the Krustatata Kazarma (barracks building like a crest) - an original architectural monument from the end of 18th century.

There is also the Mausoleum of the first Bulgarian Ekzarh Antim I. The library of Osman Pazvantooglu (from about 1800, a monumental construction with original oriental architecture and woodcarving). The St. Pantaleimon Church from 1634 is the most precious monument of Bulgarian architecture and art in the town from the age of Turkish rule. The St. Petka Church from 1633. The St. Dimitur Cathedral. The building of the military club, in which the Town Art Gallery is housed, the Teketo (Islamic monastery) Saldahin Baba, Hadzhi Angel's House, the Synagogue and many other interesting cultural and historic monuments. There is a Theatre of Drama in Vidin too.

Two kinds of transport connect the town to the rest of the world - road and railway. There is regular bus transport to Sofia, Montana, Lom, Vratsa, Belogradchik and many other smaller settlements in the region.

There is also a new river station (since 1992 there are is regular passengers transport from Bulgaria) and in the northern part of the town operates a ferry port (tel.: +359 94 24979), through which an extremely important ferry connection with Kalafat (Romania) is established. It serves a considerable part of the tourists stream to and from Bulgaria. There is a town bus transport in Vidin as well.

The Danube, a large European river (a border between Bulgaria and Romania) runs past the town, which is situated on its right bank. It offers wonderful opportunities for sunbathing, swimming, fishing, water sports tourism and many other activities. There is a big water tourist base in the northern suburbs of the town. Excursions along the river can be done with small entertainment ships, hired at the river station. The Danube is an exceptional natural wealth, which shall be used by the future generations of the ancient town.

Ratsiaria is the name of the ancient Roman town near the village of Archar, 27 km to the southeast of Vidin near the Danube River. Its remains are 2 km to the west of the village. During the reign of Emperor Aurelian the town became a capital of the province Dakia Ripenzis and took the name Ulpia Ratsiaria. It was a rich and crowded town. The masterpieces of its goldsmiths made it famous in the whole empire. In 447 the Huns devastated the town, but it rose again to be ruined in 586, this time forever. There is a regular bus transport from Vidin, as well as from Lorn.

The Bojuuritsa Park (near the village Sinagovtsi) is situated between the rivers Milchina and Vidbol, 18 km to the southwest of the town. There is a dam lake with opportunities for water sports, fishing, sun bathing and other activities. There is a chalet in the park with the same name, which has 24 beds in 2-bed, 3-bed and 5-bed rooms and 10 beds in 2-bed bungalows. Telephone 266 through the post office in the village of Sinagovtsi.

Today Vidin is a middle-size Bulgarian town. Has many interesting places, shops, restaurants, etc. The town has a lot to offer from amusement and tourism point of view. The Danube port of Vidin is a regular stop for the Danube Cruise international ships with tourists from all Danube countries, USA, etc.

Other schools available in Vidin are: School of Mathemtaics, Engineering school, Music school, School of Arts, etc. Also available is a faculty of a University with regular lectures.

Being on major international roads and cross-points the Bulgarian and the Romanian Governments decided to build a bridge in Vidin over the river, to connect both countries and roads. The construction already started. Soon Vidin will become one of the main points on the European road. The construction of the new bridge is financed with fund by the European Union. Another interesting point from the future plans for development of this region is a new first class road to Sofia which will cross the Stara Planina mountain through a tunnel at the foot of the mountain. This will shorten the distance from Sofia to Vidin to 145 km.

Properties for sale in Vidin and around

Join us on a journey back to nature!
See More
Euphoria Club Hotel & Resort - your paradise in Borovets!
Fully furnished studios, 1- or 2- bedroom apartments in a unique complex in Borovets. All-year-round complex with all needed facilities for your comfortable stay - lobby bar, reception, bar and restaurant, outdoor and indoor pool, SPA center, underground parking and many more. Choose your holiday home here! No buyer's commission! Suitable for rental income.
See More
Beach Villas on the Bulgarian Black Sea Coast
Searching for your own place in the sun?
Explore our selection of lovely houses and villas situated in the beach resorts and in the villages nearby! Prices with no competition in Europe!
See More
Follow us