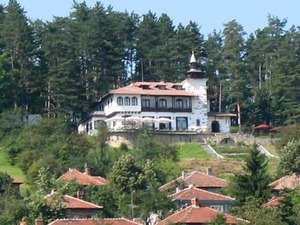 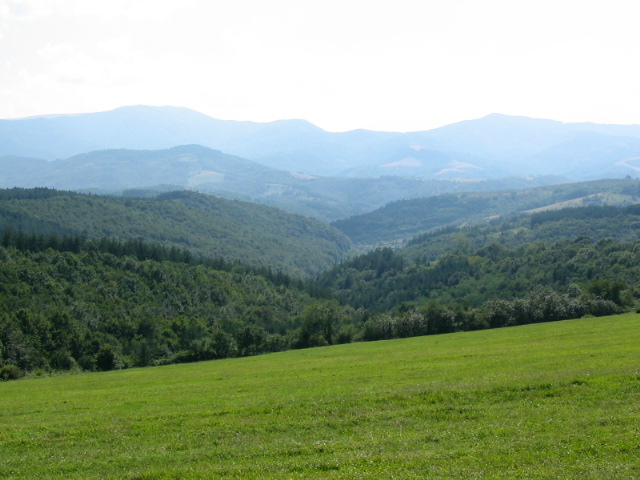 At the North foot of Stara Planina, 20 km from Gabrovo, is Tryavna - a centre of the Bulgarian Revival spirit. The old part of the town is an architectural reserve with its 140 monuments of the Revival architecture. Wood-carving and icon-painting brought the unfading glory of Tryavna. The town is well famous for its Art School in Woodcarving and Icon drawing. Other unique places are the Museum of woodcarving and icon-painting in Daskalov's House, St. Archangel Michael Church (1819), the Revival ensemble with the Clock Tower (1814), the old stone fountains and the Arch bridge (1845). In August the city hosts the Summer Holiday of Craftsmanship and Arts.

The Museum of Tryavna icon-painting school exhibits 160 icons created in the period of 17th-19th century, autentic tools and paints that had given birth to the expressive and living images of the Christian saints.

Sheltered behind thick walls Daskalov's house keeps two never setting suns. Born by the creative six-month competition between two masters, they shine from the carved ceilings for more than 200 years.

The clock tower and the church Archangel Michael were built in order to form the central town square. The situation of the church in the town square was quite unusual for that time. During 1848-1852 another one, even bigger church was erected on the same square (St George).

The clock tower in the centre of the town is quadrangular with stone bricks. The upper part is a sharp pointed dome on columns, decorated with a styled metal dove. Inside there is a wooden staircase leading to the third floor - where the clock mechanism keeps working for over 190 years. The clock mechanism puts into motion a bell that rings every hour.

The church St Archangel Michael has a pseudo basilica covered with tile stones. The church is dug into the ground which is typical for the Bulgarian churches of the 19th century. The church treasures the Tsar's Crucifix, a relic handed down from generation to generation with 12 scenes from the Bible wood-carved on it. The church iconostasis and the bishop's throne have been recognized as masterpieces of the Tryavna school of woodcarving. Icons from the 18th century are placed there. The church was burned down during the Ottoman yoke and later rebuilt in 1819 over the old foundations.

Now the town of Tryavna continues the traditions of the past producing furniture, woodworks and textiles. Tryavna also enjoys a moderate and healthy climate and is a tourist centre which deserves visiting.

Enjoy more photos from the town of Tryavna

View Properties for Sale near Tryavna

Share
Properties with video
Only on our website you will find a variety of properties in Bulgaria with videos. Don't waste time, view them online - on your phone, laptop or tablet, at a convenient time and without the need for an inspection trip and personal visit. Welcome for video viewings with BULGARIAN PROPERTIES!
See More
Unique residence in Old Town Nessebar
A property you can't find anywhere else in the world! OLD NESSEBAR only exists in Bulgaria and we have a unique residence for sale in this ancient city which is part of UNESCO's list of World Heritage Sites. Find your home in a place of timeless beauty which has survived through centuries and has preserved the wisdom of many cultures and civilizations. Visit this traditional-style new build residence now with a 360-degree virtual tour.
See More
Hot properties in Bansko - the best offers are here for you!
Buy your own property in the top ski resort of Bansko! An all-year-round resort suitable for winter and summer tourism with the best prices in Europe!
See More
Follow us