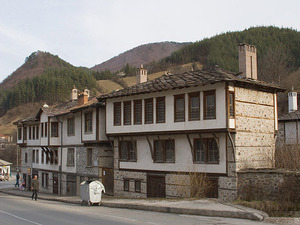 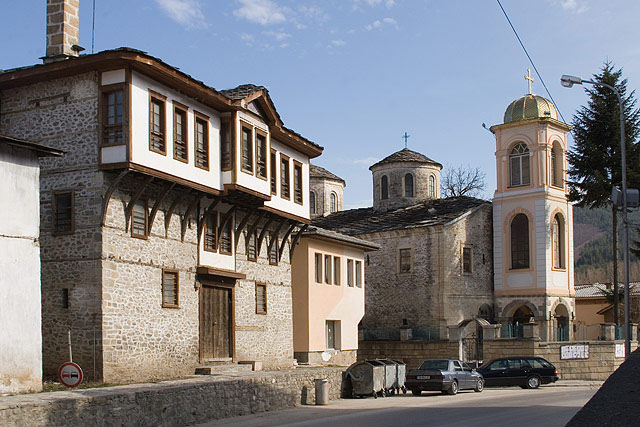 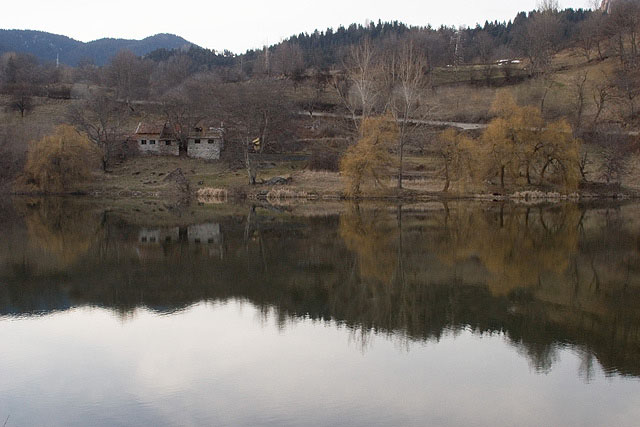 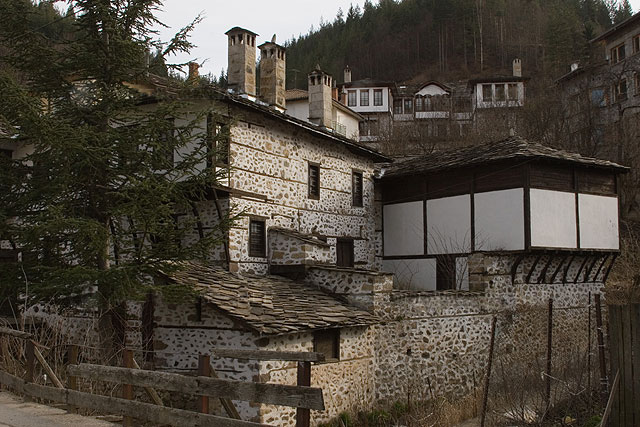 The town of Smolyan (population of 33000 people, 850 to 1050 m above sea level) is picturesquely set in the narrow gorge of Cherna River (Black River), in the most beautiful part of the Rodopi Mountain. It is about 260 km south-east of Sofia, 103 km south of Plovdiv, 87 km west of Kurdjali, 46 km south-east of Devin and 15 km south of Pamporovo Resort. This is one of the most beautiful Bulgarian towns. A regional administrative center.

On the 18th of June, 1960 the three neighboring villages of Smolyan, Raikovo and Ustovo merged in a town, which was named Smolyan, and presently each one of the villages is its quarter. Smolyan Quarter (at the highest altitude) is the successor of the vanished village of Ezerovo, which was situated 3 km above the town, amidst the Smolyan Lakes.

During the period of the attempts to convert the native population to Islam (17th century), its inhabitants strongly opposed this act and the Turks completely destroyed the village. Some of the inhabitants were killed, others ran to the mountains and those who adopted the Muslim religion populated the areas along Cherna River, where the modern quarter lies. The Turks named this new settlement Pashmaklu. This is the name mentioned by the French traveller Dr. Paul Luka (1706) and it is recorded in the inscription of the Overarched Bridge (Beiska Kupriya), built in 1716. The name of Smolyan was given to this neighbourhood after the Liberation and it came out of the name of the Slav tribe of Smoleni. Raikovo Quarter (the quarter in the middle) was divided in the early ages into Gomo (Upper) and Doino (Lower) Raikovo.

A legend tells us that the fellow of Momchil the Hero, Raiko founded this settlement. During the attempt to convert the population to Islam, its inhabitants strongly resisted, paying for that with more than 200 victims, but they preserved their religion and village. The first written document about this settlement dates back to the inscription on a stone of the Mazolska drinking-fountain (1572). It developed as a craftsmanship village. Its aba (coarse homespun woolen cloth and upper men's garment made of it), woolen cloths and rugs were famous throughout the Ottoman Empire. Its economic power during the Revival Period revealed in the building of nice houses of typical Rhodopi architecture, churches and schools. Ustovo Quarter (the lowest) is an old settlement. Its name is linked to "ustie" (estuary) or "ushtelie" - i.e. it originated from the geographical location of the settlement. It is situated on an important crossroad - this was the crossing point of the old roads from Plovdiv to Xanti and Gyumyurjina and from Drama through Nevrokop (modern Gotse Delchev) to Kurdzhali and Odrin. This predetermined to a greater extent its economic and historic development.

Ustovo became an important market centre and significant craftsmanship settlement. Crafts like coppersmith, tinkering, shoe-making, goldsmith, and furrier, home-spun wollen cloths and tailoring and others were well developed since early ages. Their products had good market, most of all in Istanbul and Smirna (Izmir).

At the beginning of 19th century the village achieved great economic and cultural boom. Almost all of the interesting sites and buildings date back to that period. In 1830 the first monastery school was founded. Priest Gligorko, one of the prominent defenders of Bulgarian population, lived and worked in Ustovo. This is the birthplace of some prominent Bulgarians, such as Sava Stratiev, fighter against Phanariotism and Stoyu Shishkov, a teacher, ethnographer and a man of letters. After the Liberation the entire Smolyan region remained under Turkish Rule until 1912. Landmarks. In Smolyan Quarter: The Revival Period houses - Meramovs', Sarievs', Prissadovs', etc. The overarched bridge (Beiska Kupriya) across Cherna River, built in the beginning of 18th century.

Chinar Nature Reserve (sycamore tree) - a 250-years old tree. The Planetarium (20, Bulgaria Blvd., tel.: 0301 23074) is the biggest in Bulgaria. The Museum of the History of Mid-Rhodopi Mountains (New Centre Complex, tel.: 0301 24603), houses more than 150 000 exhibits. The Town Art Gallery (New Centre Complex, tel.: 0301 23268) accommodates thousands of masterpieces of artists and sculptors. In Raikovo Quarter: Pangalov's House - valuable architectural monument of culture dating back to 1860, Alibeev Konak - an old residential and agricultural complex in the upper part of the quarter. The Cheshitev's House in the Cheshitska area - housing interesting typical Rnodope houses from the Revival Period in Doino Raikovo.

Memorial and Charnel-House in honour of the inhabitants of Raikovo, who died for freedom. St. Nedelya Church (1836 e.) has a rich collections of icons. Mazolev's Drinking-Fountain bears the inscription, evidencing the first mention of the village. In Ustovo Quarter: Mednikarska Charshiya (the old coppersmith marketplace), Hadzhiivanov's House, which provided shelter to the headquarters of the Russian troops in the region during the War of Liberation (1877- 1878).

The Sheremetev's, Takov's, Hadzhi- chonov's Houses are also within this area. The Kelyav's House bears the inscription of ser- geant Parhomenko, which informs that some Cossacks from the First Squad of the II Regiment stayed there. St. Nikola Church is remarkable with its plentiful, rich wall paintings and original architecture. The new, modern centre of the town is a skillful combination of local traditions and existing environment. Its construction was completed in 1983.

The Rhodopi Theatre of Drama (Bulgaria Blvd., tel.: 0301 25178) is successfully functioning in this nice town. The town is also a university centre - it houses the Pedagogical Faculty of Plovdiv University "Paisii Hilendarski". Accommodation: Smolyan Hotel (3-star, in the centre of the town, 3, Bulgaria Blvd.) is the biggest in the town. Cypress Private Hotel (31, Sokolitsa Str.). Markelov Private Hotel (14, Nikola Philipov Str). Mechta Hotel (within the region of Smolyan Lakes). Ezerata Hotel (within the region of Smolyan Lakes, transport provided by bus line No. 4). Sokolitsa Hotel (47, 1st May Str, next to the bus station). Boarding house of the Pedagogical Faculty (32, D. Petrov Str.). Esperanto Tourist Complex. Smolyanski Ezera Chalet (Smolyan Lakes) is situated in the area of Smolyan Lakes. It has 43 beds. The public bus line No. 4 stops close to the chalet. Smolyan offers a wide variety of catering and entertainment facilities, yet one of the most authentic is Beni Tavern in Raikovo Quarter. Tourist Information: Tourist Information Centre, 4700 Smolyan, 80, Bulgaria Blvd., tel./fax: 0301 38055.

Bus transport is the most popular for Smolyan. There are regular bus lines to Sofia, Plovdiv (every hour), Kurdzhali, Devin, Assenovgrad, Chepelare, Pamporovo (every hour) and to other smaller villages within the region. Public bus stations: Smolyan Bus Station (located in Smolyan Quarter, at the western end of Bulgaria Blvd., tel.: 0301 34251). Bus Station Iztok (East) (in Ustovo Quarter, tel.: 0301 45161). Bus Station Yug (South) (tel.: 0301 45826). Private buses servicing long-distance lines start 7:00 a.m. from the parking lot opposite the Planetarium. 6 public bus lines are regularly functioning within the boundaries of the town. Radio-cab is also available (tel.: 0301 35059).

15 km to the north, up above the town is one of the biggest Bulgarian winter resorts - Pamporovo (refer to Rhodope Mountains related chapter herein). 10 km west of the centre of the town is the region of Smolyan Lakes, known as the "emerald eyes of the RhodopI Mountain". They totalled 20 in number, but presently there are only 7 lakes. The largest one of them - Bistroto Ezero, the so called "clear lake" - is also the deepest and the most beautiful.

The whole region forms a natural park of forests, meadows, hotels, a chalet, chapels, lanes, chair lift to Mt. Snejanka (Pamporovo), picturesque vertical rocks. Bus line No. 4 travels to this region. Smolyan Waterfall - on Kriva (Curved) River, which is the left tributary of Cherna River. The waterfall is 20 meters high and is in the immediate surroundings south-west of the town.

27 km south of Smolyan, in the valley of Arda River is the village of Mogilitsa. It has beautiful Revival Period houses, but the most interesting building is that of the Agoushev's Konak, built in 1843. It was intended for all the year round living (in opposition to the summer Agoushev's Konak in the Chereshovo Area). It has 221 windows, 86 doors and 24 chimneys. It is artistically decorated inside and outside, with wood-carvings on the ceiling, cupboards, railings and shelters.

The Konak tower is flower- painted, and the internal and external architectural design, all in pine, walnut and cherry-wood is splendid piece of art of an unknown Rhodope master. According to the legend, his right hand was cut by Agoush, the owner of the Konak, to make sure that the master will not build another similar masterpiece of art. This is the only preserved medieval feudal castle on the Balkan Peninsula.

There are some 20 caves in the vicinity of the village, the most interesting of them being the Ultsata (Uhlovitsa) Cave (3km east of the village) noted for its miraculous cascade lakes. The cave is easily accessible. There is regular bus line from the town of Smolyan to the village.

10 km north of the town is located the extremely interesting village of Momchilovtsi. Its authentic Rhodope architecture, the local historic ethnographic museum, the interesting habits and traditions, its mild and pleasant climate in all seasons, the delicious local culinary gourmets, its fantastic nature, the availability of a number of family type of hotels and other appealing features turn the village into a special site of domestic and international tourism. There is a regular bus line to Smolyan and Chepelare.

At the middle of the road connecting Smolyan and Roudozem (28 km) is located Mt. Srednogorets (1262 m), called the Rhodope Mt. Shipka. In 1934 a 16-metre high magnificent memorial channel-vault was erected in honour of the soldiers of the 21s' Sredna Gora Infantry Regiment commanded by the legendary Colonel Vladimir Serafimov. During the Balkan War, the above mentioned military unit jointly with the population from the neighbouring villages led a heroic battle against the numerous regular Turkish troops, which were times more than the Bulgarians. Colonel Serafimov disobeyed the order of the Chief Command Unit to withdraw, declaring: "I will never betray to the enemies the villages, which have welcomed me as a Liberator just one day ago!"

St. Atanas Monstery and the legendary peak of Kralyov Kamuk are located to the south in the Rhodope Ridge of Kainadina. Smolyan serves as a starting point for a number of tourist routes in the neighbouring hills and ridges of Western Rhodopi Mountains (refer to the Rhodopi Mountains related chapter herein). The town is also a centre of the emerging national recreation and tourist complex Orpheus, enclosing in its boundaries a significant part of the most beautiful Western Rhodopi landscapes.

See properties for sale in the region of Smolyan and Pamporovo

Search for Related Articles in Our Article Section
Share
Beach residence with a pool and panoramic sea views in Sveti Vlas
Enjoy life in your sea residence! Buy this 4-bed holiday home with a private pool and breathtaking panoramic views of the entire bay of Nessebar! Enjoy breathtaking sunrises and romantic sunsets in your own sea house and let your dreams come true.
See More
Euphoria Club Hotel & Resort - your paradise in Borovets!
Fully furnished studios, 1-bedroom apartments and maisonettes in a unique complex in Borovets. All-year-round complex with all needed facilities for your comfortable stay - lobby bar, reception, bar and restaurant, outdoor and indoor pool, SPA center, underground parking and many more. Choose your holiday home here! No buyer's commission! Suitable for rental income.
See More
Hot properties in Bansko - the best offers are here for you!
Buy your own property in the top ski resort of Bansko! An all-year-round resort suitable for winter and summer tourism with the best prices in Europe!
See More
Follow us