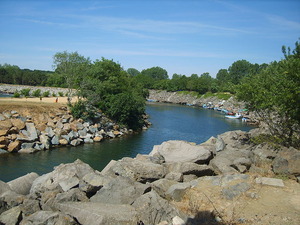 Rezovo is a village and seaside resort in southeastern Bulgaria, part of Tsarevo municipality, Burgas Province, in the coastal Strandzha geographical region. Lying at the mouth of the Rezovo River in the Black Sea, Rezovo is the southernmost point of the Bulgarian Black Sea Coast and the southeastern-most inhabited place in Bulgaria and the European Union mainland.

The village is located 11 kilometres south of Sinemorets, 17 km from Ahtopol and 36 km from Lozenets. As the Rezovo River constitutes the border between Bulgaria and the European part of Turkey, Rezovo directly overlooks the Turkish bank of the river and the Turkish village of Beğendik, in Demirköy district, Kırklareli Province.

Even if the small village of Rezovo has a small, but nice beach, it is rarely used as a holiday place. The village was founded in 1905 but access was not allowed to outsiders before 1989, which makes it one of the still-developing seaside resorts.

Rezovo hosts stables, run by private tourist companies, which offer unforgettable rides and few days` package tours on horseback along the coast and through the depths of the Strandzha Mountain natural park. The mountain was declared a natural park in 1995 (in fact being the largest one in Bulgaria) and is one of the least explored in Bulgaria, which explains the richness of its wildlife. The mountain also has a lot of caves (particularly in its western part), traces of ancient civilisations (such as stone figures, sun discs carved in stone, Thracian dolmens, fortress walls, protobulgarian sanctuaries, etc).

Share
Beach Villas on the Bulgarian Black Sea Coast
Searching for your own place in the sun?
Explore our selection of lovely houses and villas situated in the beach resorts and in the villages nearby! Prices with no competition in Europe!
See More
Properties with 360-degree virtual tours
Feel the unique atmosphere of Bulgarian properties with the virtual tours we offer! At any time, with just one click, you can travel to your dream home, with no need for appointments and trips.

The virtual tours are taken personally by our team and are with guaranteed authenticity. We show you every detail of the property, just like being live in there!
See More
Properties with video
Only on our website you will find a variety of properties in Bulgaria with videos. Don't waste time, view them online - on your phone, laptop or tablet, at a convenient time and without the need for an inspection trip and personal visit. Welcome for video viewings with BULGARIAN PROPERTIES!
See More
Follow us