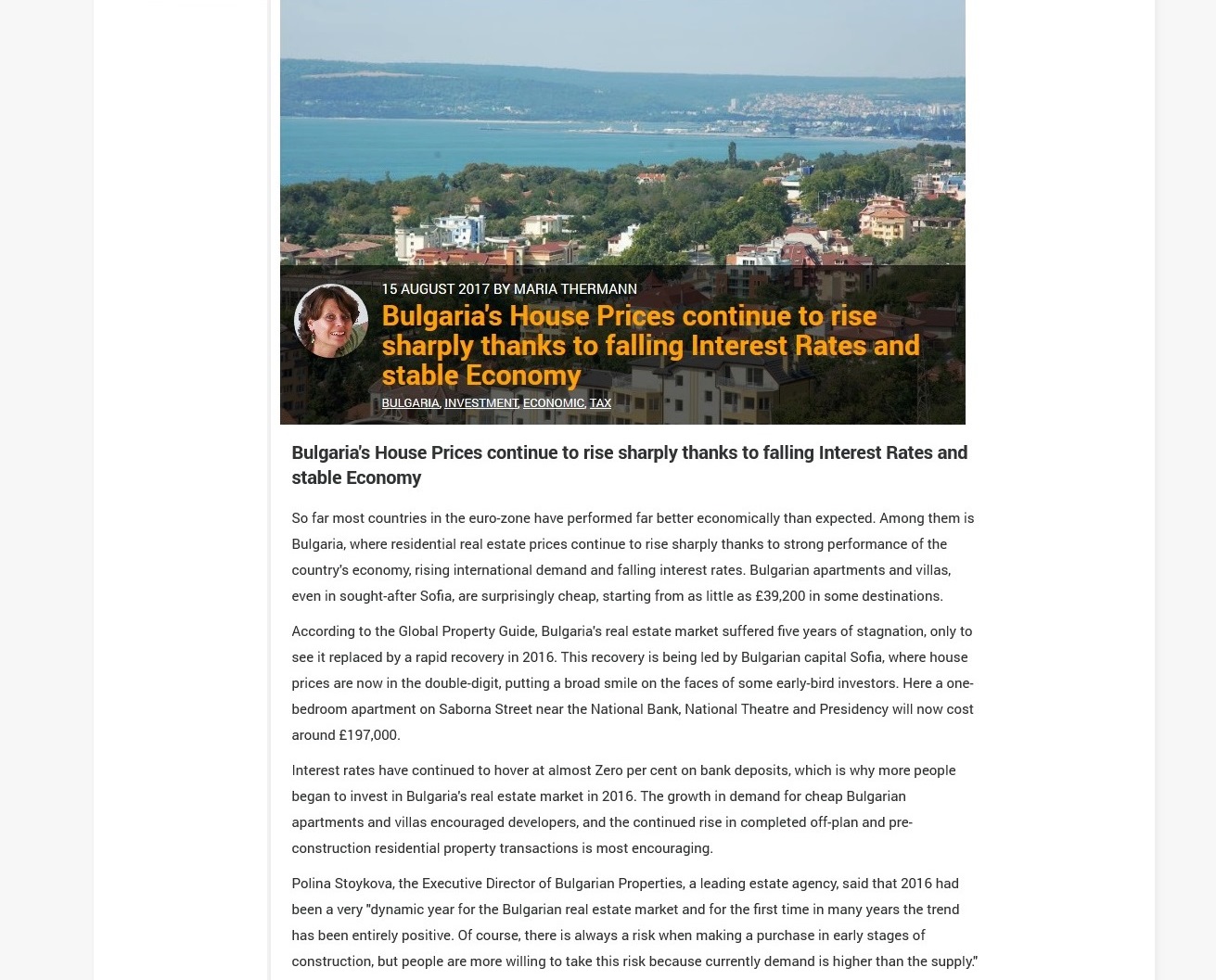 So far most countries in the euro-zone have performed far better economically than expected. Among them is Bulgaria, where residential real estate prices continue to rise sharply thanks to strong performance of the country's economy, rising international demand and falling interest rates. Bulgarian apartments and villas, even in sought-after Sofia, are surprisingly cheap, starting from as little as £39,200 in some destinations.

According to the Global Property Guide, Bulgaria's real estate market suffered five years of stagnation, only to see it replaced by a rapid recovery in 2016. This recovery is being led by Bulgarian capital Sofia, where house prices are now in the double-digit, putting a broad smile on the faces of some early-bird investors. Here a one-bedroom apartment on Saborna Street near the National Bank, National Theatre and Presidency will now cost around £197,000.

Interest rates have continued to hover at almost Zero per cent on bank deposits, which is why more people began to invest in Bulgaria's real estate market in 2016. The growth in demand for cheap Bulgarian apartments and villas encouraged developers, and the continued rise in completed off-plan and pre-construction residential property transactions is most encouraging.

Polina Stoykova, the Executive Director of Bulgarian Properties, a leading estate agency, said that 2016 had been a very "dynamic year for the Bulgarian real estate market and for the first time in many years the trend has been entirely positive. Of course, there is always a risk when making a purchase in early stages of construction, but people are more willing to take this risk because currently demand is higher than the supply."

The fact that European citizens are now able to buy real estate, including land, has had a huge impact on the overall property market in Bulgaria, which is expected to remain strong throughout 2017, with demand in major cities, especially in the capital Sofia, to continue to grow. Supply is increasingly limited by fairly low levels of new construction projects. However, with the Bulgarian economy continued expansion, the construction sector should gain confidence and see better annual growth rates, too. According to the IMF, Bulgaria's economy is forecast to expand by a further 2.8% this year, having seen annual growth rates of around 1.5% since 2014.

Bulgaria's nationwide house price index grew by 8.82% during the year to Quarter 3 in 2016, according to the National Statistics Institute (NSI), and house prices increased by 1.59% during that same quarter (1.29% inflation-adjusted).

Before January 2012, foreigners were only able to purchase land in the name of a legal entity and could not own a Bulgarian property themselves. The lifting of this ban has enabled EU citizens to own a property as a private individual in their own name.

In Sofia house prices rose by 14.4% during the third quarter of 2016, and have continued to rise sharply this year. By contrast, house hunters in Varna saw an overall increase in house prices of 5.9% in that same quarter, and similar figures for the first six months of this year.

The most sought-after locations demand the highest prices, both in terms of asking prices for property purchases and in terms of rental values. In the city centre of Sofia and Lozenets district for example, demand for rental objects continues to be high, despite seeing the greatest increase in purchase prices in Bulgaria. Here prices now range from 1,200 to 1,500 euros per square metre. However, in the districts of Druzhba, Suhata reka, and Levski buyers could find apartments at an average price of 580 euros per square metre.

Head into rural Bulgaria, or to the Black Sea coast, and it's still a veritable buyers' paradise for those with small budgets. A one-bedroom apartment in Elenite, Burgas, typically costs around £40,000, while the same budget will buy a 3-bedroom detached house in Dryanovo, Gabrovo, and Polski Trumbesh, Veliko Tarnovo. For a very modest £18,500, on the other hand, one can buy a one-bedroom apartment at the southern Black Sea coast, in Akheloy, Burgas.

Bulgaria is also blessed with snow-capped mountains and ski resorts. In Borovets, a ski resort in Sofia region, a four-bedroom detached villa comes with a guide price of just £130,000. Bulgaria sees significant amounts of snow in winter, and can thus offer good holiday rental yields all-year round, not just during spring and summer.

Choose from our top ski properties

Check our properties in beach resorts