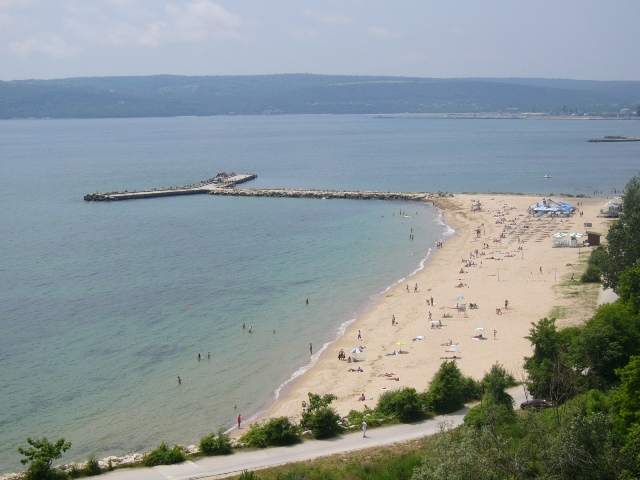 Unlike other cities, Varna has escaped Bulgaria's demographic problems - a low birth rate, an ageing workforce and high emigration - according to Kiril Yordanov, the mayor. Young people are flocking in, lured by jobs in retailing, tourism and a café lifestyle that compares, at least in the summer months, with that of Spain or Greece.

Varna's population has almost doubled since 2001 to about 600,000 people and is growing faster than that of the capital, Sofia. Investment in the same period exceeded 1.5bn, while unemployment is below 3 per cent, Mr Yordanov says.

"This is the only city in the country where the 18-30 year-olds outnumber the over-50s," he says.

Varna's transformation has taken place without the inflows of manufacturing investments that have enabled other neglected Balkan cities to prosper. But it has still managed to attract its share of foreign investors.

Fraport of Germany, which manages Varna and Burgas airports under a 35-year concession agreement, has undertaken to invest 400m in upgrading terminals and runways at both airports to international standards.

Eon, the German energy group, which acquired two electricity distributors in north-east Bulgaria following liberalisation of the energy sector, has set up a local headquarters in Varna's new business park.

Office buildings, warehouses and supermarkets are springing up along the airport road. Varna is a hub for tourists staying at St Constantine and Elena, Golden Sands and Albena, the three main northern Black Sea Bulgarian resorts which attract close to 3m visitors a year.

Jonathan White, a software expert from the UK who settled in Varna four years ago, says: "This is a good place to work because of the catch-up factor, which means there is a variety of opportunities."

In contrast with Burgas, Bulgaria's second port 130km further south, Varna lacks heavy industry - with the exception of a shipbuilding facility controlled by Navibulgar, the state shipping line, which is to be sold to KG Maritime, a German-led shipping consortium.

Teodor Rokov, a local historian, says that, if refurbishment continues at the current pace, Varna will overtake Odessa as the most attractive port on the Black Sea rim. "Our climate is better and the city is on a more intimate scale. In my opinion, there's nowhere in Ukraine or Georgia that matches it," he says.

Yet Varna needs basic infrastructure improvements to achieve its potential. The domestic terminal at the airport needs to be refurbished. It takes more than five hours to drive the 500km to Sofia on a poor-quality highway. The railway line, the first that was built in Bulgaria, needs to be upgraded and rolling stock renewed.

To a large extent, the retail sector is driving growth as Bulgaria's new middle class equips homes purchased with mortgages. By 2010 Varna will have four multi-storey shopping malls. The city is also the headquarters of Piccadilly supermarkets, the country's largest food-retailing chain, which was acquired last year for 100m by Delta Maxi, the retailing arm of Serbia's largest business group.

"The local customer base here is growing very fast, along with demand for more upscale products. Then you have added demand because of tourists and foreign home-owners," says Aleksandar Camparevic, Piccadilly's managing director.

Orchid Developments, a property company listed on London's Aim market, is building one of the largest shopping malls in south-east Europe in Varna, with 50,000 square metres of retail space available for rent.

Guy Meyohas, Orchid's chief executive, says: "We're more than a year away from opening and we've already accounted for about 60 per cent of the retail space, with some high-end brands appearing for the first time in Bulgaria."

Demand for better-quality housing, as well as tourist development, is causing the city to expand along the coastline in both directions.

Alfa Developments, a Bulgarian real-estate group, has acquired a former military barracks on a cliff-top site 15 minutes' drive from the port to build a self-contained neighbourhood with homes for about 4,000 residents.

"We want to create a real community with homes of different sizes and prices. It won't be a second-home development for foreigners," says Elitsa Panayotova, Alfa's chief executive.

Varna's ambitious master-plan, due to be implemented by 2014, would bring about another transformation. A 600m project backed by Japan's international investment bank provides for widening and deepening a canal linking the commercial port with a lake on the west of the city.

"The port is right in the middle of the historic centre of the city. When it is moved, we'll be able to create a unique waterfront for all our citizens to enjoy," says Mr Yordanov.
The shipyard and port facilities would be relocated on the lake, freeing up space for a large marina and new waterfront developments. A second bridge across the canal would be built to carry increasing numbers of trucks travelling from Turkey to central Europe.


Share
Euphoria Club Hotel & Resort - your paradise in Borovets!
Fully furnished studios, 1- or 2- bedroom apartments in a unique complex in Borovets. All-year-round complex with all needed facilities for your comfortable stay - lobby bar, reception, bar and restaurant, outdoor and indoor pool, SPA center, underground parking and many more. Choose your holiday home here! No buyer's commission! Suitable for rental income.
See More
Rural Houses in Bulgaria - wonderful in every season!
A real peace of heaven in the Bulgarian countryside! Your own holiday home in a magic world hidden from the stress and the noise of urban life.