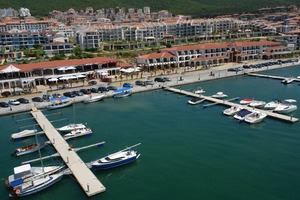 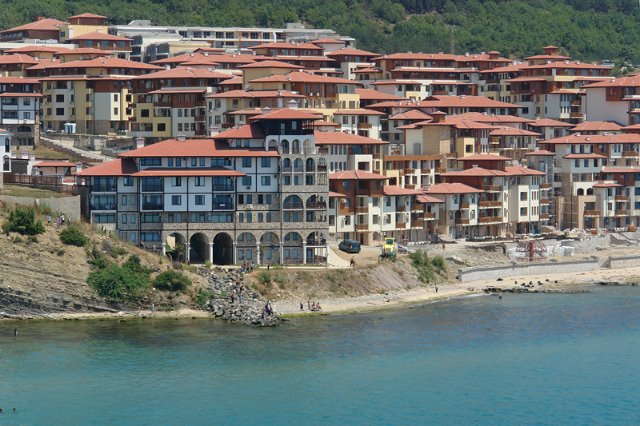 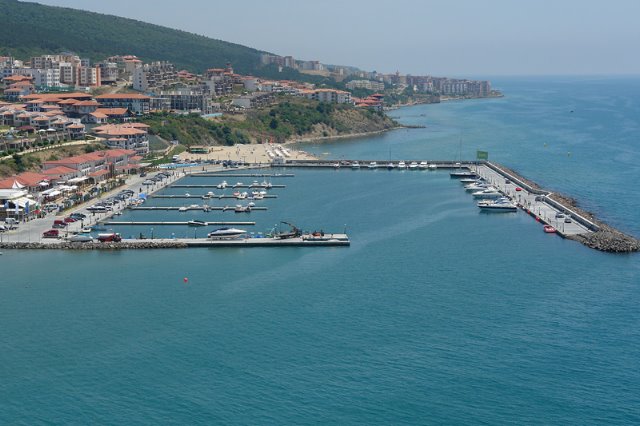 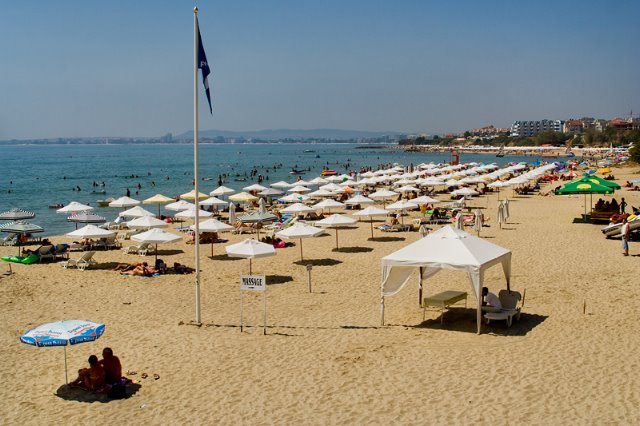 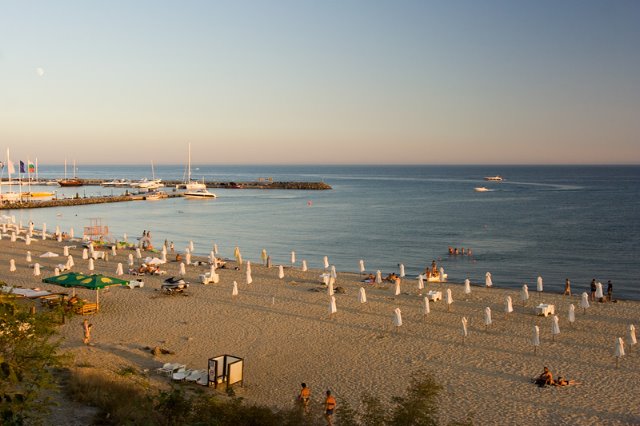 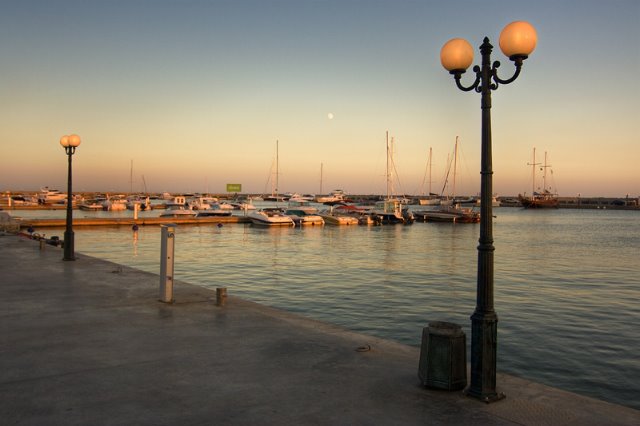 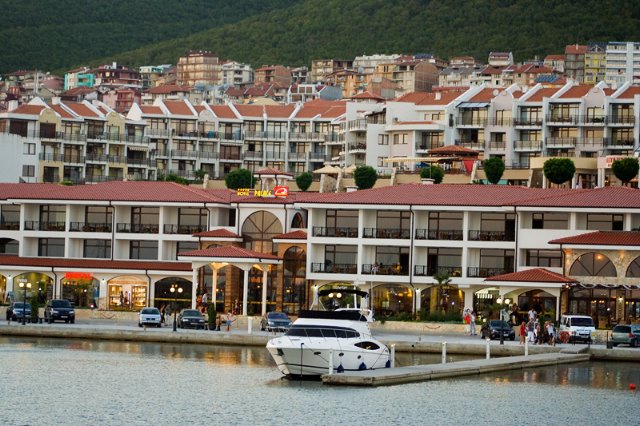 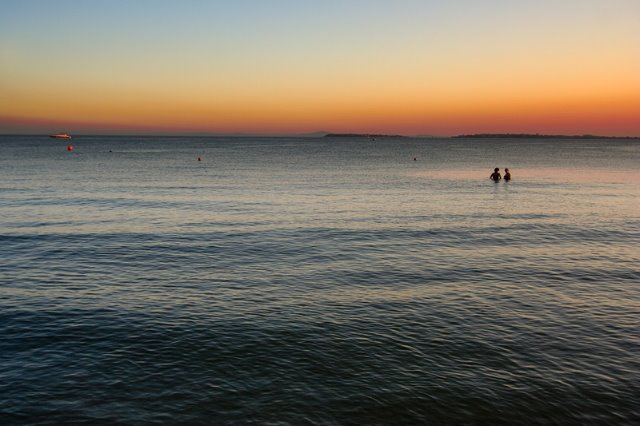 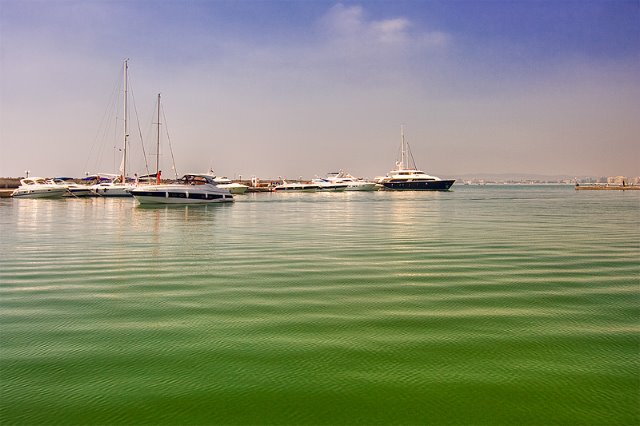 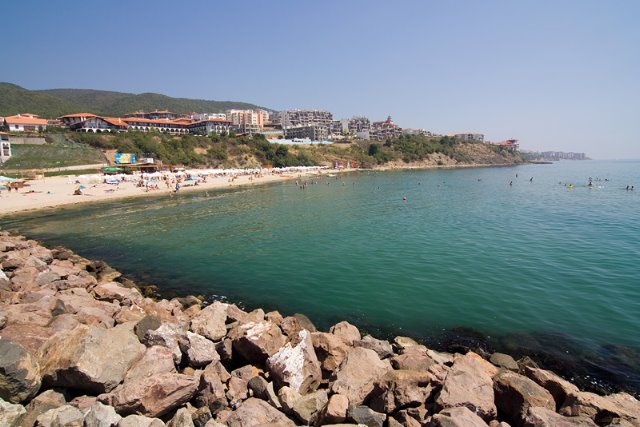 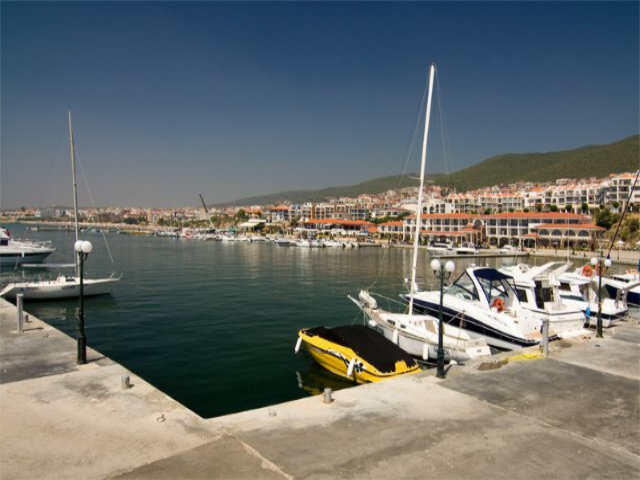 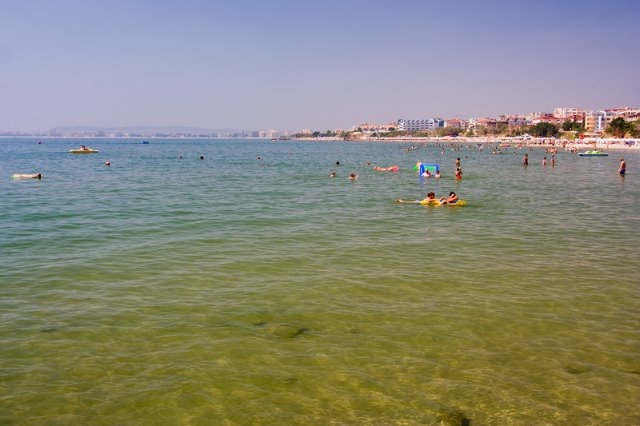 St. Vlas (known as Sveti Vlas in Bulgarian) is a beautiful coastal village situated just 5 kilometers north of Sunny Beach and 9 kilometers from Nessebar. This magnificent resort is a great combination of beautiful seaside at the foot of the Balkan mountain range. It has been developed into a modern beach destination during the recent years, with brand new hotels and tourist infrastructure. This makes it a preferred destination for holidaymakers, who want to enjoy the spectacular views of the mountain while having fun on the beach. The natural conditions - mountain, forest, sea and southern exposure of the mountain slopes, are extremely healthy and appropriate for a full relaxation. The beaches at St. Vlas are three with a total length of 1,5 kilometers - the central beach is the longest one, south of it is the small Camping beach and the third one is the beach nearby the new yacht port Marina. St. Vlas is the only place on the Bulgarian Black Sea coast where the beaches are facing directly south.

The town is also famous for its brand new and beautiful yacht port, which is being developed close to the water base of the local fishermen. Marina yacht port offers everything needed for a yacht lover to enjoy unforgettable summer holiday.

With it's sandy beaches and hilly backdrop, the picturesque village of St. Vlas is the ideal location to spend a relaxing week in the summer. Although the village is relatively quiet compared to its glitzy neighbor Sunny Beach, it makes for a better destination if you want to get away from the hustle and bustle.

St. Vlas is easily reached from Bourgas airport, which is only 25 minutes drive away. To the west is Sunny Beach, which takes a few minutes by public transport or a healthy half hour walk along the coastal path. In the opposite direction along the coast is the village of Elenite. Inland are the foothills of the Stara Planina mountain range, which spreads from the village right across Bulgaria.

The village has plenty of attractions for visitors. The most obvious are the wide south facing sandy beaches, which have activities for those who enjoy sports (from jet ski to beach volley) as well as those who simply love to relax with a cocktail and massage. During the winter months St. Vlas benefits from an ongoing development program.
In the heart of the village there are numerous restaurants, shops and cafés with panoramic views, which are ideal for an evening meal. Although St. Vlas has late bars, if you want to spend all night partying it is only a few minutes to Sunny Beach, which has a very active nightlife.

The village of Sveti Vlas (St. Vlas) is believed to have been founded by the Thracian tribe of Larisi in the 2nd century BC. At that time, it reportedly bore the name of Larisa. It was renamed 'Sveti Vlas' in the 14th century AC after the patron saint of cattle growers and merchants. During Ottoman rule (late 14th-19th century AC), the village appeared in administrative registrars as 'Manastir' ('Monastery') or 'Kyuchuk Manastir' after the five monasteries in the vicinity of the village. Unfortunately, none of the monasteries has been preserved up to present days. Officially, it restored its name of Sveti Vlas after the reunification of the Bulgarian state in 1886.

There is regular bus transport from Nessebar, Sunny Beach and Bourgas to Sveti Vlas, and plenty of private minibuses, route and ordinary taxis. There is also water transport to and from Nessebar and Bourgas to Sunny Beach. The international airport of Burgas is a 20 to 30 minute drive away and is served by international carriers and charter airlines from throughout Europe.

Request more information
Share
Properties in the Bulgarian Beach Resorts!
Check our selection of properties on the Bulgarian Black Sea Coast! Attractive prices starting from just 15,000 Euros for a furnished studio! Regular flights to Burgas and Varna international airports. Perfect for frequent visits, summer holidays and more.
See More
Properties with 360-degree virtual tours
Feel the unique atmosphere of Bulgarian properties with the virtual tours we offer! At any time, with just one click, you can travel to your dream home, with no need for appointments and trips.