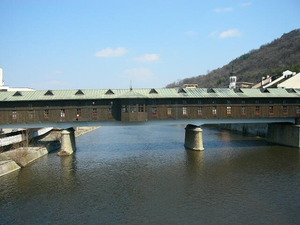 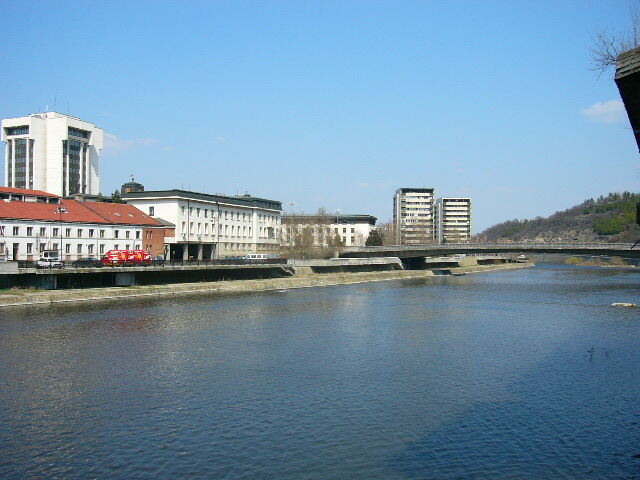 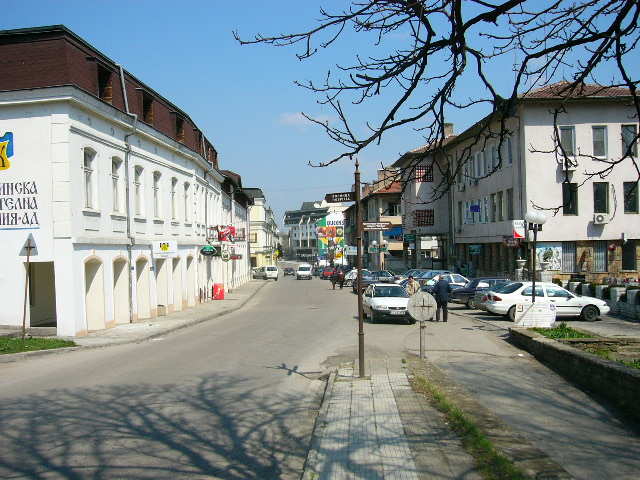 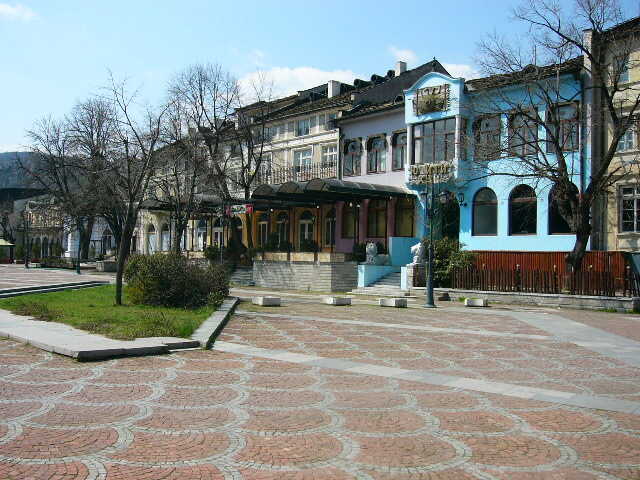 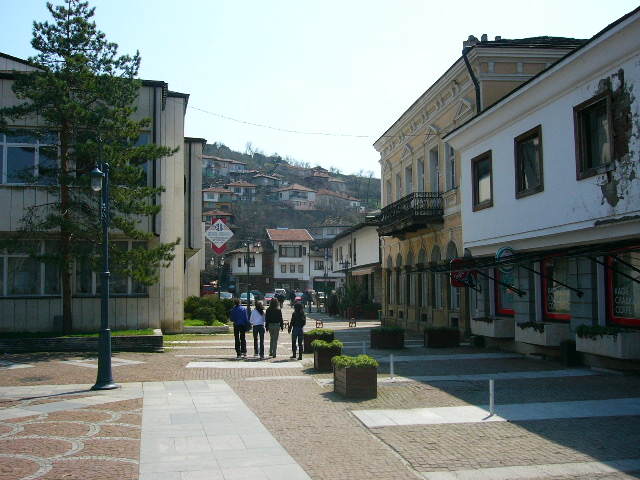 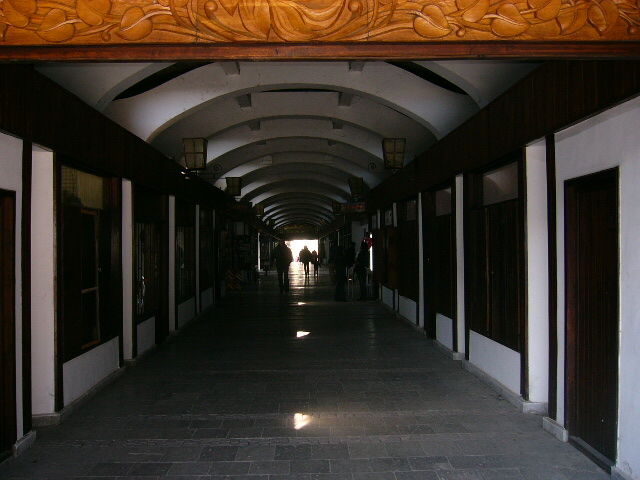 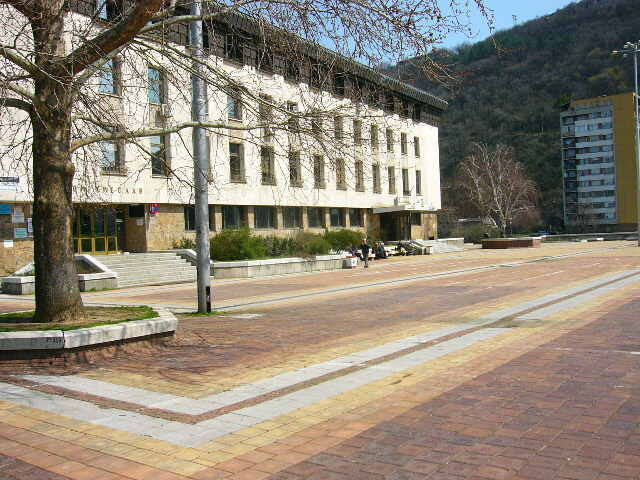 Walking along the old Roman road, which enters Lovech through the so-called Broken rock, it is easy to understand why Lovech is called the Town of the Lilacs. From its highest point next to the walls of Hisarya Castle, the lilac spreads as far as the eye can see, to the very border where the Danube plain meets the foot of Stara Planina Mountain. The River Osam passes through the rocks, making its way to the central part of the town.

Lovech has population of 45,000 people and is situated between the hills of Stratesh, Hisarya and Bash Bunar. The latter faces the town of Troyan and Stara Planina Mountain. There one can see two beautifully made fountains. An old legend says that everyone who comes to the town and drinks water from them stays here forever. On Bash Bunar hill is the Tabashka cave, where archeologists have found ancient stone remains. The lilac has literally captured the whole Stratesh Park. Here even in the winter days, there is a scent of spring.

In the very center of the town is the famous, restored Covered Bridge  a masterpiece of Bulgarian architecture, built by Master Kolio Ficheto. During the Ottoman times, Midhad Pasha asked the master to build something original  a bridge over the Lovech open market, under which the road between Sofia and Veliko Tarnovo could pass, and same time to join the two parts of the town that were divided by the river Osam. The genius builder studied the terrain on his own, prepared the materials and came up with a special design. The columns were strong and from stone, the construction above from wood. It was built without nails and joints, without estimation means, without a surveyors level and without cement.

Similar to the Florentine Ponte Vecchio, the Lovech Bridge had small shops under one roof. The master wanted people to feel that they are on a real market street. The bridge was finished in 1872. It was 10 meters wide with 64 shops. In 1925 the original bridge was rebuilt. Today the new one is also wooden and covered.

During the 12th Century, was signed a contract in front of the castle walls, according to which Byzantium recognized the independence of the Bulgarian country. With the so-called Lovech Peace from 1187, the Second Bulgarian Realm began. During the Middle Ages, the Lilac Town was central to the development of significant educational activity. At the end of 18th century there were 7 churches with a monastery school in each. Throughout its existence, Lovech has been an important military and trade center.

The area is also famous for its nature and tourist destinations:
The nearby caves are amongst the most popular in Bulgaria. The Dеvetashka cave is famous with its huge entrance chamber. During May there is the annual festival Lilac musical days. Lovech is also home to second largest zoo in Bulgaria.

The archeological reserve at Staro Stefanovo is 20 km away from Lovech. The town of the Troyan is 40 km is away. Lovech region is the northern gateway to the Troyan-Kalofer Mountain which is part of the Central Balkan National Park. The most beautiful and highest areas of the Stara Planina Mountain are close by.

Houses of Rеnaissance architecture have been preserved

Only 35 km from Lovech is the mountain resort of Beklemeto, which offers great conditions for winter tourism. There are 2,5 km of ski runs, with the best cross-country skiing and biathlon training areas nearby in a deciduous forest, all meeting European requirements. There are 170 snow days in the year. Beklemeto is also a starting point for many hiking routes in the Stara Planina Mountain.

Very close to Lovech, on the edge of Kozya stena peak is the village of Chiflik. It is situated on the upper part of the river Beli Osam, in between deep forests and beautiful, Alpine style landscape. There is an attractive resort complex here, built next to the extremely powerful mineral springs that flow at 3000 liters/min with a constant temperature of 52C. The water is used to cure many ailments, in the various hotels and therapy centers in the resort.

Another place of interest is the Kukrinsko Hanche (Kakrins Inn) Museum which is located in the village of Kukrina, at the distance of 17 km to the east of Lovech. After the treachery of a priest called Krustyo, on 26th December 1872 the Apostle of Bulgarian Freedom Vassil Levski was captured here and later hanged.

Another item to distinguish the sightseeing are the churches 'St. Bogoroditsa' ('Holy Mother of God') and 'St. Troitsa' ('Holy Trinity'). The first one with its original carved wooden altar and icons-masterpieces of the Bulgarian Revival art is declared a monument of culture of national significance.

'St. Troitsa' Monastery was built in 1868 and after the Liberation it became a cathedral temple.

Stratesh park is located on a hill with the same name in the northern part of the town of Lovech. It is built up with the volunteer help of the citizens of Lovech. The asphalt alleys curve along beautiful lakes, alleys full of flowers, decorative trees and bushes. The Alley of the Bulgarian-Russian friendship is a memorable sign for the Russians soldiers who have died during the liberation of Lovech on 22.08.1877. In the eastern part of the park you can visit the second biggest zoo in Bulgaria with various animal species.

Twenty kilometers from the city, on the right bank of the river Osam, those interested in caves can visit one of the biggest caves in Europe - 'Devetashkata Cave'. According to archeological research, it sheltered people since the late Paleolithic era. Devetashka cave is a monument of culture and a place of national and international significance and protection. The Devetashka cave is settled only at the distance of 15 km to the north of Lovech. It is one of the biggest caves in Bulgaria. This natural phenomenon is about 1500 meters long and has huge entrance - 35 m high. A Bulgarian scientist discovered the cave in 1921.

In the vicinity of Lovech people can visit several interesting places, among them 'Glozhensky' Monastery (1224), the mountain resort 'Ribaritsa' and 'Saeva dupka' cave. According to annals of Glozhensky monastery, the cloister was built in the 13th century by the Ukrainian prince Glozh, who settled in the area with the agreement and help of the Bulgarian king Ivan Assen II. Close to the village of Glozhene (named after him) and the river of Cherni Vit, Prince Glozh established a cloister, dedicated to St George the Victorious, an icon of whom he carried all the way from the Ukrainian lands. According to the legend, shortly after the establishment of the monastery, the icon repeatedly disappeared from the cloister, only to be found later on a hill not far away from the village where currently lies the present-day monastery. Those inexplicable disappearances of the icon were interpreted by the monks as a gods sign that the monastery had to be moved to the hills, which they eventually did in the end of the 14th century. For a short period of time, the two monasteries existed and functioned together, connected by an underground tunnel. This underground shortcut was used more than once by the Apostle of Freedom, Vassil Levski as an escape route while fleeing from his Ottoman persecutors. Unfortunately, the tunnel was filled up and became unusable after an earthquake in 1928. The monastery church was beautifully decorated with wall paintings, which unfortunately existed only until 1913 when an earthquake ruined completely the church. The present-day church was built in 1951 in the place of the preceding one and represents a relatively narrow but a high building. The Glozhene monastery is located amid the natural beauties of the Northern Balkan mountains. Despite its name, it is in fact closer to the village of Malak Izvor, than to the neighbouring village of Glozhene. It is built right on top of a mount and resembles a castle when viewed from a distance.

The village of Ribaritsa is one of the most picturesque village in the Teteven region and the most invested in either. It is located at the foot of the Teteven Balkan, settled to the river banks of Beli Vit. Ribaritsa village has numerous little country houses and villas, lost among flowers and greenness. Here is situated the National Park Central Balkan and the biosphere reserve of Tsarichina. From the village of Ribaritsa there are roads to the town of Teteven, Sueva dupka cave, Shipkovo mineral baths, the Glojen monastery, the town of Troyan and the Troyan monastery.

The Sueva Dupka Cave with its length of 400 m. is interesting for different cave species. Scientists found that primitive man inhabited the cave and they found various objects including a coin with the image of the Roman emperor Antoninus.

Enjoy photos from the town of Lovech, the town of Teteven and the village of Ribaritsa Teteven_Ribaritsa
*You need WinZip or other .zip software to open the .zip file. If you can't open the file, please download EnZip