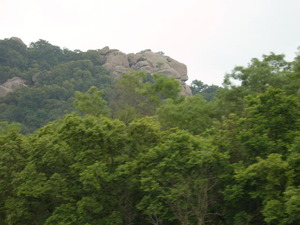 The mouth of the Kamchia River is one of the most beautiful sights of the Bulgarian Black Sea region. It is situated 34 km south of Varna, and 504 km east of Sofia. The region is typical with its large beaches, starting from a place called Paletsa in the north and ending at the Black cape near the village of Shkorpilovtsi in the south. The recently built resort complex forks at the river mouth into Northern Kamchia and Southern Kamchia. The merging of two small rivulets springing from the eastern Balkan Range  Louda Kamchia and Golyama Kamchia, forms the Kamchia River. Running down through the Balkan Range it meanders through woodlands called Longoza.

Over 40 species of beautiful trees and many species of bushes grow in the forest. Ferns, reeds and yellow water lilies also grow here. Some tourists claim that the place is the earths paradise; others call it a fairy tale place.
The Ropotamo River, Dyavolska River and the Veleka River have similar geological structures  sand stone, clay loam formations covered with wild vegetation in the quiet and large firth. Once Kamchia was called Panisos and the Slavs called it Ticha. Its contemporary name is of Kouman origin. The Romans built a stronghold called Erite on its left bank.

The Lipovani tribe settled on its banks; actually they were offspring of Russian followers of the Gregorian Calendar who came here from the mouth of the Danube. Nowadays the frequently flooded area is a reserve that is under the
protection of UNESCO. The reserve is 40 km in length (throughout Longoza to the river mouth) and 5 km in wide in some parts. There are does, deer, Seahawks and eagles, wild boars, wild cats, etc. The resort complex of Shkorpilovtsi is near the village of the same name, and it spreads to the white cape in the south. There are camp sites on it, the Sunrise camp site, and the Horizon camp site. There is enough open space in the village and enough restaurants and pubs in both the village and camp site. One can go on foot to the Black cape, hanging over the sea, with its old oak tree forest, and its spring of cold water. Far to the south there is a gulf with a fountain drawing its water from the Black cape. Opposite it is the White cape with its lime rocks.

Search For Related Articles In Our Article Section


Share
REALTONS PLACE - luxury offices for rent with a top location in Sofia!
Looking for a new comfortable office to grow your business? We have one of the best offers on the market in a preferred business area around mall Paradise Center and metro station Vitosha. Have a look at the available premises and contact the responsible consultant.
Realtons Place will be ready for the new business season in September 2022.
See More
Properties in the Bulgarian Beach Resorts!
Check our selection of properties on the Bulgarian Black Sea Coast! Attractive prices starting from just 15,000 Euros for a furnished studio! Regular flights to Burgas and Varna international airports. Perfect for frequent visits, summer holidays and more.
See More
Rural Houses in Bulgaria - wonderful in every season!
A real peace of heaven in the Bulgarian countryside! Your own holiday home in a magic world hidden from the stress and the noise of urban life.