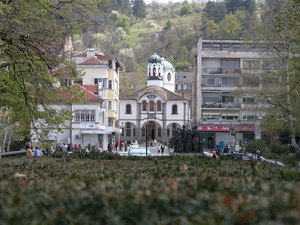 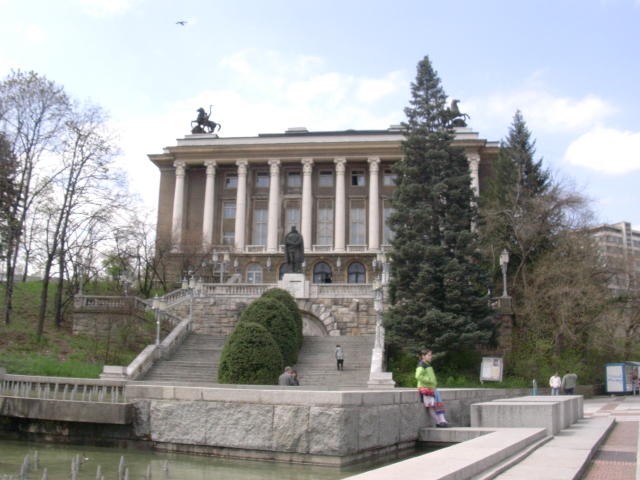 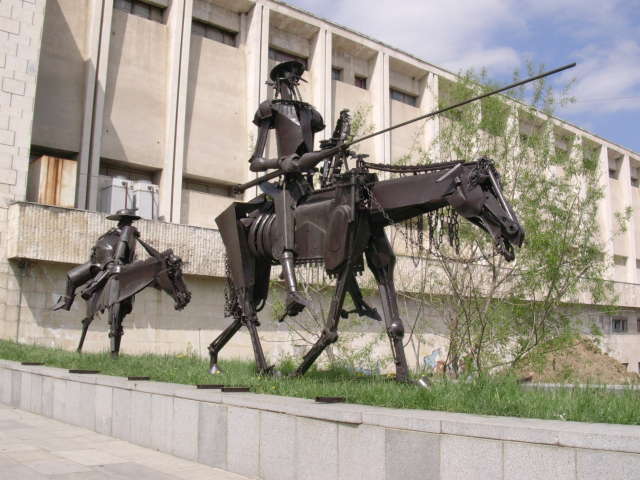 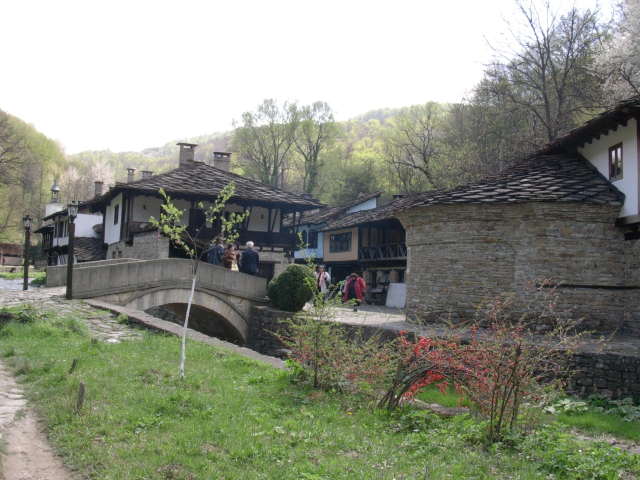 Gabrovo is an attractive tourist center for its clear mountain air, historical, ethnographic and cultural monuments. The region of Gabrovo is considered to be one of the most ecologically sustainable areas of Bulgaria, confirmed by the rich flora and fauna. Some of the best hunting trophies in Europe such as bear and red deer can be found in the region.

The town of Gabrovo itself is an important center of electronic engineering, food processing, textile and shoe production. It has a rich cultural life, too - a lot of theatrical, musical and folklore professional groups, a puppet-show, pantomime theatre, Gabrovo chamber orchestra, etc. The tourists can visit the Historical Museum, the Art Gallery and the National Museum of Education.

But the most attractive part of Gabrovo are the older quarters, lying beyond the Igoto Bridge on both sides of the River Yantra which carves through the long town centre. A statue of Gabrovo's legendary sixteenth-century founder, Racho the Blacksmith, stands on a rock in the river.

To the Bulgarians, Gabrovo is primarily known as the center of humor and satire. In the House of Humor and Satire you can see various art and ethnographic exhibitions and collections - paintings, humorous writings, photos, carnival masks and costumes from all over the world. A Festival of Humor and Satire takes place each May with thousands of world famous humorists from more than 150 countries.

Aprilovska secondary school - Museum of education The school was built in 1872 with donations from the merchant Vasil Aprilov and it was named after him. The ground floor of the two-storey building is a library, the top floor, reached by an outside staircase - the class rooms. The National Museum of Education is located in the building of Aprilovska secondary school - the first school in the country to offer a secular education in Bulgaria.
The main sight of interest near Gabrovo's central area is Detchko's House, a remarkable example of a restored 19-th century town house. Originally built for a local businessman Hadzhi Detchko in 1835, the house was used later as a school and during the Russian-Turkish war of 1877 as a temporary hospital for Russian soldiers. Today, you can enter elegantly furnished rooms which sometines accommodate concerts and exhibitions.

Images from the town of Gabrovo

Uzana is a mountain locality near Gabrovo which is in fact the geographical centre of Bulgaria. Uzana is a suitable place for winter and summer holiday. Here you can do some skiing, horse-riding, mountain-climbing, etc. The Lyulyatsite Resort is famous for its favourable effect on some pulmonary diseases.

The Assumption Monastery (Sokolovski Monastery) lies 12 km from Gabrovo. It was built on a vertical wall in 1833 and its school became a centre of education. The monastery gave shelter to many rebels and during the Liberation war it was turned to a hospital. A humble museum collection keeps evidences of the disobedient and thirsty for knowledge spirit of the local people. Its old icons painted by Zahari Zograph and the wooden iconostasis are among the masterpieces of Bulgarian art. The church is an amazing creation of the church revival architecture and icon painting.

The most picturesque place near Gabrovo is the Architectural and Ethnographical Complex Etar - a unique open-air museum. It was built in the middle of 20-th century in the vicinity of the town of Gabrovo - an old industrial centre of Bulgaria. The Bulgarian Renaissance atmosphere of 19-th century is recreated there by the old-time workshops of traditional Bulgarian art and crafts. The museum features over 20 Bulgarian crafts like woodcarving, bread and candy making, herb gathering, cutlery, pottery making, weaving, etc. Craftsmen are at work here most of the day. These are 15 samples of houses with a workshop and a small shop on the first floor and exhibition of museum items on the second floor.

The buildings are differentiated in three groups - workshops, a trade centre and the third group of buildings has public functions (a clock tower, a church, bridges, stone fountains, gravestones). All the activities in the workshops are done by hand or with the help only of water-driven machines, most of which are unique and unknown in Europe. All major religious and folk festivals are celebrated here. There are some hotels, restaurants, and taverns available. The unique atmosphere and the excellent service make Etar a favourite place for tourism and leisure.

The village of Bozhentsi is a small picturesque village situated at the foot of Stara Planina at about 15 km. from the town of Gabrovo and about 50 km from the old Bulgarian capital Veliko Turnovo. The village is more than 600 years old and nowadays it is an architectural reserve. About 100 of the well-preserved houses on the both banks of the river Bozhanka are restored in the same condition as they were 150-200 years ago during the period of the Bulgarian Renaissance.

Till the end of the 19th century Bozhentsi was an economic, administrative, educational and spiritual center for the surrounding villages. Now the village has several vivid taverns, cafes, souvenir shops and many small private hotels well known for the hospitality and delicious Bulgarian cuisine they offer. Another interesting fact about Bozhentsi is that many Bulgarian writers, artists and architects live there.

If you decide to go for a walk down the narrow cobbled streets of the village you will definitely feel the atmosphere of the past when you see the beautiful white houses covered with stone slabs, the high stone walls, the massive oak gates, the stone water fountains and bridges and the small workshops. Now the shutters of the workshops are closed but tourists can still visit the wax workshop which is turned into a museum. When you enter an authentic house in Bozhentsi, you will notice the unique interior design from the 18th and 19th century. The architecture of the houses is unique, too. It is open and turned to the street. The ground floor usually consists of household and trade premises - cattle sheds, stables, storage rooms, cellars and shops. An outside staircase leads up to the veranda and then the first living room, the kitchen and the bedroom. Large corner fireplaces are typical of the Bozhentsi interior.

When you come to Bozhentsi, don't miss the chance to visit St. Elija Church. This building is almost 200 years old and has three naves, massive stone walls, vaults and cupolas. A curious thing about the village is that its inhabitants succeeded in gaining permission to build a belfry, which was prohibited by the Turkish authorities at that time. The bell was brought from the distant Russian town of Tula.

Images from the village of Bojentzi

The town of Dryanovo itself is situated near the Dryanovo River in the Fore Balkan. It was an agricultural and crafts centre during the Revival period, a birthplace of the self-educated architect and master builder Nikola Fichev (Kolyo Fitcheto). Interesting places for sightseeing are the Town Museum of History, the Museum of the Bulgarian Revival Architecture 'Nikola Fitchev'; the churches 'St. Nikola' (1851) and 'St. Troitsa' (1897); the Old bridge built by Kolyo Fitcheto etc.

Museum exhibition Koliyo Fitcheto
Koliyo Fitcheto is Bulgaria's best-known master builder (born in 1880 in Dryanovo). His churches, bridges and other monumental works are seen throughout Northern Bulgaria. The exhibition shows his life, scale-models of his masterpieces and their fate. The collection of masonry, stone-cutting and woodcarving tools represent the potential of the building techniques during the Bulgarian Revival.

Dryanovski Monastery of St. Achangel Michael is situated 4km south-west of Dryanovo, in the beautiful valley of Dryanovska River on the rocky slopes and cliffs rising high around the place. It was founded in the l2th century and became one of the big national centres of literature. During the Ottoman yoke it was destroyed several times. Almost ruined after the Ottoman invasion, the monastery buildings were restored in 1880 (soon after the Liberation) with public donations.

Dryanovski Monastery was one of the centers of national liberation upheaval during the struggle for Bulgarian independence. A local uprising started in May 1876 under the leadership of Bacho Kiro and the monk Hariton. Several hundred rebels defended the monastery for almost a week against 10 000 Turkish troops, whose commander offered to spare Bacho Kiro's life if he publicly repented - and receiving a refusal he hanged him.
Next to the church there is an ossuary raised in memory of the perished insurgents. In the monastery there is a museum collection with exhibits from all historical epochs including neolithic finds from the Bacho Kiro cave. The cave itself was declared à natural landmark. The complicated labyrinth of cave galleries with length of about 3 600m. has several levels and according to the researchers, the forming of the cave continued about 1 800 000 years. Different objects were found - blades, knives, weapons and tools made from bones, etc. Some of the finds dated back to 40  70 thousands years B.C.

View our properties for sale and rent in/near Gabrovo

*You need WinZip or other .zip software to open the .zip file. If you can't open the file, please download EnZip


Tweet
Share
Vitosha View - an exclusive residential development in Sofia
Vitosha View is a gated complex at the foothills of Vitosha Mountain. It offers urban environment combined with the home atmosphere and the greenery of a beautiful garden. Vitosha View enjoys an attractive location and is perfect for investment in the Bulgarian capital.
See More
Borovets Gardens 2 - the second phase of the popular complex
Feel at home in Borovets! Buy your own vacation apartment in one of the best rated complexes in this top mountain resort. Progressing construction with planned completion in December 2020 for the new winter season. A wide range of available apartments at attractive prices, suitable for rental income.
See More
Beach Villas on the Bulgarian Black Sea Coast
Searching for your own place in the sun?
Explore our selection of lovely houses and villas situated in the beach resorts and in the villages nearby! Prices with no competition in Europe!
See More
Follow us