The British Are Willing to Reduce Sale Prices 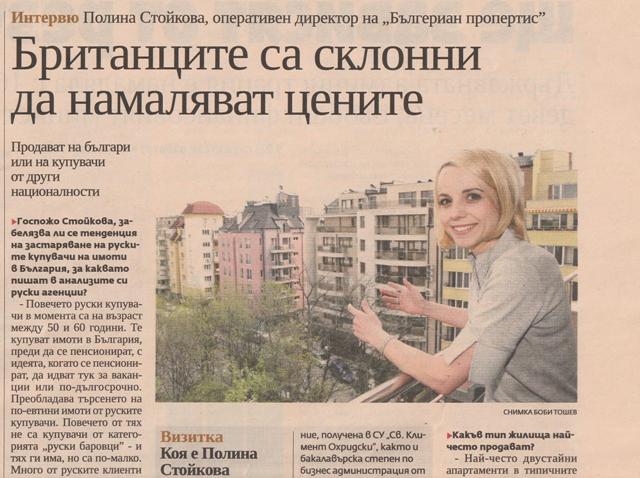 Ms. Stoykova, is there a trend showing an increase in the age of Russian property buyers in Bulgaria, as Russian agencies have been writing in their analyses?
At present most Russian buyers are between the ages of 50 and 60. They buy properties in Bulgaria before retiring planning to come to the country after retiring during vacations or for a longer period. Russian buyers look mainly for cheaper properties. Most of them do not fall in the category of the wealthy Russian though there are such as well, but fewer. Many Russians are sentimental when choosing Bulgaria to buy a property. They buy because of their childhood memories when they used to come to the Bulgarian seaside. Moreover, they are attracted by the Bulgarian culture which resembles their own and by the fact that they can communicate with the people here.

Apart from Russians who are the other foreign property buyers in Bulgaria?
Despite the crisis there are quite a few British buyers as well  last year they were the biggest group among the foreign buyers. They mainly look for cheap rural properties. The nationalities of the property buyers in Bulgaria vary greatly  from buyers from our neighboring countries and from other parts of Europe, from Russia and other Russian-speaking countries to buyers from faraway destinations like Australia, the USA, Canada and even China.

A very important issue that has to be raised is the right of foreigners to buy houses with gardens and apartments with ideals parts of the land  currently they do not have that right and foreigners cannot buy land as physical persons. That is why they have to register a company in Bulgaria in order to buy a house with a yard - this is not a complex procedure but it raises the expenses of the purchase and puts off some of the potential buyers. It is time we considered allowing foreigners to buy houses with yards and apartments with ideal parts. This and the low property prices in Bulgaria would attract a lot of foreign buyers.